February 13, 2012
On the occasion of completing reviews on the 1964-5 season of Doctor Who, I should like to re-imagine it as a role-playing game campaign using Cubicle 7's DWAITAS RPG. (See Season 1) 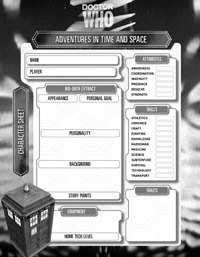 GMs: Passing the torch and passing the torch again
At the end of the previous season, GameMaster David had announced to his group that while he was willing and able to start a new season with them, he was moving after Christmas and would give the GM's reigns to his friend Dennis. One of the players, Carole Ann, who was thinking about leaving, was convinced to stay until then so David could give her a proper farewell. It would be up to Dennis, the new guy, to find a replacement for her, which he did (see The Characters), but other commitments would make early success give way to less stellar efforts on his part and he, too, would leave the group before the end of the proposed season (along with two other players). He ropes Donald into acting as GM for the season finale - he's accepted to take over from Season 3 anyway.

The Characters
-Billy's had his fun playing with his Doctor as foil for the rest of the group, but for this season, he wants to mellow the character a bit and get into the action more. Consequently, when the GM gives him story points to put in his stats, he puts them in Fighting and Coordination.
-Carole Ann's Susan is on her last legs, well, ankle, so she makes no adjustment to the character.
-William continues to play Ian Chesterton, and puts his points in a Time Traveler Trait (Tech Level 2), so he can better use swords and other antique weapons.
-Jackie does the same with Barbara (though not for weapons' sake). These two players embrace the new group dynamic of having a gentler Doctor, and decide they'll alternate between a certain irritability themselves (at still being lost in time) and an acceptance of their situation, resulting in heroism.
-Two other players would join the group this season, Maureen and Peter. See The Rescue and The Chase below for more.

Planet of Giants.
Before David leaves as GM, he's got a couple ideas to work through. One of these is a "sideways" story in which the TARDIS materializes in shrunken form and the characters have to interact with a giant garden. But not interact with giant humans, as it turns out. Because the size difference between the PCs and the NPCs is so great, he plays the giants almost as a separate thread, letting the players take on the roles of evil businessmen, blind scientists, doomed government evaluators and nosy operators for the "larger" scenes. Whenever they make those characters do something that puts their main characters in danger, they earn Story Points. For fun, David helps the players visualize their environment by leading them to places around the house and yard, tiny miniatures in tow.

The Dalek Invasion of Earth.
David wants to make his last game (and Carole Ann's) special so he brings back everyone's favorite monsters from the first season - the Daleks! To raise the stakes, he makes them invade Earth in a sort of Nazis-win-WWII scenario. Landing the Daleks in London makes the story more personal, and Carole Ann prepares for her departure in those last 6 sessions by making Susan fall in love with a Resistance member called (coincidentally?) David (the sexual politics of the gaming group may not be the same as the ones on the show, you understand). Billy quite liked the relationship between his character and Carole Ann's (and regrets having missed one of these final sessions), so he writes a speech just for her, to great acclaim from everyone at the table.

A guest player called Ann came in to play Jenny, a resistance member who's hard a hard life, but she declined the invitation to become a regular player. And though the Daleks are soundly defeated, everyone hopes to see them again (as long as Dennis can also do The Voice), even if their pet Slyther was something of a failure: 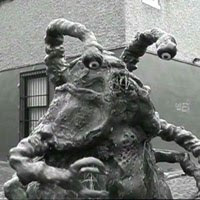 The Rescue.
Dennis takes over as GM, and his first order of business is a couple of short sessions just to introduce a new player to the group. Maureen's been told about Susan and understand the niche that needs filling. She'll create a teenage girl whom the Doctor can take under his wing to keep his grandfatherliness alive (important to Billy). Like Susan, VICKI will be from a high-tech culture and know more history and science than the average bear, but unlike Susan, she'll be peppy and enthusiastic, even impulsive. The background she develops with the GM sets the stage for those introductory sessions, making Vicki an orphan primed to board the TARDIS. Her first story is a mystery with a faux-alien and some Indiana Jones-type traps, and Maureen is quickly accepted into the group, though disappointed Jackie shot her pet sand beast. As it turns out, Dennis didn't really want Vicki to have a pet monster so steered her away from making it an eternally-available Gadget.

The Romans.
Dennis is as new and enthusiastic about running the game as Maureen is about playing in it. He's not above toying with the premise. His first historical makes good use of the Roman Empire and all its trappings, but he decides to play the Court intrigue as comedy. It's a success because the players throw themselves into it as well. Barbara's in a bedroom farce, and Vicki switches poisons around, and the Doctor plays on Nero's ego. Barbara and Ian delight in a hedonist shtick. And together, they all choose to avoid walking in on each other and pretend they weren't all in Rome together. There's a certain pleasure in that. 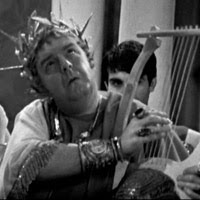 The Web Planet.
Another experiment on Dennis' part, he plays world-builder to create an environment completely alien to the players and their characters. Not only is it an odd insect world and the TARDIS is acting strangely, but he's set up blinding bright lights around the room, makes everyone talk into paper towel tubes, and uses strange gestures, intonations and vocabulary on all his aliens. An interesting experiment, though the players are glad to get out of there. Perhaps more fun for the GM, this one. 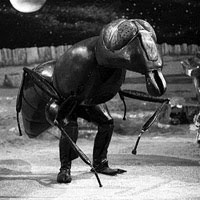 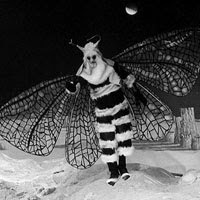 The Crusade.
After the bizarre Web Planet, it's back to History. Dennis does his research and gives the Saracen as much respect and character as he does the English knights. William's character gets knighted, which he finds awesome, and has to rescue Barbara from a harem, while the Doctor and Vicki deal with King Richard and his sister's intrigues. By the 4th session though, something changes in the GM's life and he'll have trouble making things come together. The Crusade's finale lacks the research and characters from the first three and from now on, it'll really feel like he's improvising more than preparing.

The Space Museum.
Case in point, this SF story. There's some weird temporal shenanigans, which creates a potentially interesting "prevent our own future" plot, but it gets a bit lost when the GM invokes the rebels vs. overlords cliché, and fails to make any of those guest characters live. At some point, he decides to make this a comedy, but it's tepid, and based on the idea that everyone but the PCs is incompetent. Though the players generally have fun with it, it doesn't create a memorable world or adventure (in this case, Billy doesn't mind he missed a session). Ah well...

The Chase.
Dennis has run out of ideas, so he continues to phone it in. The Daleks! They're favorites! That should work! Let's give them time travel too, and have them chase the TARDIS across time and space! Under-developed locations and plots are the result, as every story is aborted by the Daleks rushing in and forcing the characters to leave. Dennis also plays the Daleks as a bit silly, which is disappointing to the players. Dennis has to admit that he's not doing right by the players and corrals another GM in their gaming club, Donald, to finish the series for him and tells the players the last chapter of The Chase will be his last. Unrelated to this, Jackie and William will also be leaving the group after this season, maybe they should just quit with Dennis, seeing as there's a Dalek time machine in the story that might be used to get the characters home, hm?

Turns out Dennis had brought in his friend Peter at one of the Chase sessions so he could try out the game, giving him scenes with the players and Daleks as a clownish hick from Alabama. A quick call is made, and Peter accepts the invitation to join the group, but not as "Morton Dill". He makes another character, a stranded astronaut from the future who can take Ian's place as action hero with a minimum of fuss. The last chapter of The Chase introduces this new character, Steven Taylor, as a prisoner of the Mechonoids, Dennis' own version of the Daleks. He, Jackie and William all leave on a high note after all. 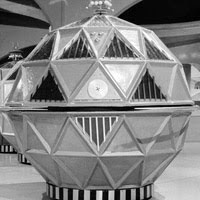 The Time Meddler.
New GM Donald is keen to make his mark, so he introduces a new Time Lord in the form of the Meddling Monk and things will never be the same... With Ian and Barbara gone, he strikes an agreement with the players that the next season won't be in the "Lost in Time" mold, allowing the characters to act as heroes wherever they go (as opposed to principally wanting to explore or escape), even if they won't really be in control of the TARDIS. 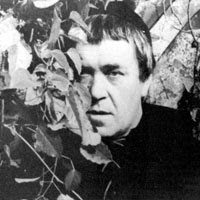 Billy, Maureen and Peter have a good dynamic going already, and agree to follow Donald on to a third season (though Billy's really got to stop missing one session out of every four). Coming your way in about 40 days!
Doctor Who RPGs Seasons of DWAITAS

Siskoid said…
I might believed in a connection, but Chaselon first appeared 4 years before the Mechonoids. Unless the Who production team was hoarding Green Lantern comics.
February 14, 2012 at 5:17 PM