June 20, 2012
On the occasion of completing reviews on the 1967-8 season of Doctor Who, I should like to re-imagine it as a role-playing game campaign using Cubicle 7's DWAITAS RPG. (Go back one, to Season 4) 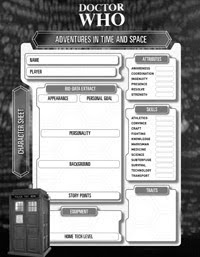 The GMs
The best way to imagine the Doctor Who campaign's set-up at this point is as a role-playing club that can draw on a pool of GameMasters and players who would otherwise be working on other games. The game's fifth is a season in search of a consistent GM. Victor gets things rolling with a first story, but it was only ever going to be a one-shot deal. Peter takes over after that for three stories, introducing a couple of new threats the players responded so well to, they're bound to make a comeback. And Derrick finished the season with three more stories, in his case bringing BACK old monsters already used this season. If there's a repetitiveness to the plots this season, it's in part because new GMs are always trying to get their footing by using tried and tested tropes, and even monsters. The latter at least helps build the game world's mythology.
The Characters
-In Pat's second year playing the Doctor, he'll get away from some of his sillier eccentricities, talking less about hats and only rarely bringing his flute to game sessions. Part of it is having to step up as more of a hero figure because the character of Victoria Waterfield isn't nearly as independent as the Polly and Ben duo was, and another part of it is a lack of motivation brought on by normal fatigue. Pat actually misses a couple sessions this year. Something that's working well is his chemistry with Frazer, and these two are having a ball sparking off each other.
-With Ben and Polly gone, Frazer has room to make Jamie a lot more heroic and willful. Fewer people around the table seems to be a good thing, though the GM sometimes has to charge Story Points for some of the anachronistic things Frazer wants to do with his 18th-century Highlander. Like Pat's, his character adopts a protective stance towards Victoria, but perhaps puts a bit more in the way of adolescent pangs into it, though they never really play a romantic relationship there.
-Debbie basically inherited the Victoria Waterfield character from the GM, an NPC designed as a damsel in distress that she got to control for her introductory session. Interested in Victorianism, Debbie fiddled with some of the skills, but kept the character wholesale. Unfortunately, the original design always showed through and made Victoria act like an NPC a lot of the time, more damsel in distress than protagonist. Good for accumulating Story Points, but ultimately not all that interesting to play. The player strategy would eventually have important consequences, creating an opportunity to quit the game, which Debbie seized upon, giving another player her chance (see below).
The Tomb of the Cybermen. Victor's one story brought back the Cybermen in a riff on Curse of the Mummy stories, essentially putting the characters in a "dungeon" filled with traps. The game imagined the future of the Cybermen and gave them a more powerful leader type, the Cyber Controller, and metal familiars, the Cybermats. The previous GM, Gerry, may have invented them, but other GMs are now embracing them and adding to them like other have done with the Daleks. The Abominable Snowmen. In taking over the campaign for a semester, Peter wants to try out two new monster designs. The first is the Yeti, robot versions of the legendary Himalayan apemen, controlled by a Lovecraftian entity called the Great Intelligence. Peter brings his knowledge of Buddhism and his experience with the Call of Cthulhu RPG to bear in this adventure set in a Tibetan monastery. By this time, the players are used to continuity plug-ins justified by the Doctor's long life span, so starting adventures with an ancient artifact already in the TARDIS that must be returned to the monastery is par for the course. To increase the creep factor, Peter does a fair split personality bit with the character of the possessed master, and takes Debbie out of the room to give her hypnosis directives to increase the paranoia.

The Ice Warriors. Peter's other idea is the Ice Warriors, warlike Martians found preserved in a glacier overrunning the Earth. He's also thinking about how to make the games deeper, so a theme of man versus machine is built into it, and though the monsters are the main threat, the humans and their inability to act without their computer's instructions shouldn't be discounted. Frazer has a scare when an Ice Warrior weapon paralyzes him from the waist down, but the GM has no intention to make that permanent. 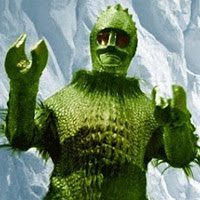 The Enemy of the World. Out of monster ideas, Peter tries something else - a mad scientist story where - twist! - the bad guy, Salamander, looks just like the Doctor. Truth be told, the GM's done everything he wanted to with Doctor Who, and is moving on to a high-espionage type game à la James Bond 007. Except he HASN'T moved on. Cooperative to the last, his players accept the infiltration mission the NPCs give them, but it's an ill fit for the rest of the campaign, and the players will later be heard to remark they weren't really in character there. Interesting wrinkle: Pat asks if he can play the part of the villain, since they look so much alike. The GM agrees if the Doctor finds a reason to sit out of the action for most of play and pays for any conclusions drawn from out-of-character information he learns with Story Points. Feeding him pertinent information as they go along, it gives Pat a chance to play (with an accent!) different scenes as a manipulative heavy, which he greatly enjoys. There's a fun confusion when the other players think he's one and not the other (passing notes and having discussions outside the room helps), but having a player controlling the villain does have some strange effects. For example, where the GM might have killed Salamander in the final cave-in, Pat makes the rolls for him to survive so he can escape and infiltrate the TARDIS! The GM's solution to have the TARDIS take off with its door open and suck out the character was a bit of an anti-climax, but Peter wanted to tie things up before leaving the reigns to the next guy.
The Web of Fear. Having discussed the season to date with Peter, Derrick decides to bring back the Yeti (not sure his drawings are any less cute than Peter's though) and the Great Intelligence. He set the story in the London underground 40 years after the first, and even reuses the character of Travers. His ideas are of variable quality: Dimming the lights (good), giving the Yeti web-gun (weird), and giving Travers a scientist daughter (unfortunately bad for Frazer and Debbie who have less to do). This last effect is compounded by the mid-game arrival of guest player Nick as Colonel Lethbridge-Stewart, who does a great stiff upper lip bit and becomes a quick ally of the main PCs (though since he was suddenly brought in by the GM, he is suspected of being a mole). Nick had previous played a semi-companion back in Season 3, then promising to play again when he could find the time. To up the tension, the GM uses a black marker to scratch out sections of the London underground being invaded by the Intelligence's fungus, making it close in on the players with each successive scene. 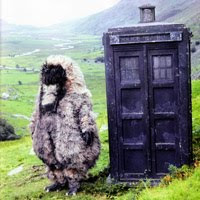 Fury From the Deep. Derrick continues to shine in the atmosphere department, this time bringing sound into the mix, a looped heartbeat that comes up everything the monster arrives. That monster is Derrick's first original creation, a sort of telepathic seaweed that takes control of people and turns them into gas expellers (man, you do NOT want to see Derrick mime that stuff, it is CREEPY!). He's playing a bit rough however, and Debbie in particular gets the brunt of it having to spend Story Points to bring herself back from the dead after she's been sniped, gassed and foamed. That adds a level of Unadventurousness to her character sheet, from which point she starts to play the trait to the hilt, fully intending to leave the group to respect her character's "death". Derrick at least provides a happy ending for the more positive NPCs, giving her a home away from the TARDIS. But who will replace her?
The Wheel in Space. Stepping up to take Debbie's place is Wendy. Her character idea is girl from the future called Zoe who is almost a living computer, quite good with facts and figures, but emotionally stunted (more oblivious than robotic). The GM quickly builds an adventure scenario around the concept, using a monster on hand - Cybermen again - and a space station under fire. Zoe appears in the second session as her character sheet is finalized, and she immediately sparks off Jamie, their two players having great fun playing up their very different origins and wold views (sadly, it's one of those sessions Pat had to miss). Of course, this change of direction to introduce a new companion has taken its toll on the GM. The story isn't very well thought out, the Cybermen are badly used, and the NPCs rather lackluster. Let's just say Derrick isn't very good at improvising. 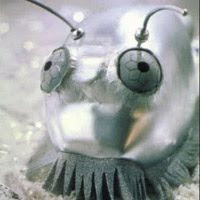 The good news is, Derrick has agreed to run some sessions in the next season, and Pat, Frazer and Wendy are already gelling well as a group. Would you believe it will all be their final season? Stay tuned!

Jayunderscorezero said…
I would totally read a whole blog dedicated to reimagining genre fiction as RPGs, just sayin'.
June 20, 2012 at 6:18 AM