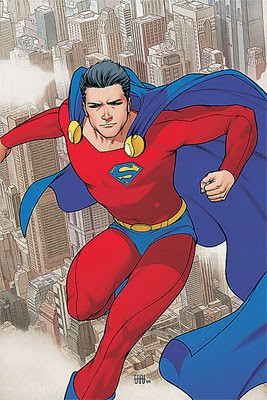 Throughout his career as the Teen of Steel, Kal-El encountered a number of youth who, like himself, fell from the stars (or something) and had an awesome amount of power. Brothers-in-arms? Potential mentors or mentees? Rivals? Frauds? All sorts. And I was waiting on summer vacation to broach the subject. Next Reign, I'll try covering as many Superboy Analogs as I can, but as an introduction, let's talk about the best-known and longest-lived (almost literally) Superboy Analog of all - Mon-El!

He first appeared in Superboy #89 in a story called "Superboy's Big Brother". Because it was 1961, the story is hugely convoluted, with an amnesiac Mon-El crashing down to Earth in a rocket, with a note from Jor-El to his son in his pocket and a Kryptonian medallion around his neck. Superboy comes up with all kinds of reasons why this is even possible (suspended animation and varying rocket prototypes and such), and quickly assumes that Mon (so named because he arrived on a Monday) is his itherto unknown older brother. And together, they fight crime and play baseball with rocks on other planets. Just like anyone would. 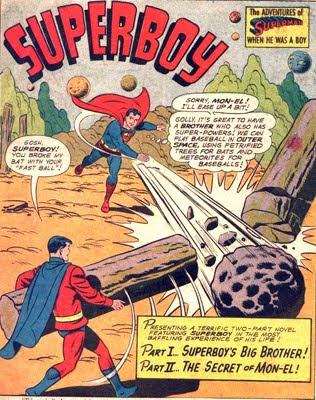 But soon, Superboy starts to distrust him, and it has nothing to do with the fact that Lana's interested in the new boy, honest! There's this belt not made of Kryptonian metal, see, and that Krypto doesn't recognize him. So Superboy exposes him to kryptonite and it has no effect, so then there's this whole plan to catch him in the lie that involves painting lead cannon balls green to see if he reacts. He does of course, because he's allergic to lead instead of kryptonite. The pain of the lead poisoning shocks his memory back, and he reveals he's an astronaut from Daxam who landed on Krypton JUST as it was about to blow, and Jor-El quickly gave him messages to give his son if he ever went to Earth. But now he's dying of lead poisoning and it's all Superboy's fault, so he Teen of Steel projects him into the Phantom Zone to save his life.

It's the same basic story as "Superman's Big Brother" from Superman 80 (1953) AKA Reign of the Supermen #198, but the ending has that important difference. If Mon-El had gone via rocket, that would have been the end of it, as it was for so many others, but the Phantom Zone? Guys in there have a habit of coming back to haunt Kal-El.

The next year (Adventure Comics #293), Mon-El made a cameo in a Legion of Super-Heroes story, warning Superboy that an evil Legion was about to free the Phantom Zone villains. 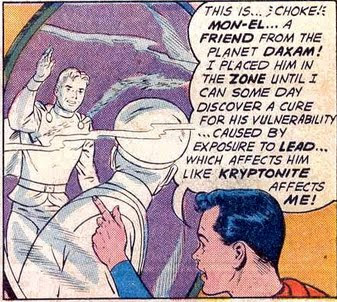 So he wasn't forgotten, and this sewed the seeds of his eventual Legion membership. Through 1962, he was Superboy or Superman's ally in the Phantom Zone whenever Clark had to visit or look in, and in Adventure #300, he was rewarded 1000 years hence with a temporary serum that restored his health and allowed him to fight alongside the Legion. Brainiac 5 eventually developed a more permanent cure, and Mon-El finally joined in Adventure #305 (another convoluted tale in which a cured Mon-El poses as Marvel Lad so the other kids don't get their hopes up until he can prove he's really free of the illness. He's still got to take a dose every 48 hours though, but let's not call it a drug dependency, ok? 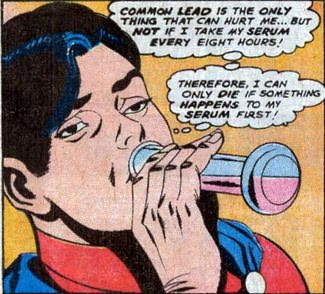 Obviously, Mon-El wasn't his real name, so at some point it was revealed it was really Lar Gand, but he kept the name Superboy gave him as a tribute to the El family. And so it went until 1986 complicated things with the Crisis, but nothing really changed right then. Mon-El's interactions were with the Time Trapper's pocket universe. Fine, but after that Superboy's death, Mon's timeline is corrupted and he dies during the Magic Wars. Apparently due to the machinations of the sorceress Glorith, Lar Gand is rebooted as Valor, a 20th-century hero cured of lead poisoning by Vril Dox who becomes the timeline's new inspiration for the Legion, and as a seeder of worlds, makes it possible for all those super-powered races to exist in the future. It is later revealed that Glorith guided his journey in an attempt to fix the timeline she destroyed when she accidentally killed one version of Valor. (Still with me? I'm not sure I am.) She uses Waverider to patch a Time Trapper-created Lar Gand into the timeline and guides him to do the tasks he was known for, shunts him to the Bgztl Buffer Zone (a rose by any other name...) to get picked up again in the 30th century where he joins the Legion as M'Onel.

When we pick up the thread again, it's 5 Years Later, and the "Glorithverse" is undone, Mon-El is married to Shadow Lass, and later on, a younger clone of Lar Gand, part of the Batch SW6 Legion, is also having adventures. Confusing mess? Well, that just gave DC an excuse to reboot the Legion AGAIN in Zero Hour. Lar Gand had still been Valor, but his amnesia prevented him from really remembering it, and he is placed in the "Stasis Zone" by the Connor Superboy until the 30th century when Brainiac 5 gives him an improved version of the anti-lead serum. The team decide not to tell him he was Valor, and he takes the name M'Onel, which is apparently Martian for "He Who Wanders". This version of Lar Gand is lost in a time vortex in The Legion.

The Legion undergoes its so-called Threeboot, in which Lar's days as Valor as apparently erased, and he is found in the Phantom Zone, mad from a thousand years of sensory deprivation and dying of lead poisoning. He gets a temporary reprieve, but must return to the Zone. As it turns out, the stories in Supergirl and the Legion of Super-Heroes weren't the future of New Earth, but of the prior DCU, so who the hell knows.

How about we try to fix it with Infinite Crisis? In this version of DC continuity, Lar Gand's ancestor was worshiped on Earth as a Mayan goddess, but returned to Daxam before giving birth here. Centuries later, young Lar gets his hands on her spacecraft and tracks her original journey back to Earth, where he has an adventure similar to the one from his original Silver Age origin. As Superman, Clark takes him out of a collapsing Phantom Zone in the 21st century, where he is saved by anti-lead serum mysteriously left by a Legion from the future. As Clark's British cousin Jonathon, he settles in Metropolis, where he does the superhero thing while Superman is off to New Krypton, adding the "S" shield to his costume. At the end of the story line, Mon-El's antidote has worn off and he is placed in a restored Phantom Zone for the next 1000 years. There, we'll find that Infinite Crisis' delayed effect has restored the pre-Glorithverse Legion and Mon-El pretty much had his pre-Crisis adventures. For a short while, he becomes a Green Lantern AND Legion leader, but finds doing both is a bit taxing. 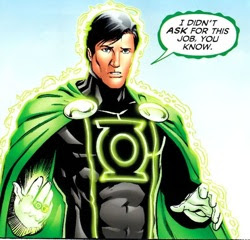 And post-Flushpoint? The Legion doesn't seem to have been affected. But if there's one thing Mon-El's convoluted, corrupted history has shown, it's that it's probably just a matter of time.
Comics Legion Reign Silver Age Superman

Siskoid said…
Ahh yes. I knew it was Doctor Who-related, but I spazzed on that one. Threeboot Mon-El then only appears in pages copied and inserted from a cancelled comic.
July 21, 2012 at 2:25 PM