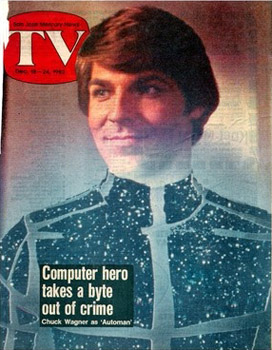 The orange robot at the top of page 1 of Who's Who vol.2! 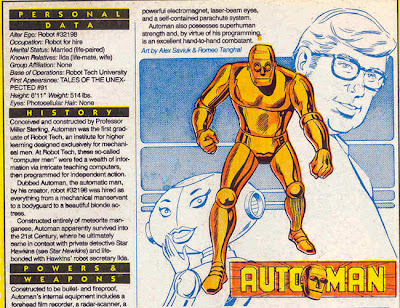 The facts: Though his Who's Who entry makes it sound like he was a regular in the Star Hawkins strips, Automan was the lead in only three stories in Tales of the Unexpected (though he was never the lead story) between 1965 and 1966 (issues 91, 94 and 97), and his connection to Star Hawkins was created for a "Whatever Happened to Star Hawkins?" back-up in DC Comics Presents #33. Though Bob Haney and Lee Elias created the character, Haney would only write one more story (Otto Binder may have written the third), and Elias was unconnected to the later chapters (with art by Bill Ely and Jay Scott Pike).
How you could have heard of him: He was one of the guys who built Sean McKeever's Enginehead, though you're forgiven for thinking he was Cliff Steele (Robotman). His body was seen in Legionnaires #66 as well.
Example story: Tales of the Unexpected vol.1 #91, his first appearance. 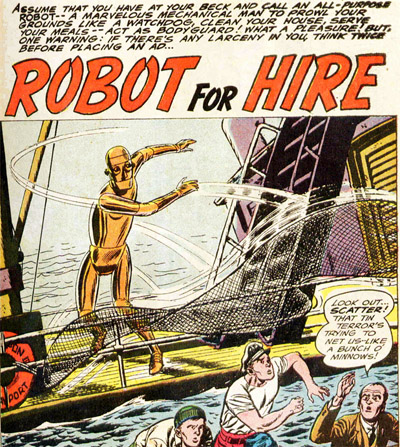 "Robot for Hire", to my surprise, and again it's because of that Star Hawkins/shackin' up with Ilda retcon, takes place in a contemporary setting. Robot #32196 AKA Automan is the first and brightest graduate of Professor Sterling's school for robots, as he explains to Mr. Billings of the Clarion. The two of them are played by Siskel and Ebert. 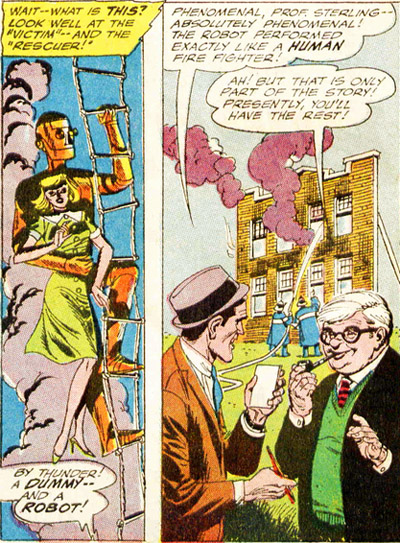 Robots at this school aren't just trained in everything they need to serve Man - from defending us against invading aliens to table manners and baseball - but to develop a human-like instinct as well. 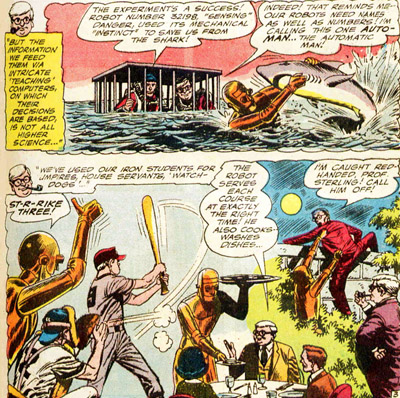 Shark-wrestling is also on the curriculum. But Prof. Sterling is a savvy businessman too, and Automan is soon put on the market as a Robot for Hire. His first job is to work for a Mr. Rankin whom we soon learn makes his dirty money thanks to a smuggling operation. What happens when a robot is asked to commit crimes? 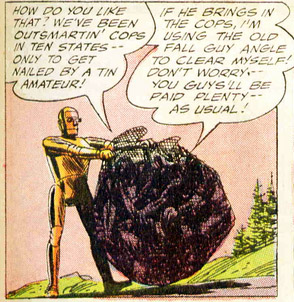 He goes all Asimov on Rankin's ass! Drops the "cargo" into the ocean, captures the bad guys, calls the cops, and even taped the whole thing so he could turn State's against his employer. 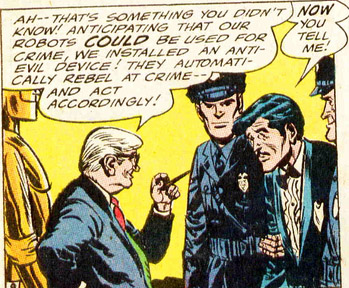 Wonder if they still got paid? Automan would get other jobs over the coming months, like playing bodyguard to an actress who accidentally picks up a spy's luggage, and helping a scientist test his Mutant-Man powers, but alas, if readers expected more Tales of the Unexpected starring the coppery robot, they never materialized. Possibly, Robotman's similar appearance kept him from showing up with any kind of frequency in the DCU. Ah well. But take note! It looks like 30 pages of material is enough to get a solo hero into Who's Who (if only half a page). Is that the lowest the bar was ever set? Who's This? will test that notion!

Who else? One a couple of pages later, there's ANOTHER character I really want to check out. And I'm not gonna wait. The Balloon Buster hits the SBG... TOMORROW!
Comics Who's This?

Martin Gray said…
Ah yes, I was expecting Robotman too, getting myself mixed up ... wasn't he called Automaton on a My Greatest Adventure cover?

Siskoid said…
Automan was a rebound after Ilda's long-term relationship with G.I. Robot went bad.
November 26, 2012 at 10:42 AM

De said…
I think the prize for least amount of appearances and still getting an entry is tied between Aegeus and Invisible Destroyer. Each had two appearances total.
November 26, 2012 at 6:21 PM

Siskoid said…
You know you're just providing motivation to feature those characters in Who's This? don't you?

Invisible Destroyer wins the obscurity battle, appearing in Showcase 22's second story, and JLA 41. That's a paltry amount of exposure to get a full pager!
November 26, 2012 at 9:46 PM

Jeremy Patrick said…
Automan cooks, does dishes, *and* fights off sharks? I could sure use a robo-nanny . . .