Who's the Balloon Buster?

November 27, 2012
Who's This? They call him Balloon Buster, but he's really Lt. Steve Savage, it's just that Who's Who did so hate to use a real person's name (Jimmy Olsen is under E for Elastic Lad, and Alfred Pennyworth under O for Outsider, a monster he became pretty rarely). Steve Savage, Balloon Buster, whatever. He captured all our imaginations thanks to a wonderful Joe Kubert illo on Volume II's third page. 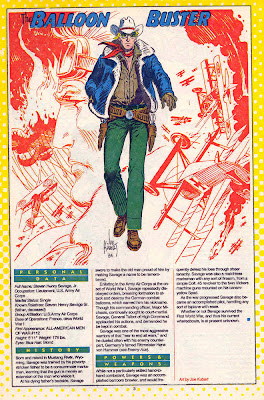 The facts: Savage first appeared in All-American Men of War #112 (1965), by Robert Kanigher (who wrote all his stories) and Russ Heath, and only put on his trademark cowboy hat in 113. 114 was drawn by Joe Kubert, 116 again by Heath. Star-Spangled War Stories reprinted some of the material in the early 70s, with new stories pitting him against Enemy Ace in #181-183 (1974) with art by Frank Thorne. He met Enemy Ace again in a three-part back-up in Unknown Soldier 262-264 (1982), this time with art by Dan Spiegle.
How you could have heard of him: The match-ups with Enemy Ace were reprinted by Enemy Ace Archives (vol.2) and Showcase Presents Enemy Ace, and James Robinson made Savage a descendent of western hero Scalphunter in a Starman story.
Example story: Because it had to be the Kubert issue, I've chosen All-American Men of War #114 (1966), conveniently reprinted in Star-Spangled War Stories #163 (1972). 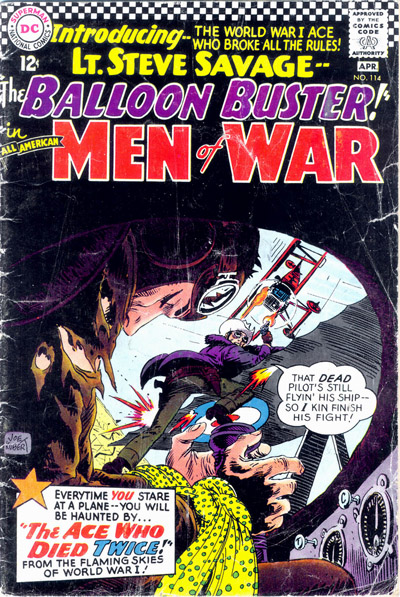 Ok, I'm gonna use a lot of panels from the issue, because holy crap, this comic is pretty exciting. Let's start with Lt. Savage's origin story. Steve was raised by his poverty-stricken father in Wyoming to become an expert marksman. The Savages got no respect, and Steven was quick to get into scraps when the townfolk would accuse him being good-for-nothing like his pa. Having made him a deathbed promise to make something of the Savage name, Steve leaves town. Kanigher doesn't let him leave until he's visited by a ghostly voice though!

YORE TH'GUN!!! Don't worry, the strip doesn't then turn into an air force version of the Haunted Tank (not that there would be anything wrong with that!). Instead, Savage becomes a flying ace, who seldom plays by the rules, in WWI France. He earns his nickname by destroying a good many German observation balloons (from which the "Krauts" view battles and gain a tactical advantage). By this, his third story, he's already made a name for himself and an enemy pilot with lots of coffins painted on the side of his plane, called the Undertaker, is sending him a message loud and clear. 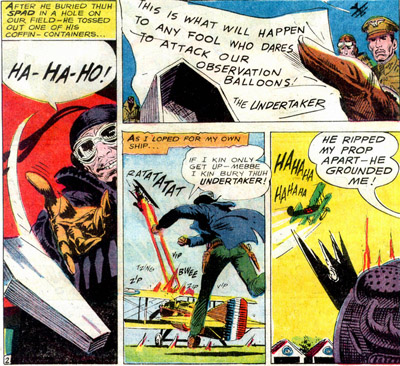 Savage's plane needs to get fixed, and on his next sortie, he's up against a TRAIN that's dragging  two observation balloons. Between the steam engine's speed and the train's arsenal of weapons, busting these balloons his harder than usual. But remember your pa's advice, Steve! 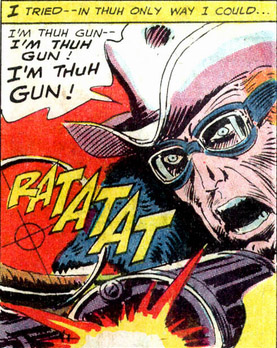 Yeah, there's a lot of that. He does the stupid/brave thing and goes after the locomotive when everybody thinks he'll keep making passes at the balloons. Result: It all goes boom. However, Savage can't catch a break, and when he returns to base, he finds a couple of enemy pilots, the Undertaker's wingmen, have followed him home and are strafing the air crews like crazy. That's Savage's cue for some UPSIDE DOWN ACTION! 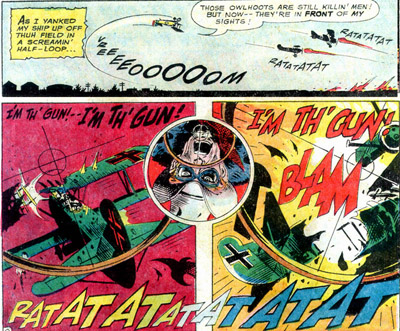 He's a hero, right? Wrong. There's this Canadian major that's always up his ass giving him crap (that's not a mixed metaphor, is it?) who wants to court-martial him for the deaths in the ground crew, and it's only a general's wish to keep him flying and busting that saves him from that fate. To celebrate, Savage steals a motorbike that night and heads into town. Almost immediately, the Gerries start bombing the place and Steve has to save a French girl, and to take her mind off the danger, he puts on a record and plays it real loud.

And he's doing this WOUNDED. Before he can, uhm, earn his wings, one of the girl Denise's brothers, Raoul, shows up at the house. His plane's been crashed in the attack, and their other brother's been killed... by the Undertaker! Savage, already in trouble so big whoop, lends Raoul his plane so he can finish the fight. But when the allied army see them, they think they're thieves or spies and start firing.

That's right. Savage feels safer on the wing of a plane in the middle of a dogfight, than on the ground explaining himself to his unit. Soon, Raoul's been fatally shot, and it's only his need to avenge his brother that keeps him flying while Savage... BECOMES TH'GUN! 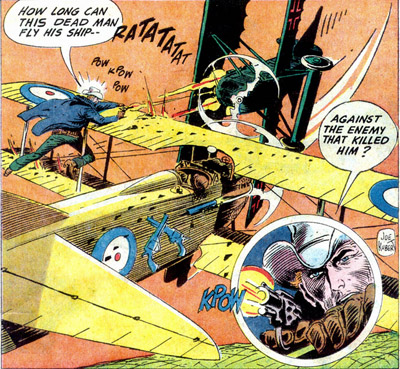 And yes, that's how he downs the Undertaker. As Raoul dies, he takes his place at the controls and meditates on the fate awaiting him at base, knowing he did right by a brother in arms. Verdict: AWESOME!

Who else? Who's Who Vol.II includes a few other lesser lights, but are they "lesser" enough to show up in Who's This? Bat Lash has recently appeared in All Star Western. Ben Boxer, maybe? Or are we all Kamandi experts? If you have any requests, let me know and I'll hit them on the second pass. For now, I'll be perusing Vol.III...
Comics Who's This?

Anonymous said…
I'm surprised no one at DC had the idea to make Balloon Buster the long lost relative of Vandal Savage in some sort of Demon Knights/G.I. Combat crossover.

I guess some miracles exist after all.

De said…
Blackbriar Thorn might be a good one. He apparently only appeared once and still received an entry (I suppose since he was going to appear in Crisis). Subsequent appearances are pretty scattered and few. Can't believe I didn't think of him before.
November 28, 2012 at 11:56 AM

Siskoid said…
B.T. was in one of my first DC Comics (his first appearance), so it seems weird for me to rediscover him, as it were.