January 14, 2013
In the spirit of each successive season seen as a role-playing campaign in the Doctor Who RPG, Ian has surrendered his character sheet before leaving. (Click to enlarge for legibility.) 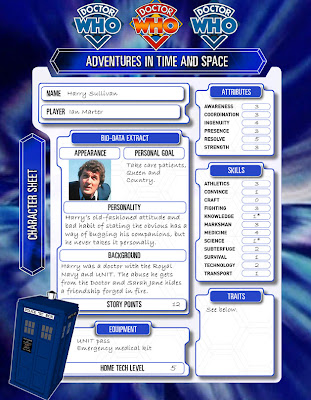 Stuff that didn't fit on the sheet and kept on the back...

FAVORITE METHOD FOR ACCUMULATING STORY POINTS
If there's a hole in the ground, or the mouth of a giant mutant clam, Harry's foot more often than not finds its way into it. His player became quite good at gauging what dangers Harry could quickly get out of, and would choose failure over rolling the dice to make his Navy man as much a scapegoat as his companions made him out to be. To his credit, he never hoarded the Story Points so-gathered, and spent them freely to free the friends who were so hard on him.
Doctor Who RPGs Seasons of DWAITAS