Why the Legion of Super-Heroes? 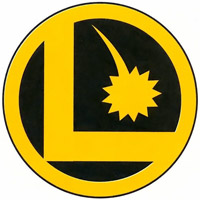 I'm a big fan of the Legion, but I'm often asked why. It seems there are two kinds of comics fans - those who love the Legion, you might say, unconditionally, and those who don't see the attraction whatsoever and wonder WHY so many of us care about these practically-outside-continuity heroes with dated Silver Age names like Cosmic Boy and Lightning Lad. I mean, LAD?! LASS?! Lame, right? Just like those hokey and silly Silver Age stories. And then there's the continuity mess left by a series of reboots, 5 years laters, cloned returns and their very own Crisis. A team with some 30 members? Who can follow that? How aren't they all ciphers? Right?

I completely get where you're coming from, Legion fans-to-be (yes, I hold out hope), so let me attempt an explanation. After all, what would Question Week be without the answers?

To me, the Legion has the same draw and attraction other detailed worlds do. I'm talking about Star Trek and Doctor Who, and yes, to a point, the mainstream DC and Marvel universes. There's something special about the geek cred one accumulates by becoming an expert on a truly immense fictional universe. It's where I draw the line between mainstream genre pieces and the truly geeky niches where I want to live. And the more removed that world is from the real one (so if it doesn't take place Earth Present), the better, because you can't take 90% of the reality for granted. The Star Trek universe has dedicated fans in large part because there's a whole universe to explore, and it'll take you 28 seasons and 11 movies to do so before you even consider extracanonical material. When the task is that big (bigger in Who's case), there's geek pride in undertaking it, in mastering it. 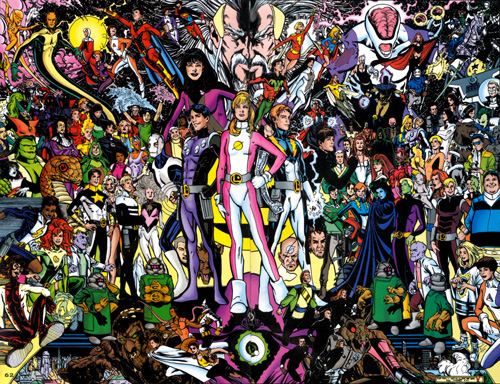 The example easily extends to the Legion. The 30th/31st century is its own universe, with its heroes and villains and key relationships, but also its coherent technology, its recurring planets, its own politics and culture. The Legion has a huge roster, a constitution filled with rules, and its own traditions (the try-outs and the inevitable rogues spawned from rejection, for example). Current scribe Paul Levitz' original 80s run, which is where I came in, tapped right into that with frequent use of "Encyclopedia Galactica" captions that described locations, people and technologies, and gave the world a sense of being as well thought-out as Tolkien's Middle-Earth. I might find the Silver Age stories as amusing as crazy Superman stories of the same era, or read the 70s stuff to see young Jim Shooter or Mike Grell honing their craft, but it's the 80s that most feel like world-building to me. And 5YLs and clones and reboots? They're thought experiments to see what this world would look like in the future, or remixed in some way, and say what you will about any of these permutations, Legion fans still find enjoyment in tasting the new blend of their favorite universe.

So what's the difference between the Legion and other comics? Sure, the DC Universe is (or perhaps I should say was) a big place, a coherent reality where many titles co-exist. And you might feel the same exhilaration at discovering its more obscure corners, or understanding as much of the 75-year-old tapestry as you can. But if you take DC history as a whole, it's too big for any one person to collect and read it all - the Legion is more self-contained and thus, coherent - and the fact that most comics take place in the present (or a well-known past) takes a lot of the world-building away (though DC's fictional cities do help in that sense) - the Legion is its own world and thus, much richer. It's why Legion Lost doesn't really work, whereas I remain committed to the main LSH book, meandering storylines and all!

I understand why people who feel intimidated by Trek, Who or Legion, or just been confused and disinterested whenever they've come in, in the middle of things. But I hope they'll one day hop aboard a Time Bubble and find the perfect gateway into this wondrous future world where everyone wears spandex and knows how to read Interlac (I know *I* do). And together, we might raise our fists and shout: "Long Live the Legion!"
Comics Geeks Anonymous Legion

I've been a Legion fan since the 80s as well and for me 2 other things stick out, the Legion's long run and the willingness of creators to make changes.

First off the long run, the fact the LSH goes from a Flash Gordon future to a 70s Star Trek and spandex universe to a grim 90s crappy universe is great. The Legion is always a reflection what we want/expect the future to be.

And unlike the Avengers or JLA the Legion is off on its own isolated from the rest of the DCU, they rarely have to worry what's going in other books so characters could leave, come back and die permanently.

Which is why I gave up after the first Waid reboot. I caught up on the second Waid reboot in TPBs but never felt it. If you can hit reset any time then the stories just don't matter much to me. In theory I should be all over the Levitz reboot but again... reboots... ick.
January 9, 2013 at 8:52 AM

Twistyarm said…
All excellent points, Siskoid. And AFO boy is amazing. Some personal reasons why I love the Legion:

1. The 5 Years Later Era: The dark, overblown in angst 90's version of 'your favorite comic' that only the LSH could produce. So dense with references that only a fan could love it, so many character deaths and changes that few fans would. Yet it remains a complex saga of wit, drama, despair and hope.

2. Space Opera: The Legion has been doing it longer than Dr. Who (if that counts), with a format that really melds super-heroics with the genre. Plus, the LSH represents the diversity of their universe better than the casts of Trek or Wars. While staying Earth centered, they avoid being a 'homo-sapiens only club.'

3. I'm not a fan of the question "What super-power do you want?" as it ignores most comic book characters complex string of abilities. But the Legion explores this idea with a passion and focus that even the Fantastic Four doesn't match. Even Mon-El or Jo Nah seem like the classic response of "All of Superman's powers."

4. Another question: "Which super-hero world would you like to join?" Juvenile, but fun. As overwhelming as the 30th (31st now?) can be, it still has a sense of joy and wonder that other comic settings do not. All the potential of Trek's Federation, with all the adventure of the Justice League. This is a world of worlds to explore. All the main comic teams are great to read, but who would want to live as an X-man? (You would? Awesome. Let's team up the next time Kang and the Time Trapper get together.)
January 9, 2013 at 12:32 PM

Bob Buethe said…
Great post. I go back a little earlier than you -- my first Legion story was also Jim Shooter's, and I lost interest when Five Years Later began, though I came back on board for a while after Zero Hour. A big part of the Legion's appeal was that it wasn't just about characters, but a whole fantastic world to discover. For the same reason, I loved Superman stories set on Krypton or in Kandor.
January 9, 2013 at 2:58 PM

Austin Gorton said…
It seems there are two kinds of comics fans - those who love the Legion, you might say, unconditionally, and those who don't see the attraction whatsoever...

I think maybe I'm the odd duck that falls somewhere in the middle (though I definitely agree most people fall in one camp or the other).

I came late to the Legion, the first regular series I read being the Waid reboot. I thoroughly enjoyed it, but didn't follow the Legion to their next series. I've since gone back and read some of the greatest hits and fun, whacky Silver Age stuff, but haven't dove in headfirst.

So it isn't that I don't get the appeal of the Legion, and I have enjoyed what I've read, but at the same time, I wouldn't say I'm so enamored of it to become an expert.

There's something special about the geek cred one accumulates by becoming an expert on a truly immense fictional universe.

This I totally get. And maybe one of the reasons I haven't dove fully into the Legion is that, coming to it later than other comic book properties, I'm at a point in my life where I'm less willing to spend the time to master another fictional universe. But if I'd gotten into the Legion when I was a little younger, I'd probably have been all about it.
January 10, 2013 at 12:26 PM

Siskoid said…
Timing does tend to be a factor, I agree. When you don't feel you're getting in near enough the ground floor for the project to even be possible, for example.
January 10, 2013 at 5:18 PM

Anonymous said…
The biggest obstacle to getting into the Legion is availability of the good stuff, i.e. the Levitz/ Giffen run. I read The Great Darkness trade and found beat up copies of issues 297-300. They were good, but, as far as I know, there aren't huge Omnibuses of tose comics.

Are the Showcase reprints up to the late '70s yet? Honestly, Silver Age DC wackiness usually isn't my thing (great in small doses but wearying after about 3 issues), but I'd like to be able to read more prime Legion.