Nuclear Men of the Atom 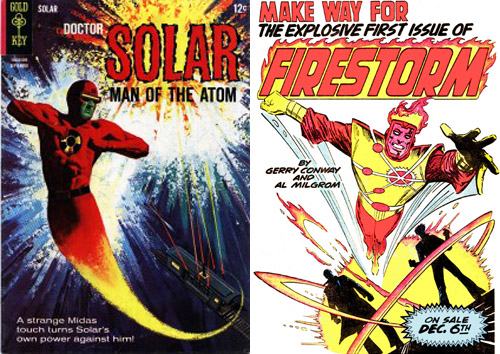 Firestorm, Captain Atom, Dr. Solar, Doc Manhattan... They walked into some atomic reactor, were completely destroyed, and then found their molecules coalescing again. Their new selves had great control of the molecular world, but had they kept their humanity?

Today we're looking at these Men of the Atom and what makes them resilient tropes in superhero comics. They're rarer than some other archetypes, of course, because their powers are off the charts (which is part of the problem of writing for them), but their origins really aren't. Marvel Comics in the 60s were especially keen on getting people and things into irradiated spaces. Spider-Man, the Hulk and the Fantastic Four (to name but a few) were all changed by radiation, that mystical science of the Cold War. But they didn't become Dr. Solar or Captain Atom. For that, radiation can't just change you. It must destroy you completely. When you are remade, it's by your own force of will. YOU create your new body. You've become a Quantum Archangel (to borrow a phrase from a Doctor Who novel).

And of course, there are gradations. Doc Manhattan is on one end, more god than man, cold and aloof, his understanding of the universe giving him a sense of a big picture that makes the rest of us somewhat insignificant. At the other end, we might put Firestorm, who though he has these amazing abilities, retains his kid-like personality. Perhaps there's a reason Firestorm is classically made up of two people (beyond the fusion theme). Maybe one needs to keep the other sane and grounded. Most Men of the Atom seem to fall in the former category however, as the most recent versions of Captain Atom and Dr. Solar have both been more compassionate versions of Manhattan, somehow still in touch with their humanity through their love of a woman.

Is that what draws us to these Nuclear Hyperions? The play between human emotion and cold logic that is at the heart of us all? Maybe we should think of them as reverse Hulks, where the Hyde figure is actually the calm, smart one. The Hulk paradigm seems to say our bad side is our emotional side, but these heroes tell a different story, that we should be afraid our of reason, not our emotions. In reality, either side can be used for good or evil. And that's perhaps where the more moderate Firestorm comes in. He too is a split personality, with the intellect in tow as a spirit guide and the body led mainly by emotion and instinct. Yet, neither are shown as negatives. Firestorm achieves a balance the others struggle to keep.

Now I want to hear from you. Why do you like Men of the Atom, or why don't you?
Archetypes Comics Theory

googum said…
I was thinking about Firestorm the other day, and how he really needed some kind of cap or Kryptonite or something. Like a 30-minute time limit or a life bar; something to keep him manageable. (That and a decent rogue's gallery, Firestorm's villains were the worst...)

Jeff R. said…
Firestorm's Rogues weren't bad in and of themselves, it's just that (excepting Typhoon) he's got Spider-man rogues that he's fighting with Galactus-scale powers.

And he does have a major limitation, that being that Ron Raymond is an idiot with no real idea how to use his powers to their full extent. And a minor one that stops him from affecting anything 'organic', which translates to 'alive or recently alive' for no particularly good reason. Which is why 'guy who's first move is to put a hemp noose around your neck before you see him' does make such a good villain for him...
February 25, 2013 at 5:55 PM

I'm partial to Atomic Skull on account that villains, I find at least, get the better part of the deal with the writers. They're just more fun.

Matthew Turnage said…
From this style of superhero, there have only been two I've really been interested in, and for different reasons.

I enjoyed the pre-Unity and Unity issues of Solar when Valiant had the licence (I've read some after that, but they didn't grab me as much). The appeal there, for me, was that the character was not only destroyed and recreated in the accident, but as a result of not fully understanding how powerful he was, he destroyed and recreated the entire universe. The psychological effect on the character, especially through the "Alpha and Omega" and "Second Death" storylines was fascinating. Plus, there was the unique situation of seeing someone trying to interfere with his own origin.

The other of these characters I like is Firestorm. There are a few reasons. First, the early issues flipped the Spider-Man dynamic where the dumb jock gets the powers, and is bullied at school by the smartest guy in class (Cliff Carmichael, IIRC?). Second, I love that he is actually two people, and taking the matter further, the one "driving" Firestorm is the younger, more impulsive, and less scientifically-minded of the two. The older, wiser, scientific genius can only passively observe and advise as Firestorm, which not only creates tension but also means that while Firestorm is powerful he's subject to making mistakes.

The problem with the Jason Rusch version of Firestorm was that it put the smart guy in charge, an error they repeated when the New 52 first launched by having Jason and Ronnie able to act as superbeings independently. They've since fixed it, but sadly too late.
February 25, 2013 at 6:14 PM

I can only take him a little bit at a time, because I've never been a huge fan of borderline omnipotent types. But as far as the character... pre costume is awesome. He was some green skinned scientist who had to shield himself from the world and his love interest in fear of killing everyone. But used those same powers to foil evil. And he wore sunglasses 24/7. C'mon! In the 60's, thats awesome! Even when he got that costume (again, awesome... welding goggles!) he was cool. His hair turned white (I guess from radiation or something) and the threats became more trippy. Doctor Solar for sure!

Firestorm not so much. I think it was the puffy sleeves that turned me off... and the matter manipulation was a bit too silly for me.

Siskoid said…
Jeff: Yes, Ronnie is pretty much Firestorm's kryptonite. I like that notion.

Matt: I liked the Dark Horse revival of Solar too, which had shades of this idea. Solar's creation having broken the universe, and his subsequent return in time back to his origin. And you make great points about Firestorm, his appeal, and how to limit his powers and keep him viable.

Buryak: Hey, the look of a hero can be important. Or else people wouldn't consistently harp on NuSuperman's.
February 26, 2013 at 9:59 AM

Matthew Turnage said…
Siskoid, I've thought about trying the Dark Horse Solar revival since Shooter wrote it too, but the FCBD preview didn't wow me. I've seen the first few issues in the dollar bin at my LCS, though, so I may check it out if it's similar to the Valiant treatment.
February 26, 2013 at 10:05 AM

Siskoid said…
Haven't reread my Valiant issues in years, but I thought it hit the same kind of notes, plus had a neat high concept about how superpowers were introduced into the world. Some high weirdness stuff I quite enjoyed.
February 26, 2013 at 10:15 AM