Who's the Golden Age Firebrand? 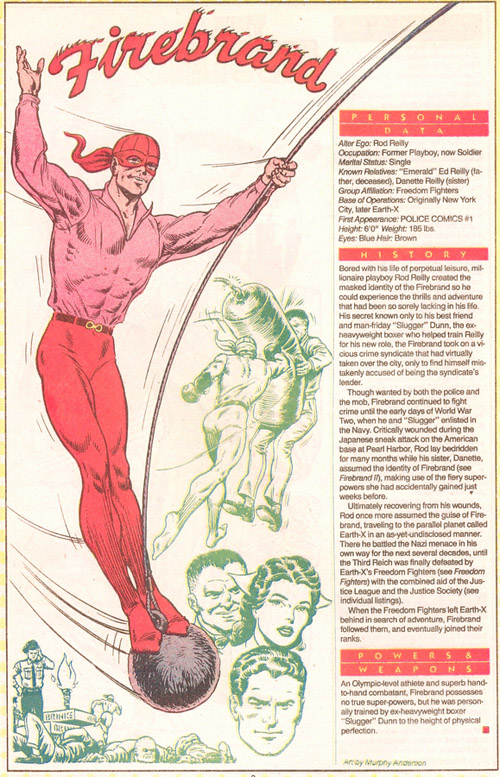 The facts: Firebrand, or I should say The Firebrand, is really Rod Reilly, a bored playboy who decided to live the dangerous life of a vigilante to chase away the doldrums. Trained to perfection by his friend, retired boxer "Slugger" Dunn, he fought the good fight, usually while on the run from the cops, through the first 13 issues of Quality Comics' Police Comics (so from 1941 to '42). He had the cover for the first four before Plastic Man took it over, and the top story of every issue for a bit longer. Then, media blackout until the late 70s when he was occasionally used in Freedom Fighters, showing up in All-Star Squadron #1 after having joined the Navy. He gets badly hurt at Pearl Harbor and his sister Danette finds his costume and becomes the new and all-different Firebrand, one of the main characters of that book, while Rod eventually puts in a few appearances as well.
How you could have heard of him: The name has certainly seen a lot of use, from the Ghost Rider-esque 90s hero (Alex Sanchez) to whoever that guy was in the 2000s' version of the Freedom Fighters (Andre Twist). Rod, however, hasn't really appeared since ASM. An unpublished issue of Freedom Fighters would have had him killed by Silver Ghost.
Example story: Police Comics #5 (December 1941) by his creator Reed Crandall 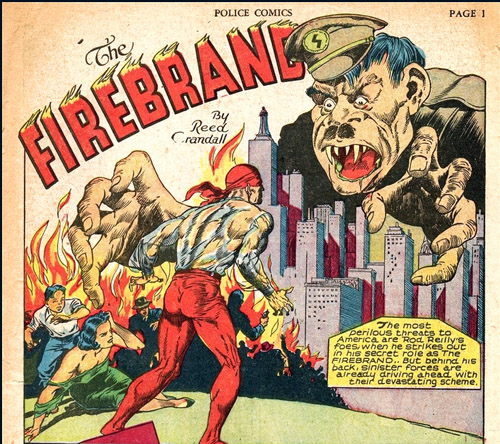 The Firebrand is character who's all about having fun while fighting crime and Crandall really nails that concept. The action is a lot of fun in these stories! And great art from the man who was responsible for a lot of the Quality heroes too, including his most popular strip, Blackhawk. It looks like the colorist never really knew what to do about that transparent shirt though. Issue 5's title-less story shows Rod as a an insouciant daredevil, never more happy than when he's risking his neck. He's got a stake in this story beyond relieving boredom, mind you. Fifth column saboteurs have been attacking American factories and killing workers and more or less blaming the Firebrand for those crimes. Then, his girlfriend's friend is kidnapped (the saboteurs are working out of Madge's estate), so he goes undercover as himself, his beloved Joan Rogers in tow, and gets himself knocked out and her kidnapped. Don't know where he hides the pink gauze shirt, but left for dead, he goes into action as the Firebrand, infiltrating the castle (no joke) Madge seems to live in with her father, and finds nefarious foreign agents who look a little like Hitler and Hirohito. Well, when you're in a Medieval castle near New York, you have to use what the good Lord gives you.

As he gets closer to the kidnap victims, he has to fight a number of armed goons, one of which falls onto his own knife. Yeah, "falls". He rescues Joan, Madge and her father, helping them climb down the castle ramparts, then runs for the bad guys who are trying to escape on their gunship. Well, there's no way he's going to let them! 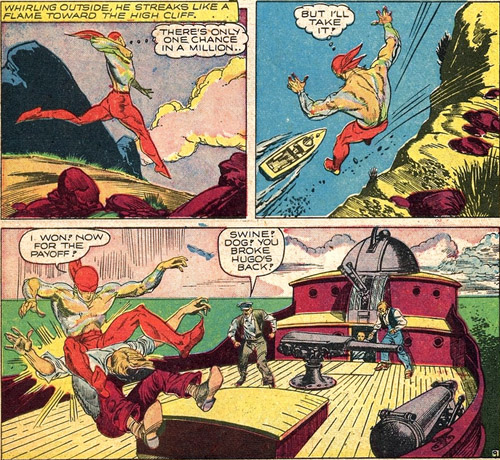 Buckle my swashes, that is some amazing superhero action! Sorry. Mystery man action. HE BREAKS A GUY'S BACK! A few punches later (and Firebrand takes a boat hook to the head) and he's pulled out his trademark/calling card and means to make them surrender. 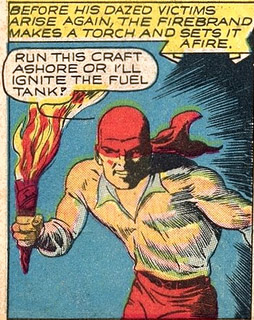 And they do. You betcha they do. When they reach the shore, he changes back into Rod Reilly, millionaire playboy and not at all Bruce Wayne's lookalike, so Joan won't suspect his true identity. The cops take the saboteurs into custody and are told the Firebrand apprehended him, so... That fixes his reputation, right? 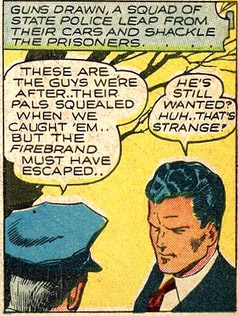 Nope. There's no changing the status quo this early! (Or possibly, ever.)

I know Firebrand isn't quite as obscure as some of the other characters I've featured in Who's This?, but all those late 70s-early 80s appearances never really got to the heart of who he was as a solo character. Even on the Freedom Fighters, he was kind of a reserve member, only a notch above the Red Bee. You never thought of him when you thought of the FF. Uncle Sam, Doll Man, the Ray, Black Condor, Human Bomb, sometimes Phantom Lady. But never Firebrand. So I really really wanted to see what he was like in the Golden Age, and in large part thanks to Crandall's art, I have to say I fell in love with the character. I'd read a Firebrand book today if it could capture the same dashing vibe, I really would.

Who else? I have half a mind to do Firefly, but I think there's wayyyyy more obscure in Who's Who volume 8. In fact, it features two Forgotten teams. I bet I could do something with that.
Comics Golden Age Who's This?

Anonymous said…
I thought Firebrand was a lady. When was he operated?

Garnet said…
And you're probably thinking of her because she was awfully pretty, as rendered by Jerry Ordway. Guy deserves work, DC!
March 12, 2013 at 12:22 PM

Anonymous said…
Reed crandall was awesome. Did you get the images from a reprint book?

Siskoid said…
Sadly, these were never reprinted. I confess to downloading the issue to do my research and panelcaps. I would be totally up for a Crandall reprint book of such features as Firebrand, but I'm not holding my breath.
March 12, 2013 at 4:09 PM

American Hawkman said…
For the record, it was Danette who was implied dead at the hands of the Dragon King in Stars and STRIPE rather than Rod. Rod's "death" at Silver Ghost's hands was just being turned to silver as well... imminently survivable in a superhero universe.

Not that it's strictly on topic or anything, but I always thought it was interesting that Firebrand's sister was a stand-in for a REAL obscure heroine, the Golden Age Wildfire, who DC prohibited Roy Thomas from using in All-Star Squadron because a Legion of Superheroes member had the codename. Roy copied her background and personality for Danette perfectly, yet the original has appeared in a few Golden Age one-shots in crowd scenes. Figured any of you that hadn't heard that, yet liked this thread would find that interesting.
March 12, 2013 at 7:24 PM

Siskoid said…
That is an awesome detail! And Wildfire was a Quality hero, just like Firebrand too.

Wiki says: Carol Vance was orphaned by a huge forest fire but was rescued by a god of fire who imbued her with his power to create and control flame. Adopted by the wealthy John Martin and his family, the teenage superheroine uses her powers to combat criminals, saboteurs, and supernatural menaces.
March 12, 2013 at 7:55 PM