May 28, 2013
In the spirit of each successive season seen as a Doctor Who RPG campaign, Lalla and John have surrendered their character sheets before leaving. 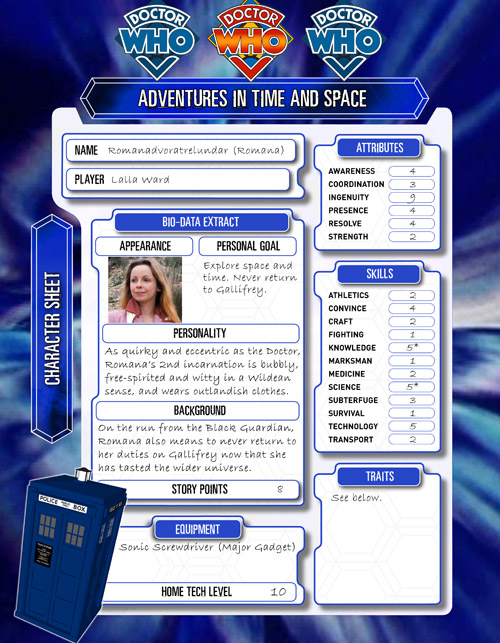 Starting with Lalla, stuff that didn't fit on the sheet, kept on the back...

BAD TRAITS
Argumentative (Minor)
Distinctive (Minor): In Romana's case, it's all about the clothes. Her player took delight in assembling her eclectic wardrobe for every story.
Eccentric (Minor): Romana has all sorts of mannerisms humans might consider alien, rarely showing the proper emotion to fit any given situation.

FAVORITE METHOD FOR ACCUMULATING STORY POINTS
Removing Brave from her Traits list in favor of Screamer!, Romana manifested a certain "wetness" that made her crumble with terror where her predecessor might have shown jaded aloofness. She chose her moments for maximum Story Point hoarding. 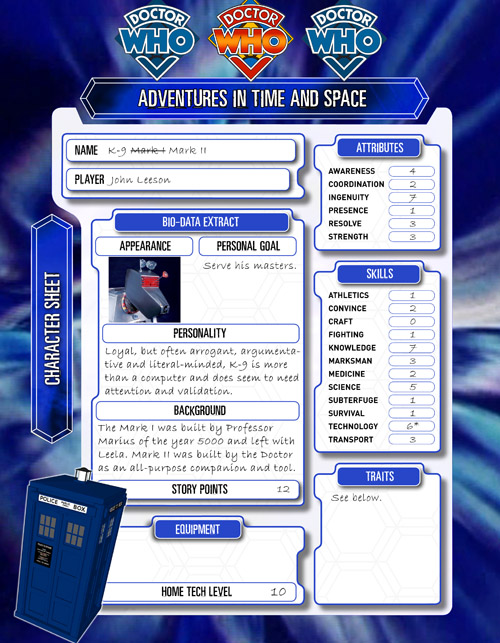 SKILLS
*K-9 has a +2 Technology Expertise in Computers.

BAD TRAITS
Argumentative (Minor)
Clumsy (Minor)
Distinctive (Minor)
Obligation (Major): To his masters.
Slow (Minor)
Weakness/Low battery (Minor): When K-9 rolls double "1"s on any roll of a physical nature (like using his nose laser or rolling down a hill), his batteries run low. Unless he finds a power source (the TARDIS will do), his physical Attributes and Skills will all drop to 1, and further drop to 0 if he make another roll of a physical nature above Average difficulty.
Weakness/Noisy motor (Minor): K-9 is -2 to Subterfuge rolls if he has to move as part of his action.
Weakness/No limbs (Major): K-9 cannot pick up things (no hands or arms), nor can he climb stairs (no legs).

FAVORITE METHOD FOR ACCUMULATING STORY POINTS
Malfunction, malfunction, malfunction. K9 could easily amass the Story Points necessary to boost all his Awareness and Knowledge rolls by letting his battery run down, drive into some danger that scrambles his circuits, etc.
Doctor Who RPGs Seasons of DWAITAS