May 10, 2013
All the hits from Flash Comics #44 (1943), "The Demented Dictator", a story that begins with Goebbels showing Hitler his new propaganda film, but something's not right. The Fuhrer is portrayed as an ape pitchforked by peasants! 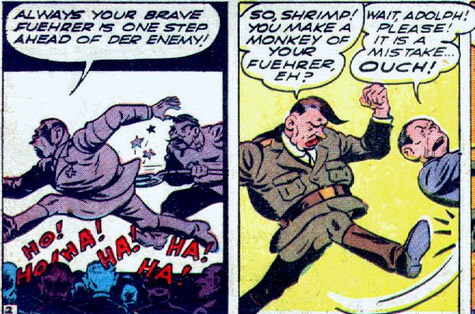 Yep, it's a good old-fashioned haunting in which the Ghost Patrol (Who's This?) have made their OWN movie and switched it for Goebbels to foment dissent in the Nazi camp. The bad guys race up to the projection room and get a taste of some spectral FISTS!

But the Ghost Patrol is vulnerable when it's solid enough to pound on Ratzis even, apparently, when they're just disembodied heads! Nightmare fuel!

Pedro's head soon wakes up, butts a Nazi coroner in the stomach and rescues his friends. Now to sink Hitler's new, extra-rangey battleship! Or at least disrupt its christening. 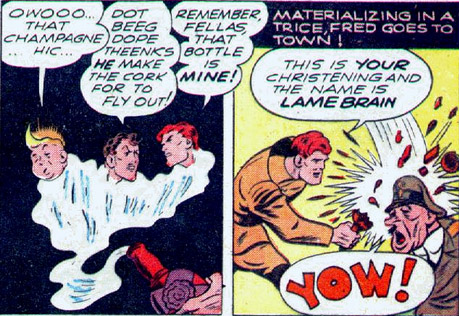 The Patrol drown the German soldiers in thick beer and steal Adolf's dentures! "All mein beauty ish gone!" he cries. And so is his capacity to make himself understood as speech impediment is layered over his thick cartoon accent. THEN they sink the boat. But it's not over. One last bit of humiliation for the road: 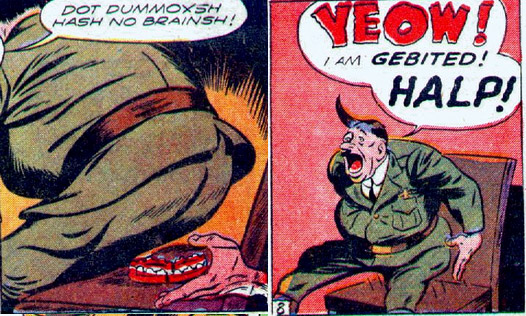 SallyP said…
Humiliating Hitler is just one of those things that is irresistable.
May 10, 2013 at 4:41 PM