Who Are the Ghost Patrol? 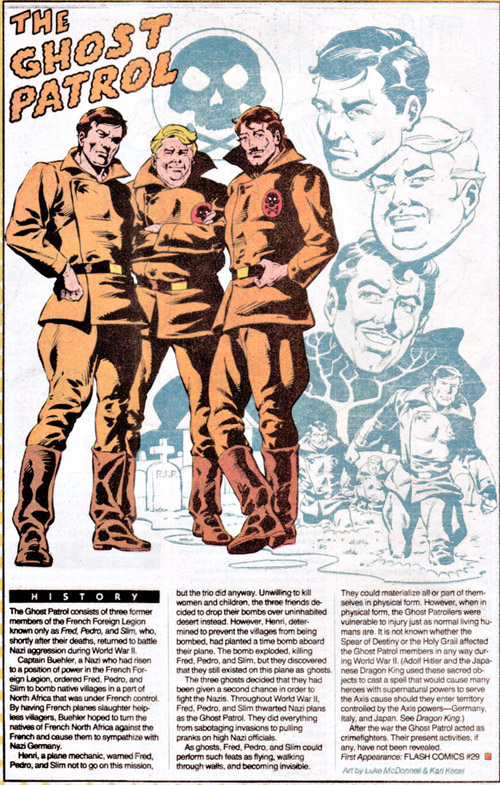 The facts: Fred, Pedro and Slim were in the French Foreign Legion (North Africa) when WWII broke out. Killed before they could be tricked by a Nazi to commit heinous war crimes, they remain on Earth as ghosts, ghosts intent on haunting the Axis! Though largely ignored today except as a visual joke (see below), the Ghost Patrol was a pretty steady feature of Flash Comics from their first appearance in 1942's #29, appearing in 73 issues of the series, right on up to the last issue of the series (#104) in 1949. They also appeared in three issues of Comic Cavalcade and in the Big All-American Comics Book 1944). Most stories were written and drawn by Ted Udall, who worked on various Golden Age DC heroes, like the Atom, Red, White and Blue, Sniper and Mr. Terrific, and was Sheldon Mayer's assistant editor.
How you could have heard of them: They're often seen sitting and drinking in the background at the Oblivion Bar, a setting used in the Shadowpact comics (among other places).
Example story: Comic Cavalcade #1 (1943), "Hitler Is a Bum!" 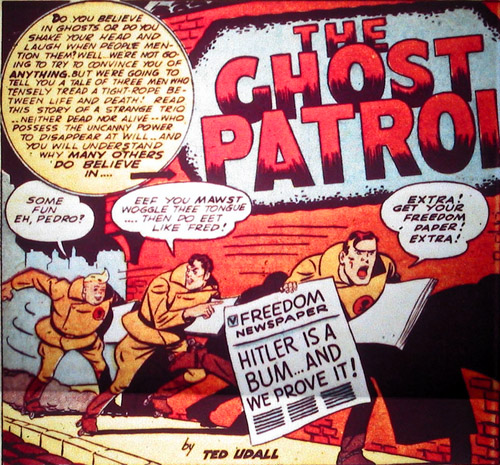 You all know how much of a fan I am of Hitler-punching-and-humiliating. How could I resist this story? That "freedom newspaper" Fred is holding? Guess who its delivered to. THIS GUY: 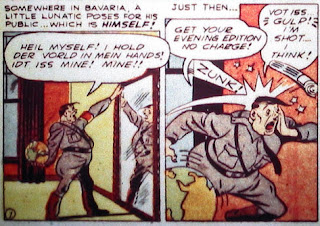 The Fuhrer is such an ass, he deserves this. You know he does. I have to say though, as far as ghosts go, the Patrol are a pretty physical bunch. In fact, when they're solid, they can be knocked upside the head, or be kept from dematerializing with a bit of laughing gas. And that's exactly what happens to Pedro, whose accent is an outrageous (but realistic) mix of French and Spanish (maybe he's Basque?) - speaking of which, I didn't know the French Foreign Legion was full of other nationalities, but it's true! Anyway, what I'm getting at is: Good luck understanding everything in an interrogation scene between Pedro and Adolf. 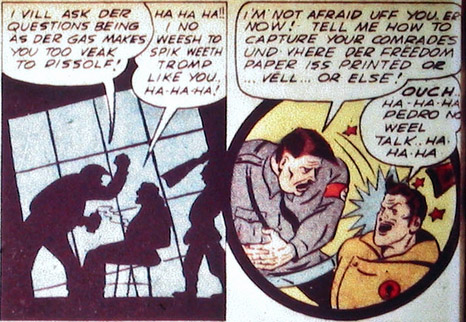 Pedro is soon rescued by his friends who haunt... with their fists! 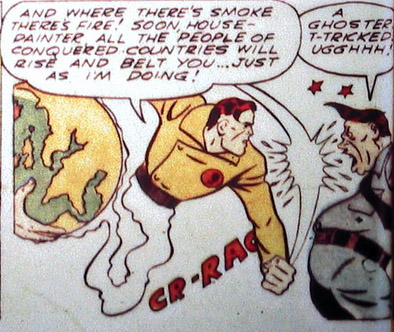 Oh one more for the road, Fred, thanks. 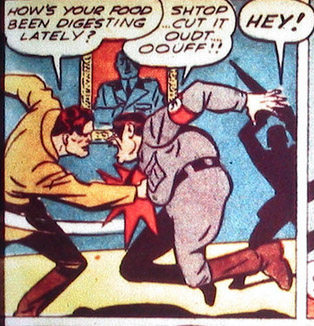 Ahhh, that hits the spot. Now, the newspaper wasn't just a gag. There's an actual underground freedom press in the area who put that thing together and now must move on to another town to spread the news. The Ghost Patrol agree to stall the Ratzis while the freedom truck makes its getaway. What better distraction than more Hitler humiliation? They grab him from his balcony and fly him to the roof - and the megalomaniac initially thinks he's become so powerful he can soar - and give him a round beating. 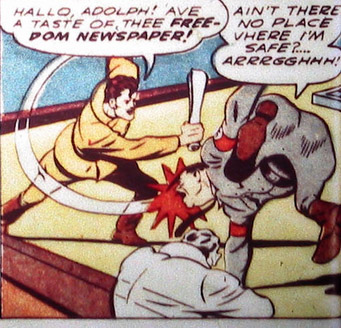 They rip his pants off, put a paper hat on his head, spin him round a few times, and send him to see his troops. When they see this fool, they hope to get a commendation from the Fuhrer by doing sadistic things.

Ooops! They realize their mistake and he sends them off to bomb the freedom truck post-schnell. Of course, the Ghost Patrol has already taken to the skies in a plane and as is their habit, they cause of nifty accident while they pop off to Limbo.

The freedom truck escapes and we win the war. Eventually.

As you can see, these adventures don't take themselves too seriously. The Ghost Patrol's stories are full of these kinds of shenanigans, generally scaring wicked German and (sometimes) Japanese soldiers and leaders and causing accidents that save Ally lives. This isn't even the only time they've haunted Herr Hitler! Few of these stories have been reprinted, though the Archives series is starting to (Comic Cavalcade Archives, for example). Simple and fun propaganda comics worth checking out!

Who else? Might have gone for the Ghost, but the Charlton villain eventually made a DC appearance against his old/new foe Captain Atom. He WAS completely unknown when he appeared in Who's Who though. Likewise, the Global Guardians' appearances in Justice League books within a couple years makes me skip over them. But has anyone ever read a solo Golden Gladiator story? Me neither.
Comics Golden Age Who's This?

Bob said…
Way back in 1978, I met DC trivia guru E. Nelson Bridwell, and almost stumped him by asking him to name the members of the Ghost Patrol. It took him a couple of minutes, but he did remember them.
May 7, 2013 at 11:55 AM

d said…
The French Foreign Legion are foreign nationals serving in the French military. Ted Udall knew his stuff!
May 7, 2013 at 12:24 PM

Unknown said…
So are you taking requests or what? I think the Grim Ghost or maybe G.I. Robot is probably better than the Golden Gladiator
May 11, 2013 at 5:08 PM