Who Are the Green Team?

May 01, 2013
Who's This? The guys at the Who's Who Podcast aren't ready to attack Vol.VIII yet, the "G" issue, so I decided to talk about characters who DON'T appear in that issue, and YET they're about to get a series in the New52! The Green Team, rich kids whose closest shot at a Who's Who page was Ambush Bug #3 (oh, the wrongs that issue redressed!). 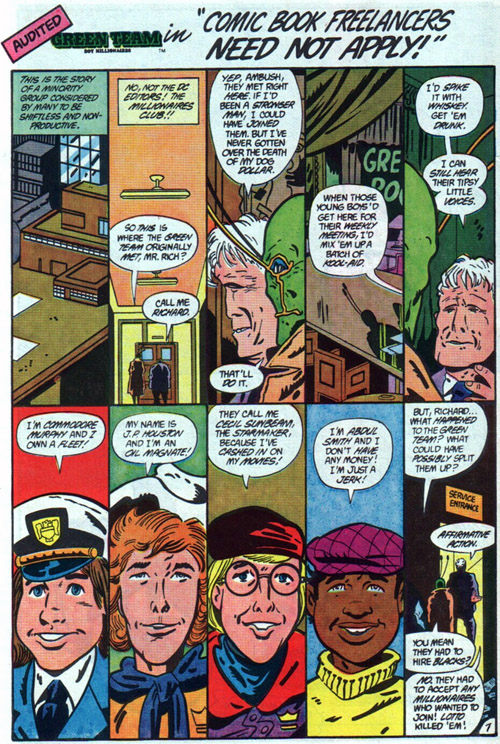 The facts: The Green Team: Boy Millionaires first appeared in 1st Issue Special #2 (1975), a series which acted as "pilots" for new ongoings, one of Joe Simon's "comedy" ideas, as drawn by Jerry Grandenetti. DC seemed to have an actual interest in producing more since a few more stories were written and drawn, but the implosion that rocked the company meant they were never published, except in-house in the infamous Cancelled Comic Cavalcade. Basically, it was Richie Rich as filtered through Jack Kirby's "kid gang" comics.
How you could have heard of them: If you follow comics news, then you know this month will see the release of two "politically charged" books, including the Green Team: TEEN Millionaires (they've grown older) by Baltazar, Franco and Ig Guara. Before that, you might have scratched your head at Adventures of Superman #549 (1997) in which the Green Team and another forgotten kid gang, the Dingbats, teamed up with the Newsboy Legion. Otherwise, it's just amusing cameos in Animal Man's limbo and a couple of Ambush Bug issues.
Example story: 1st Issue Special #2 (1975) 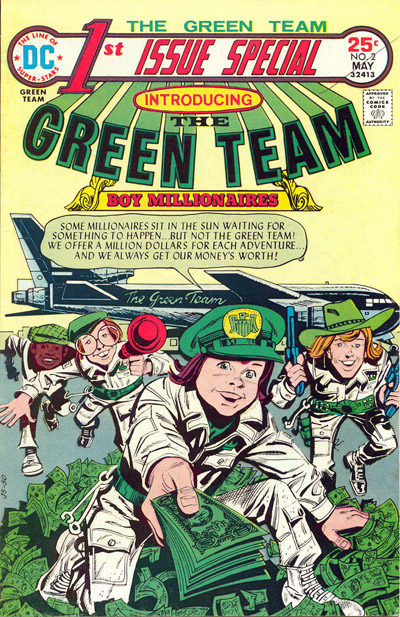 The Green Team is an exclusive adventurer boys' club that has a single prerequisite for joining - that the prospective member have a million dollars in the bank. They need the dough to finance their adventures or any cool (and dangerous) project they might come across. But how DO young boys make the required fortune?

Commodore Murphy - Boy shipping magnate: Inherited the world's biggest fleet of oil tankers, and is now buying up land like the distinctly unOregon-like Rockmuch, Oregon, in the heart of the desert. 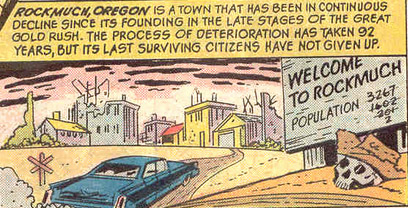 Murphy blows up the town and builds an airport in two days. Now he can sell land in the Oregon Desert because it's become a "central" location for air traffic.

J.P. Huston - Texan oil tycoon: His dad's still alive, but I guess he shares the business with his son, although J.P. is more interested in adventure than business. 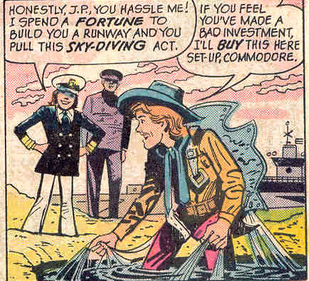 Cecil Sunbeam - The Hollywood film director they call "The Starmaker": He built his family's failing studio into a million-dollar success. How? By doing THIS in his adaptation of Shakespeare's The Merchant of Venice.

Abdul Smith - African-American shoeshine boy: The issue's subplot shows how the bank makes an error on Abdul's account balance, turning 5$ into 500,000$, which allows him to accidentally bet it all on the stock market, tripling his money before the bank corrects the error and takes back its initial 500K.

Abdul gets to live his dream of being in a private club. But what do these millionaire kids do? Well, for starters, they don't skimp on the travel expenses. May I remind you that Murphy and Huston were TOGETHER before they headed off to their meeting on the East Coast? 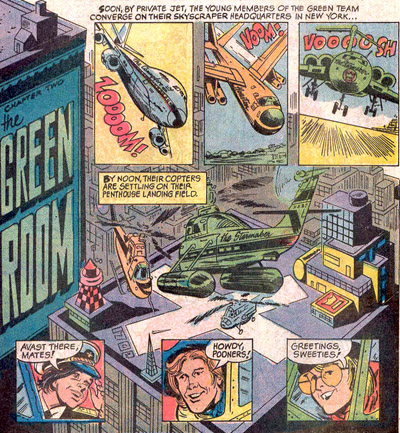 Three different jets, then three different helicopters. Abdul took the stairs. The MAIN plot has the Team finance Professor Apple's Ipad Great American Pleasure Machine, a pleasure dome that will replace TV, movies and theater by bombarding people's minds with thrills for weeks at a time. What? Replace traditional entertainment with some digitized facsimile? Time for the 99% to have their say!

Marching bands and carnies are NOT about to go down without a fight! Even the superheroes are pissed.

Led by carnival barker D. Meritt, the protesters make it impossible for the Team to complete work on the Pleasure Machine, so they hire a private army to protect their property. These guys were ahead of their time, weren't they? Oh, and they get cool uniforms. Because overalls are the ultimate richpster status symbol. 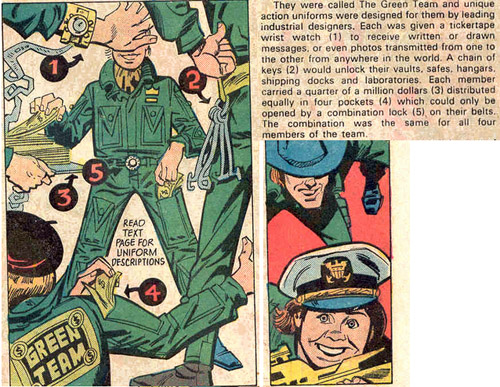 The solution is simple, really. Throw money at the problem.

But D. Meritt won't be deterred. He jumps into the completed Pleasure Machine, intending to blow it up after he, and he alone, experiences the ultimate entertainment, for a week, but it's a little more trippy than expected. 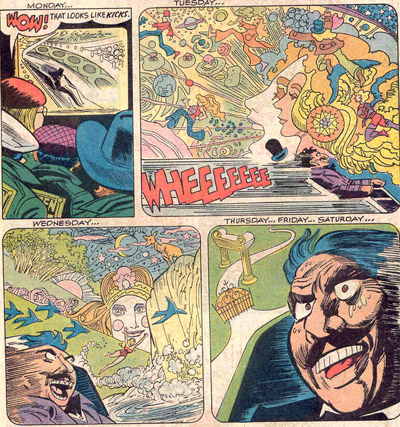 It drives him insane. So what are the boys going to do with their wasted investment? Only one thing TO do, really, and that's have fun blowing it up!

Is it me, or is the satire a lot more obvious and biting today than it could ever possibly have been in 1975?

Who else? Who's This will return to its regularly scheduled Who's Who entries in the next installment.
Comics Who's This?

Andrew said…
Oregon may enjoy the reputation of an emerald wonderland, but that's really just the Cascades and points west. East of the mountains, things get dry enough in the south to be called the High Desert (which, in the interest of fairness, is more of a steppe).
May 2, 2013 at 3:10 AM

Note that the only time I've ever seen my province in a superhero comic, they made it look like the Rockies.
May 2, 2013 at 7:47 AM

Randal said…
That's ridiculous. Everyone knows all of Canada looks like Seacouver.
May 2, 2013 at 6:15 PM

Siskoid said…
My friend Kal knows what he's talking about.