Who's the Golden Gladiator? 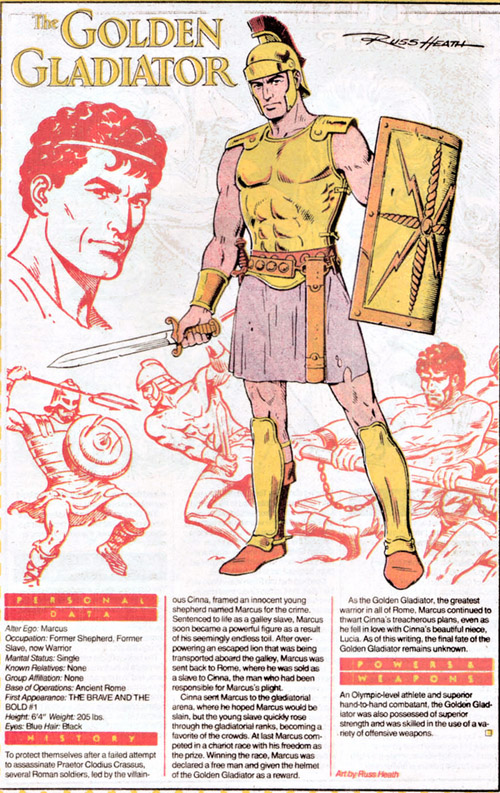 The facts: The feature (and at first even LEAD feature in five of the first six issues of The Brave and the Bold, Marcus went from shepherd to slave to star gladiator in his first 8-page appearance, setting up four more stories of the same length way back in 1955-56, written by France Herron (co-creator of Captain Marvel Jr., Cave Carson and the Red Skull, among others) and drawn by the excellent Russ Heath. He then wouldn't be seen again until the Crisis when he appeared next to other historical heroes in All-Star Squadron, actually published AFTER his Who's Who entry. A few of the stories were reprinted in the late 80s in the Best of B&B.
How you could have heard of him: He was whisked to Dinosaur Island with warriors of other eras in 2008's underwhelming The War That Time Forgot limited series. More recently, he was featured in a chapter of Walt Simonson's The Judas Coin.
Example story: The Brave and the Bold vol.1 #2 (1955), reprinted in The Best of the Brave and the Bold #3 (1988) 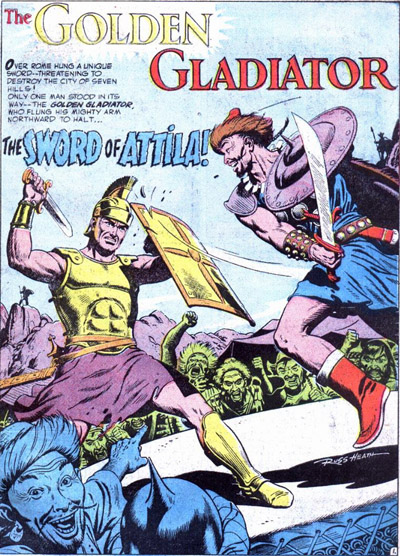 DC's sole Roman hero is perhaps dubiously good at what he does. With apparently no previous training, this lowly shepherd got into the arena and beat every opponent (bloodlessly!), bested every beast, and won every crooked chariot race thrown at him. That's how you get the "Golden Gladiator" title and armor, and the Emperor's favor. Aside from that unnamed Emperor, Marcus has two key supporting cast members: 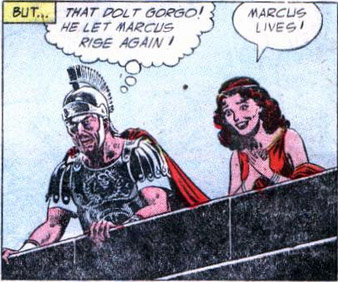 And as you can see, they've got differing attitudes. Cinna is his owner and the man who falsely condemned him to this life to cover his own treacherous ass. His role is to order Marcus to his death over and over again so that his secret dies with him, and subtly too because he's the Emperor's favorite. As you might guess, his plans are consistently foiled. The prettier one is Lucia, Cinna's niece and Marcus' girlfriend. She doesn't know her uncle is a would-be murderer and she uses his season tickets all the time. All caught up? So on this particular occasion, after Cinna's newest champion completely fails to defeat Marcus in the arena and there's feasting and stuff, a messenger shows up to tell of the Emperor about Attila the Hun's approach. Cinna quickly offers the services of the Golden Gladiator to go into the Hun camp and steal Attila's sword. The superstitious hordes will surely have their spirit broken after that! Also, nice suicide mission. Marcus offers to go alone, and is kinda emo about the fact Lucia didn't come to kiss him goodbye. But soon... 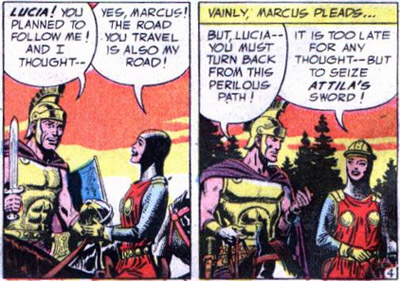 Why Lucia should be wearing bawdy Medieval armor remains a mystery, but she's clearly a woman who stands by her man and not afraid of a little action. But tangling with the Huns isn't what you call "little action". Not when they start catapulting fireballs at the party of two! But I don't think the Huns know they're facing the Golden Gladiator here! 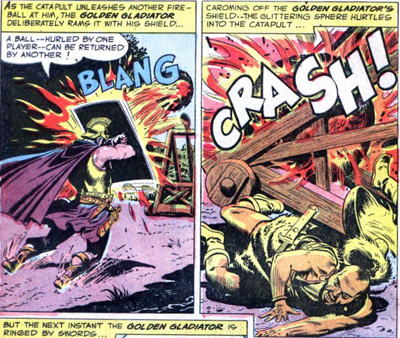 Pretty much every story has the Gladiator execute some feat of incredible strength or agility like this, like pole-vaulting to a ship a hundred feet away, or stopping a chariot with his bare hands. In this case, it's awesome, but it doesn't stop the Huns from surrounding him with weapons. Thankfully, Lucia gets away. Though manacled, Marcus still challenges Attila back at camp by jumping on this giant war drum. Barbarian swords are no match for a well-trained, armored Roman! 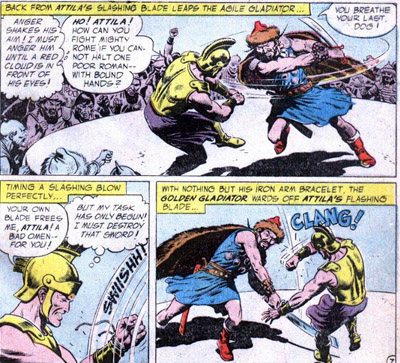 See? Marcus even breaks Attila's sword, takes it from him and... where to go when you're surrounded? How about your lady's saddle?

They ride off. The Huns never attack. Rome is in their debt. Cinna's plans have been foiled again. And Marcus gets a little somethin-somethin, if you know what I mean. 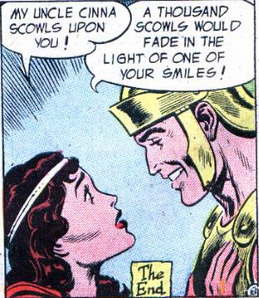 He's not just a warrior, he's a lover.

Not that there's much commitment to non-superhero, especially historical, fare at DC these days (or perhaps I should say, on the part of DC's readers), but with the success of movies like Gladiator, and television shows like Rome and Spartacus, wouldn't it have made sense to at least try to tap into the Roman Empire's pop culture allure in the 2000s? Maybe the next "Sword of Sorcery"-type series will feature the swordsmen that first appeared in those early issues of The Brave and the Bold - Golden Gladiator, Viking Prince, and Silent Knight. They could do worse.

Who else? The Grim Ghost is next. He has to be.
Comics Silver Age Who's This?

Anonymous said…
"The superstitious hordes will surely have their spirit broken after that!"

Attila was said to wield the Sword of Mars, as in a magical artifact; I don't know how superstitious the Huns were, but losing the sword would certainly be a symbolic loss to Attila. (No doubt Attila wouldn't have attributed it to Mars but rather to whatever warrior deity he knew, but it's not like the Roman historians were super-concerned about that.)

So, do the geographical oddities of the DC Univese stem from this single moment in history? With Attila falling out of Mars's favor, the balance of power between Romans / Franks / Huns changed, the Hunnic Empire fell apart more quickly, which somehow led to the founding of Gotham City, Metropolis, Coast City, and so on?
May 15, 2013 at 9:03 AM

Siskoid said…
That's an interesting notion, though I rather suspect difference crop up much earlier, at the caveman stage (Anthro, Kong, Vandal Savage), if we're blaming a butterfly effect.

My response to the story was that G.G. merely delayed Attila's advance. The sword breaks far too easily on one of his bracers, which leads me to suspect it wasn't the Sword of Mars, but his "days of the week" blade.
May 15, 2013 at 9:15 AM

Unknown said…
So it turns out I had confused the Golden Gladiator with Son of Vulcan. I'm actually pretty embarrassed by that, and also by the fact that I care about that.

American Hawkman said…
Yeah, Viking Prince is definitely better. Honestly, I wouldn't even be expecting Silent Knight for this feature, in between his statuses as a Past Life for Hawkman and an adopted ancestor of Superman.
May 15, 2013 at 8:58 PM

Siskoid said…
Ultimately, I'd love to cover EVERY Who's Who entry, no matter how well-known, but AmHawk's right, the Silent Knight isn't a high priority for the reasons he listed.

You never know though. Sometimes I just want to see what the original stories were like regardless of a character's place in the current DCU.
May 15, 2013 at 9:08 PM

Nuno Duarte said…
An interesting tidbit: since there's no real equivalence to the word "Booster" in Portuguese, "Booster Gold" has been dubbed "Golden Gladiator" for decades in the Portuguese translated DC Comics books :)
May 16, 2013 at 3:18 PM