The Fourth Doctor: The Character Sheet

June 05, 2013
In the spirit of each successive season seen as a Doctor Who RPG campaign, Tom has relinquished his character sheet before leaving. 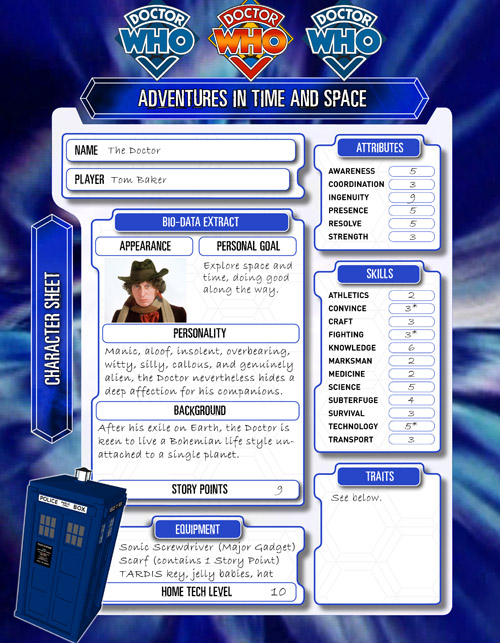 SKILLS
*The Doctor has a +2 Convince Expertise in Fast Talk, a +2 Fighting Expertise in Swordfighting, and a +3 Technology Doctorate in Computers.

BAD TRAITS
Argumentative (Minor) - The Doctor doesn't like to lose an argument and will often respond to contrary points of view with childishness, rude shushing, or pretending the contrary opinion was his own all along.
Code of Conduct (Minor) - No killing
Distinctive (Minor)
Eccentric (Major) - The Doctor exhibits all sorts of mannerisms humans might consider alien, rarely showing the proper emotion to fit any given situation.
Impulsive (Minor)
Insatiable Curiosity (Minor)
Random Regenerator (Major)

SPECIAL TRAITS
Bio-Rhythmic Control
Bottom of the Class - The Doctor suffers a +3 Difficulty when dealing with other Time Lords socially and a +2 Difficulty on all TARDIS and Temporal science rolls.
Feel the Turn of the Universe
High Office - President of Gallifrey
Time Lord
Time Lord (Experienced)
Vortex

FAVORITE METHOD FOR ACCUMULATING STORY POINTS
The Doctor lets his arrogance and superiority complex get the better of him. His Impulsive Trait is key, forcing him to jump to conclusions before all the facts are known, in effect making him jump from the frying pan into the fire. He also likes to do things for the sake of a joke, hoping the GM will reward his wit with Story Points, especially in cases where the joke replaces a useful action that could get him out of a jam, though mileage has varied across the GMs who have run his games.

Siskoid said…
Erased this baby by mistake, and reposted it, so here are the comments that were already on there:

Zundian said:
I love that the scarf contains a story point

And I answered:
I love that the scarf contains a story point.