Who Are the Heroes of Lallor? 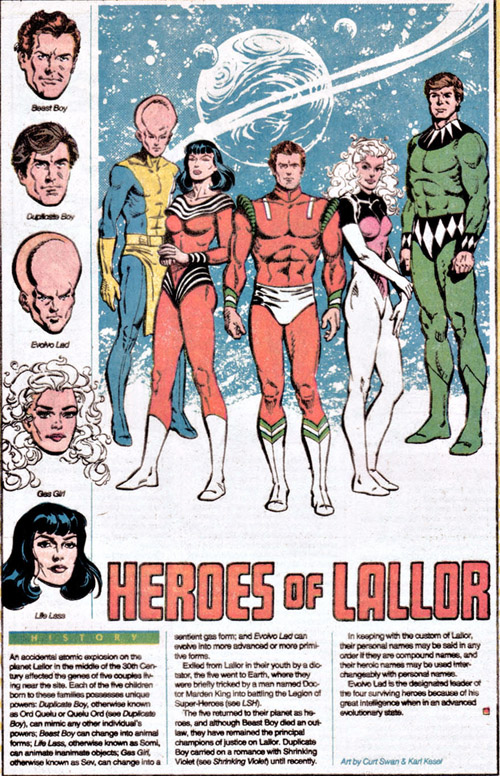 The facts: The 30th-century Heroes of Lallor first appeared in Adventure Comics #324 (1964) and aside from a story in which Beast Boy died (Adventure #339) and a smattering of appearances for Duplicate Boy as Shrinking Violet's boyfriend, they've been pretty much relegated to the role of cameos in group shots at fancy functions (like Legion marriages) or in the background in the more epic fights (like the Great Darkness Saga). Their origin tale was reprinted in Batman #238 (1972).
How you could have heard of them: All members did wind up appearing in the 5YL era (five years later). Life Lass as a member of the United Planets militia, and then Lallor fell to the Khunds. Apparently under Khund control, the Heroes appeared in Legion of Super-Heroes vol.4 #48, and #57-58. Post-Zero Hour, a few of them showed up in Legionnaires #49 (Beast Boy and Gas Girl, with the former Arm-Fall-Off Boy, Splitter), while Evolvo-Lad was in another team called Workforce. The Threeboot Legion books made use of Lallor, but only Evolvo-Lad was ever seen, as Brainiac 5's ally, in LSH vol.5 #31 and 36.
Example story: Adventure Comics #324, "The Legion of Super-Outlaws" (Sept.1964) by SF writer Edmund Hamilton and artist John Forte 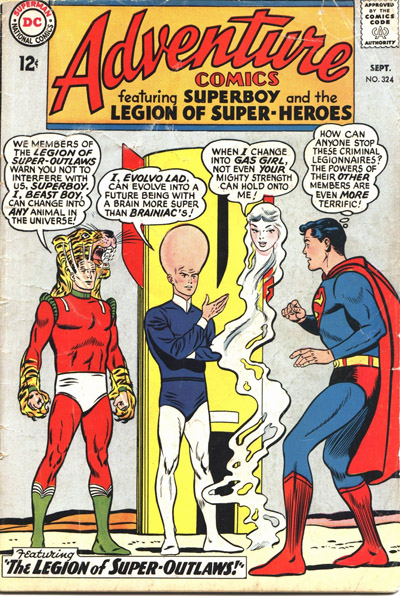 It's their first story, and the only one to actually focus on the team. Where else am I gonna go?

The story really starts with the brother of Legion reject Jungle King (from Adventure Comics #309)  who went bad, renamed himself Monster Master and went up against the Legion with his mind-controlled alien animals, until one of them ate him(!). 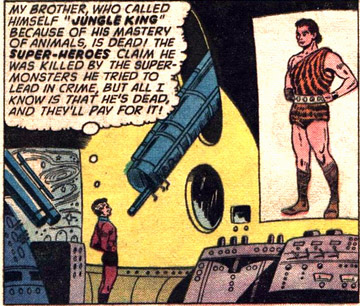 His really really really older brother, Dr. Marden King, is now looking for convoluted Silver Age revenge. He finds his chance in the distant planet Lallor which he's been observing for years (don't worry, the laws of physics have changed by the 30th century). Lallor had a nuclear accident years ago that produced five infants with super-powers. Here are their powers in action (including Evolvo-Lad's rarely seen devolved red ape form), courtesy of Duplicate Boy's ability to copy any power:

The last piece of the puzzle for King is the crooked prime minister who, fearing the Heroes of Lallor would upset his dictatorial reign, exiles them in space aboard an experimental starship (and here I though WE spent too much on prisons). Dr. King uses his dimensional-stereo to attract the Heroes to Earth.

And when they land, he slanders the Legion of Super-Heroes (or just "the Super-Heroes" as they're often alternately called in this era): 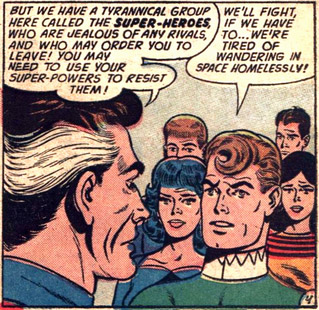 Then he alerts the Legion to the "Super-Outlaws" that have just landed to conquer Earth! Starboy, Invisible Kid, Shrinking Violet and Superboy are the only ones on hand to react and the latter makes sure to tell his three friends they probably shouldn't go on the mission on account of their lame powers, but he can't shake them off. Evolvo-Lad comes to the same conclusion Kal-El does: 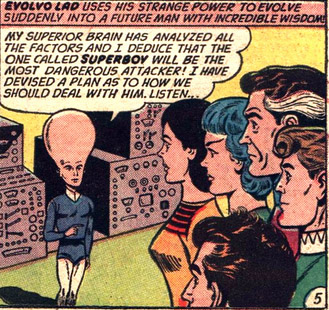 This guy's real power is Super-Obviousness, I think. As soon as Superboy arrives, Redundant Lad copies his powers and throws him into a kryptonite cage, leaving the other Legionnaires to get trounced by the other Lallorians. Gas Girl vs. Starboy: 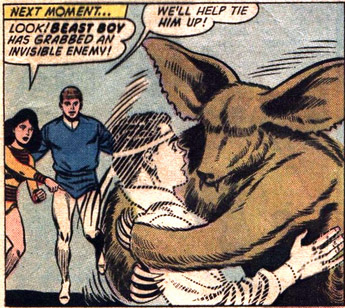 That's when Violet bolts and hides in a weasel warren where only Duplicate Boy can follow. For a "super-outlaw", he's pretty quick to save her life.

But she's still captured. King leaves them locked in his futuro-shack and brings the Heroes of Lallor to move into Legion HQ. To keep them believing the Legionnaires are the bad guys, he does some fancy editing of their conversations.

What do you mean, reel-to-reel technology is outdated? Feeling betrayed, Dupe-Boy threatens the captives with a frozen-sleep lamp coma, but the kids won't go so easy. Once again, Shrinking Violet escapes, this time to a spaceship so she can warn some of her team-mates. Duplicate Boy follows and is soon duplicating the powers of Colossal Boy and Mon-El, but - BOMBSHELL! - Violet vouches for him because she's in looooooooooovvvvvvvvvvvvvve. 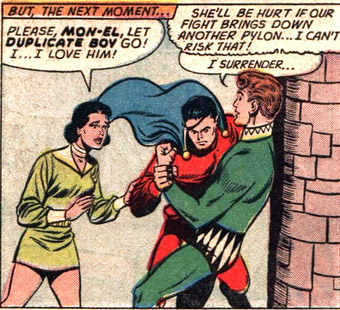 Meanwhile, the other Lallorians are wondering why Dr. King has locked the Legion's records room. Evolvo-Lad uses his obviousness power to determine King is hiding something. Gas Girl slips into the cracks and reviews some of the Legion's home movies...

...and discovers two things: 1) The laws of physics in the 30th century really HAVE changed, and 2) these Legion kids are goodies! They turn on King, capture him, and free the captured Legionnaires. But the guilt, the guilt! WE'RE NOT WORTHY, they say as they prepare to walk into the power nullifyer King was going to use on the Legion (so... why didn't he just start shooting Legionnaires instead of bringing these other heroes to Earth?). Goodbye, cruel world of superheroics!

Superboy intervenes and lets them keep their powers! Can he make it an even happier ending? Sure! He flies them back to Lallor where they've deposed the prime minister after what he did to those sweet kids, and Duplicate Boy promises to use Superboy's super-speed to visit Violet, a relationship that would last until she's replaced by a Durlan spy, he notices, but doesn't do anything about it. Still, how many couples can say they made a long-distance relationship work for some 20 years?

He got the better bargain. The Heroes of Lallor might as well have walked into the depowering ray for the all the impact they've had on the 30th century. I guess Lallor really IS a distant planet.

Who else? You'll see more from the "H" volume, but to get to the Heroes of Lallor, I did skip over Hawk Son of Tomahawk on the basis that if you know Tomahawk, it's a no-brainer to understand who he's supposed to be (still... he deserves a shot on the second pass). Harlequin might have made it too, but her role as Green Lantern's wife gave her a higher profile than the three entries I DID select for inclusion in Who's This?
Comics Legion Silver Age Who's This?

Unknown said…
Were any of these guys ever invited to join the Legion? I can't imagine a hero in the setting NOT wanting to be a Legionnaire; virtually all of the ones who aren't on the team tried out and were rejected.
June 13, 2013 at 1:18 AM

Anonymous said…
The Heroes were well used by Levitz in his long run. PErsonaly I love Duplicate. He is the most powerful being in the 30 century, but nobody knows it becouse he is a JERK!

Siskoid said…
Rex: Nope, never. Could they have gotten in? Gas Girl and Evolvo Lad have the sort of powers Legionnaires laugh at and then the applicants turn into Substitutes or villains. Beast Boy and (on a technicality) Duplicate Boy have powers already represented in the Legion, which means they could not constitutionally be allowed to join. (Dupe is out on a technicality because he's be "broken" and make all the other Legionnaires redundant.)

karl said…
The only thing I barely recall of these heroes is that Duplicate Boy was the on-off boyfriend of Shrinking Violet.
June 13, 2013 at 4:08 PM