Who Are Hunter's Hellcats? 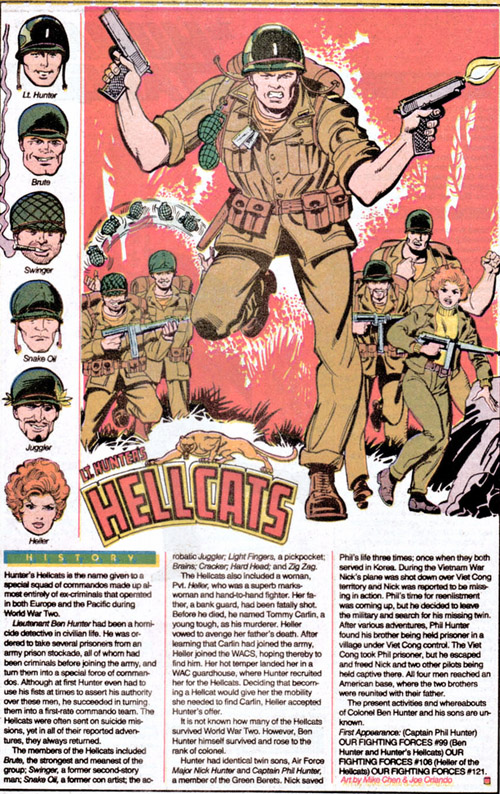 The facts: In Our Fighting Forces #99-106 (1966-67), a Capt. Phil Hunter was a Green Beret in the Vietnam War. In #106, the strip handed the torch to Phil's dad, Ben, a former policeman who was handed a team of convicts - the comic book version of the Dirty Dozen basically. In #121, they were joined by a female soldier called Heller, who stayed until the strip ended soon after in #123 (1970). Who took the Hellcats' place in Our Fighting Forces? The Losers, that's who.
How you could have heard of them: Uhm... Our Army at War #269 reprinted one of the stories in 1974, but the unit did not appear anywhere else before (or indeed, after) their Who's Who entry.
Example story: Our Fighting Forces #117 (Jan-Feb 1969) by Robert Kanigher and Frank Thorne (with a cover by Joe Kubert) 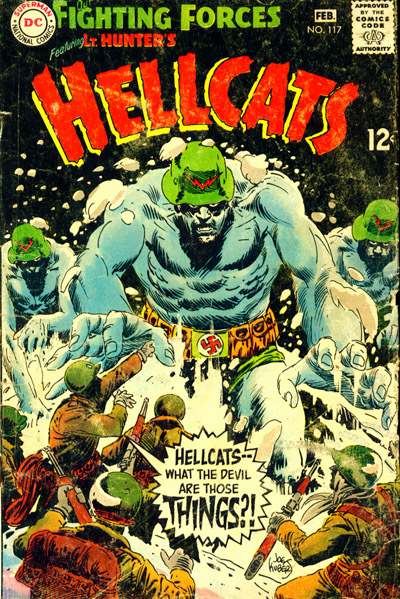 I have a feeling the early stories by Howard Liss and Jack Abel (who still inks this one) are more like the Dirty Dozen, with the characters at each others' throats and using their criminal skills in a war story format. By #117, they're a more unified group, and their stories (or this one, at least), might well have been a Losers script. The Hellcats' missions have a touch of the strange about them, their attitudes are a bit less professional than most, and their solutions pragmatic and inventive (and in other hands, might seem very violent indeed). Ok, end of preamble meant to alleviate my guilt at covering a story that doesn't seem to follow the strip's premise very closely.

A touch of the strange, I said? Well, when the Hellcats climb the Alps, they find this: 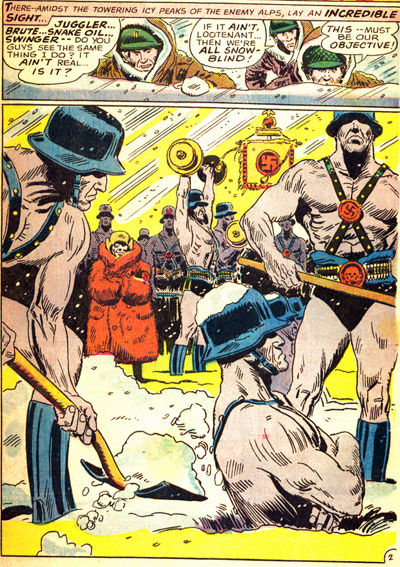 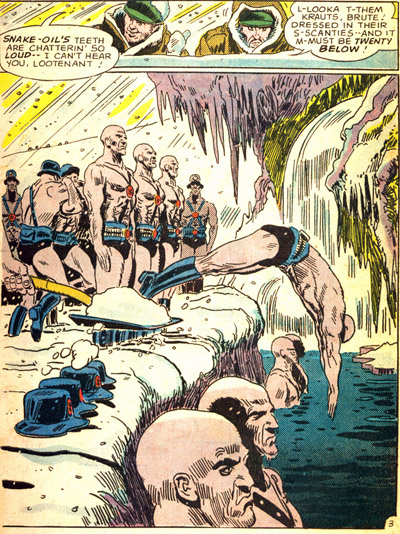 That alone merits a blog post dedicated to the Hellcats. 24 hours earlier, Kanigher was indulging in a bit of DC war comic continuity by having resistance fighter Mademoiselle Marie show up to give the Hellcats their next mission!

The Nazi secret weapon they're sent to destroy is a specially-trained unit able to resist the cold, veritable ice men. The first exchange of fire creates an avalanche. 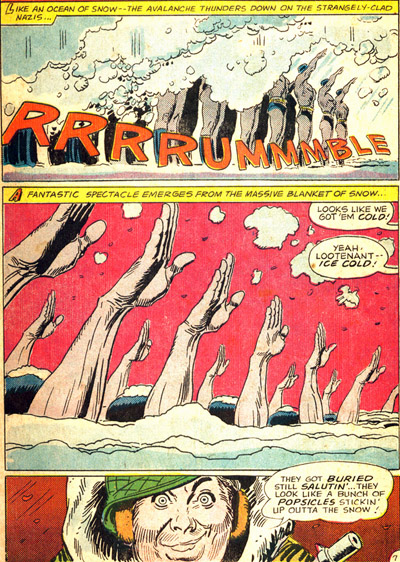 Problem solved, right? Wrong. The Nazis dig themselves out and walk towards the Hellcats! Well, they're not armed, but it kinda looks like our boys spent all their bullets on those first shots because they warm themselves up with fisticuffs. That's the thing about suicide units, you can skimp on the ammunition. The Hellcats are used to improvising though, and there are all these gas drums lying around. 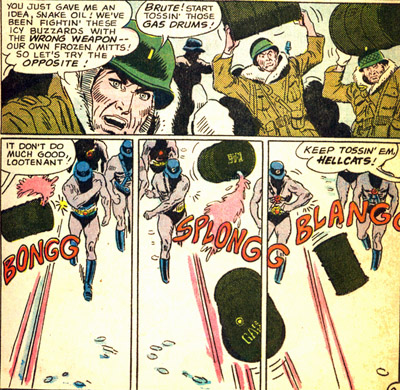 Oh, they had bullets left after all, because a bit of machine gunning gets a fire started, and the Nazis, while supermen in the cold, are martian manhunters when the going gets hot. Back to fists, and they all fall. 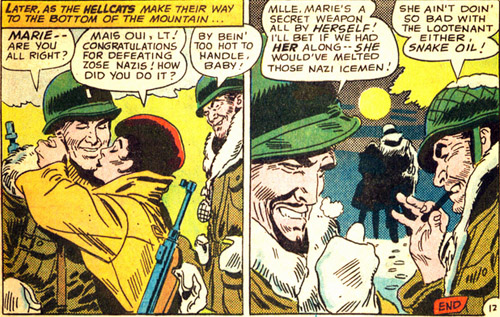 Well, Captain Phil Hunter needs a mom, doesn't he? For getting some comfort from Mlle Marie, Ben Hunter gets high marks indeed. I'm sure she doesn't go for all the war comics stars.

Who else? While someone could make a case for the first Huntress and Hyathis to be included in this series, I think I'm going to open Vol.XI because THAT one has a LOT of characters who deserve it.
Comics Silver Age Who's This?

American Hawkman said…
Yet another Hunter from Phil's dynasty was in Truman's Creature Commandos mini, and made an appearance in the OMAC Project, named Nick Hunter.

I was kind of hoping for Hyathis simply because I wanted to see you explain her post-CRISIS retcon in Hawkworld as Shayera's grandmother. :)
June 26, 2013 at 11:05 AM

Kid Kyoto said…
Still weirded out by the face that Snake Oil seems to be the one juggling rather tan Juggler.
June 26, 2013 at 11:55 AM

Unknown said…
Man, Hunter's Hellcats. You know why I didn't see that coming? Because I'd completely forgotten about them.

Siskoid said…
No chance! They're far from forgotten and keep appearing, most recently in Final Crisis.