Who's the Grim Ghost? 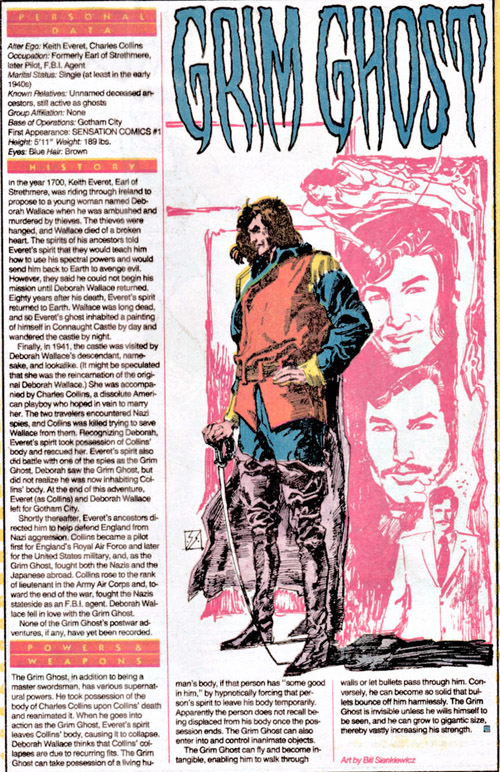 The facts: The Gay Ghost appeared in Sensation Comics #1-13, 15-33, and 38, his last story until Secret Origins Vol. 2, #42 (July 1989), though obviously he appeared with a new name in Who's Who a few years before. Most recently, he appeared in Animal Man #25 (July 1990) as one of many characters in limbo. He was the brainchild of Gardner Fox and Howard Purcell, the latter working on the strip for most of its run with an uncredited writer (possibly Fox, probably his own self).
How you could have heard of him: The limbo joke was made again in Final Crisis Superman Beyond 3D where he was on hand to help Superman save reality. Or you might have heard of these old comics in a Law & Order episode called "Love Eternal" (Season 20, episode 22) where "he was cheerful" became a recurring gag. In any event, he should not be mistaken for the Atlas Comics character also called the Grim Ghost.
Example story: Sensation Comics #4 (1942) 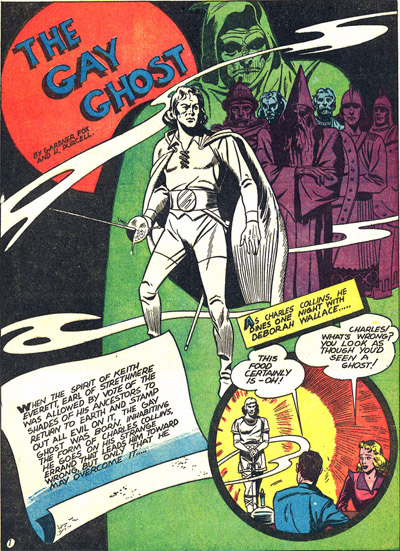 So the big question is: Does the new name fit him? Is he more of a grim or a gay (cheerful) ghost? Well, whatever he is, his strip seems intent on making modern gay jokes, totally by accident. At least I think they're accidents. Take these early panels, when the G-Ghost, possessing Debbie's dead boyfriend/secret identity Charles Collins is visited by another ghost. 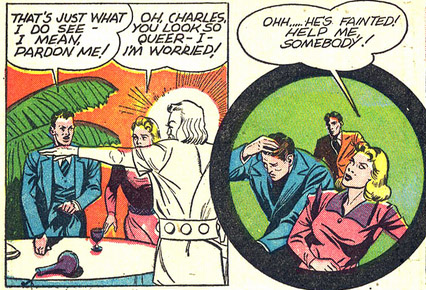 Debbie must be thinking Lois Lane has it good with mild-mannered Clark Kent right about now. While Charles is out, his spirit - actually 18th-century English ghost Keith Everett who seems to have picked up the American vernacular quite well thank you - can go on adventures, and this time he's been called by the ghosts of his ancestors who serve as Parliament of Trees/Mission Impossible auto-destruct tape for the hero:

The evil they tell G.G. to defeat is - and this shouldn't come as too much of a surprise - NAZI GERMANY! So the next day, Charles enlists and heads off to Europe as a pilot assigned to the British fighting forces. And he's quick to volunteer for missions because ghosts told him to! When fog makes it impossible for planes to take off, Charles takes a massive nap during which he'll punch a heck of a lot of Nazis. As we saw with the Ghost Patrol, it's something something revenants love to do. It's not all punching, of course. He also mows some down with a machine gun, and forces a train collision!

He next goes on the battlefield, personally flying bombs into German platoons, rescues British air aces by crashing enemy planes and, uhm, participating in a vandalism campaign that draws a big "V" for victory all over Nazi stuff. Including a gestapo officer's bum! 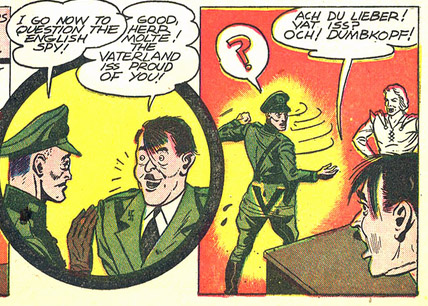 Wait, is that Hitler? It is! OMG ARE WE GOING TO GET A HITLER PUNCH?!

Alas, no. Missed opportunity. But the sometimes-gay, sometimes-grim ghost had to rescue the captured graffiti artist so... priorities. 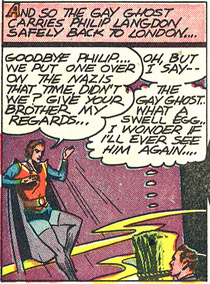 I think someone's got a little crush! Gay/Grim Ghost, he's so dreamy! And by dreamy, I mean asleep. It's too bad he had to wake up, a couple of hours more and he would have had this war thing all sewn up.

And so it went, abroad and at home, Nazis Nazis Nazis. No word on whether he and Debbie ever tied the knot, or if that would have been very wrong indeed. As far as the Gay/Grim divide, I'd say Everett was more Gay than Grim. By which I mean cheerful. Because punching Nazis and destroying their stuff while you are completely invulnerable is big fun.

Who else? Between our last entry, the Golden Gladiator, and this one, I might have had a go at Gravedigger or Grimbor, but neither seemed obscure enough. The former can be found is relatively recent war comics, and the latter is a Legion villain, and they're all obscure to at least one segment of the comics-reading population, but not really to another. Still... on the next pass for sure. For now, we're heading into Volume X.
Comics Golden Age Who's This?

Bob said…
To the best of my knowledge, the "Grim Ghost" appellation was first applied in 1972, when one of the original Gay Ghost stories was reprinted in World's Finest #212. Parts of the story were relettered with the new name.
June 4, 2013 at 1:50 PM

Siskoid said…
That's very interesting! Narrows the window down as to when the word changed its meaning.
June 4, 2013 at 2:26 PM

Unknown said…
Maybe I'm being a snob, but I think Bill Scienkewicz is a little better than this character deserves. Of course, I also don't think he deserves the whole page treatment when Animal Man and the Silver Ghost couldn't manage that.
June 5, 2013 at 7:16 AM

Siskoid said…
I can't explain the decision, but I don't hate it. It gave us a very nice illustration and made us discover a long-lost character from DC's history. I'm all for it.
June 5, 2013 at 7:23 AM

Martin Gray said…
I don't mind who Bill Sienkiewicz was given to draw, I'll take them. And I suspect GG and Philip are living-ish together to this day, in a wonderfully Vicious relationship.
June 10, 2013 at 10:40 AM