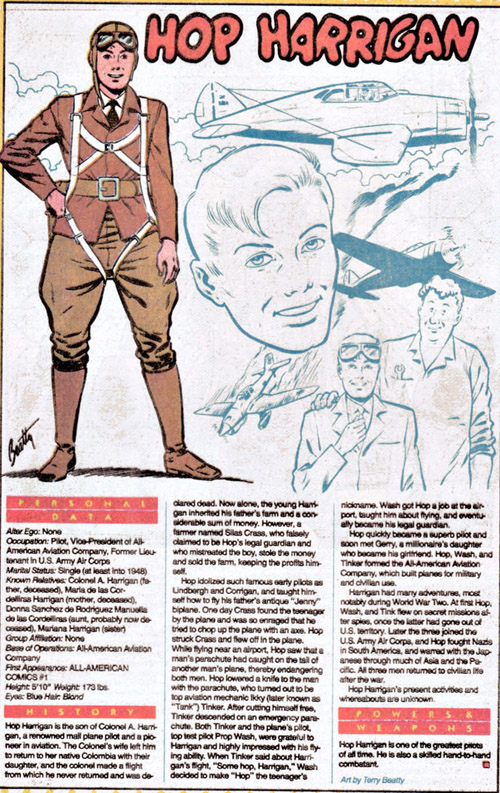 The facts: For a character we don't remember today, Hop Harrigan seems to have been a very successful aviation ace strip. Created by Jon Blummer (who wrote and drew the vast majority of his stories), Hop premiered in All-American Comics #1 (1939) and remained a feature of that book until issue 99 (1948) before the title started to focus singly on western material. But the character "hopped" around a lot as well, with strips running in various issues of All-Star Comics, Flash Comics and All-Flash, Green Lantern (vol.1), Comic Cavalcade, Sensation Comics, Wonder Woman (vol.1) and others, in stories ranging from 2  to 6 pages. All-Star Comics #8 is of particular interest because it features a 2-page prose story in which Hop meets the JSA, cementing his place in the DC Universe and landing him a spot in its Definitive Directory. Hop was also the star of a radio show from 1942 to 1948 (Hop's sidekick Tank Tinker was played by two actors, one of which was the voice for Popeye's Bluto), and of a movie serial in 1946. Don't forget to add Hop Harrigan to your list of DC stars who got a movie!
How you could have heard of him: Beyond his Who's Who appearance (and the usual cameo in History of the DCU that usually produces), Hop's only appearances after the 1948 were in G.I. Combat #152 (1972), a strip in which in shoots a lot of Japanese soldiers to the "tune" of the 23rd Psalm,  atypical of his stories, but written and drawn by Jon Blummer (with some help from King David, I guess); and a couple issues of Young All-Stars.
Example story: All-American Comics #48 (1943) reprinted in America at War: The Best of DC War Comics (Simon and Schuster, 1979) 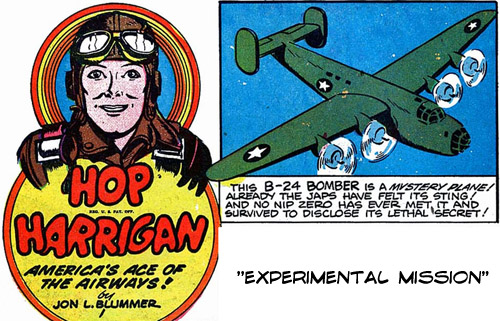 Form my research, it would seem Hop Harrigan's adventures were more serialized than the average Golden Age character, or at least, his circumstances were allowed to change over time. He was always an aerial ace, but having started out as a "boy's own adventure" character, he eventually became air air force cadet, and then a pilot fighting Nazis in South America and the Japanese in the Pacific theater. Beyond the war, he co-owned the splendidly-named All-American Aviation Company (in case Green Lantern Alan Scott ever tried to tell you HE was the book's headliner), which I guess kept him in trouble through the late 40s. The story I chose, one of the very few made available after '48 (needs must), is from the war years and seems to end on a cliffhanger. The strip introduces us to the bomber's crew, which includes, of course, Hop Harrigan. His father figure Major Prop Wash and his mechanic and best friend Tank Tinker, who have shared his world since the beginning, are left behind to guard the secret base in the Aleutian Islands. Captain Knuckleduster needs two things, see. One: A pilot for the "Pea-Shooter" prototype. 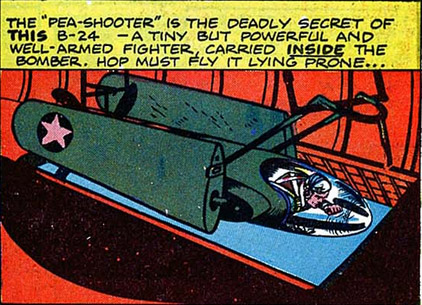 And two: Someone to tell him racist poetry is the reason these comics don't get reprinted very often. 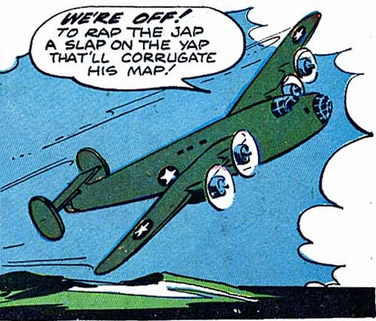 Their target: A Japanese fleet. The Pea-Shooter is lowered from the bomb bay and while the bomber continually bombs the ships, Hop is free to take care of their planes and buzz the ships' gun turrets.

But when a thick fog rises up, there's no way for Hop to get back on the planet's launching trapeze. Knuckleduster decides to land the bomber on the aircraft carrier and commandeer it, something that makes the ship's captain unusually happy. 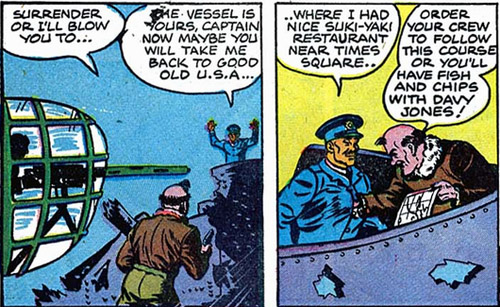 BECAUSE THE USA IS THE GREATEST! Also, WORLD WAR II PROPAGANDA! And of course, SUKI-YAKI RESTAURANT! Meanwhile, Hop is still in the mix with Japanese "zeros".

Oh no! The bomber crew bring the captured carrier back to base, where Prop and Tank are naturally upset their good buddy is missing in action and presumed dead. But with 51 more All-American issues to go, you just know he'll turn up alive, and in true Hop Harrigan derring-do action, he's guided himself right back to base.

Not just to base, but right into a safety net. Hop Harrigan never misses, yo. The last blurb hints that the next story will show us how badly Hop was wounded, and it does, along with more pea-shooting action. It really is a serial!

Despite his multi-media popularity at the time, Hop soon faded from our thoughts and comics, leaving the skies to other aces like the Blackhawks and the Silver Age of capes. Would he still be around if he'd gone costumed hero? Turns out he did, twice: 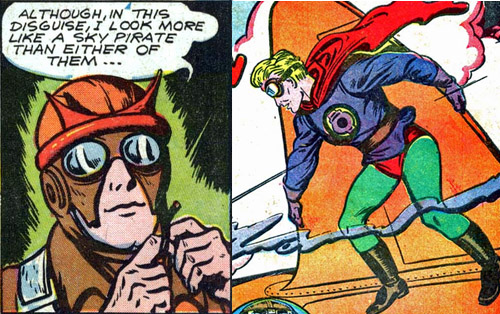 He put on a mask and flew the skies as the Guardian Angel in All-American #25-28, and tried to give the finger to All-American's better-known leading man as the Black Lamp in #78. Neither identity returned.

Who else? One more from Who's Who vol.X before we hit the "I"s and "J"s...
Comics Golden Age Who's This?

Zundian said…
I was going to comment that Hop's second costumed identity seemed like a parody of his book-mate, then saw it was named Black Lamp and decided it was self-evident.
June 19, 2013 at 7:41 AM

Siskoid said…
That's the better-known leading man I was referring to.