Who's the Invisible Destroyer? 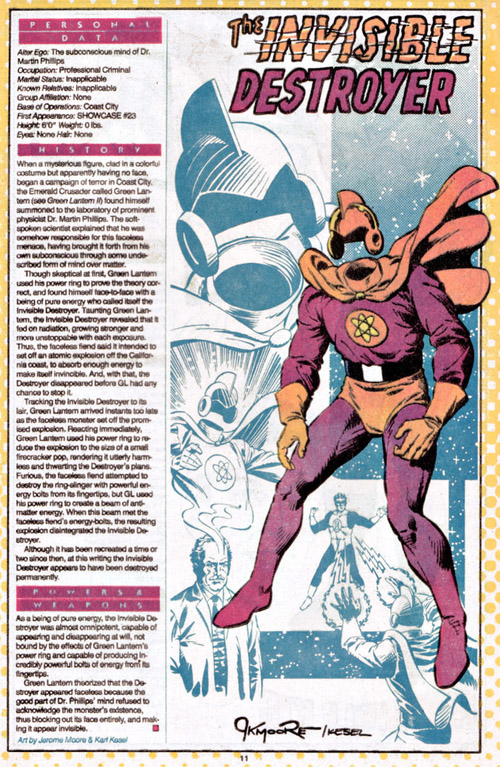 The facts: Green Lantern Hal Jordan first appeared in Showcase #22 (1959). The Invisible Destroyer, in Showcase #23. He is, in fact, Hal's first supervillain. Not his most relentless though. After this story, he appeared only once more before that Who's Who page, as a quickly-handled distraction in the middle of the Key's plot in Justice League of America #41 (1965).
How you could have heard of him: While the Destroyer has appeared half a dozen times since, it's always been either in flashback to his first story (most notably in Green Lantern Annual #4), or as an often absurd (and amusing!) cameo. His only full-on (though redesigned) appearance is quite recent, in the Green Lantern Animated Series tie-in comic's second issue. 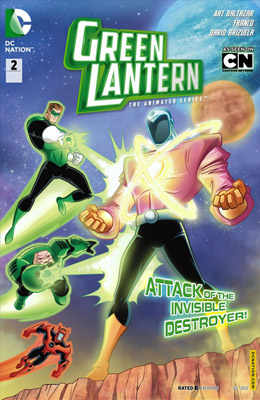 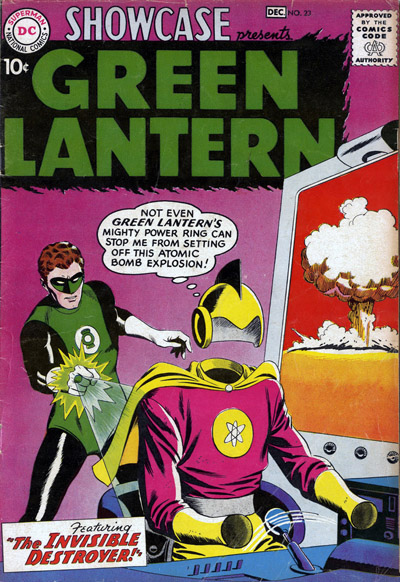 So Hal Jordan is still very new at this when he walks into Carol Ferris' office to lay some jealousy traps, and she points out an item in the personals of Coast City's tiniest newspaper.

That's right, a sale on shoes! No, I mean, a personal call to Green Lantern! Hal immediately leaves without further flirting. On his way, he comes across the "phantom thief the newspapers have labelled the Invisible Destroyer" despite the fact that while he's broken into places, he's never stolen anything, nor destroyed anything. Who knows how nicknames get started, am I right? But he IS invisible. 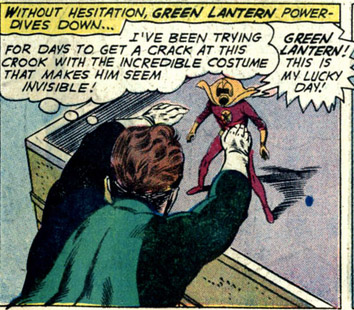 Sort of. Hal, already the DCU's thickest superhero, concludes it's the incredible costume that makes the Destroyer seem invisible. Because that's how I want my invisibility-conferring costume to work. Let's just say it's a lot of work just to hide one's identity. Obviously, Hal is wrong. That goes without saying. And because this is a Silver Age Green Lantern story, his ring is powerless against the villain. Must be yellow pollen season. 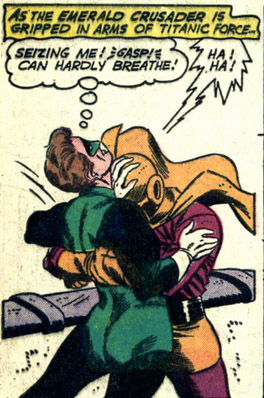 I do love the Destroyer's radio voice though. So he gives GL a big hug and pops out of reality. Hal finally gets to 854 Wilson, the house of famous scientist Martin Phillips, where he's been before as his other self. Because famous scientists entertain test pilots all the time. Phillips shows Hal his drawings (not a metaphor), Gil Kane-quality doodles of the Invisible Destroyer, absent-mindedly produced days before pictures showed up in the paper. Phillips is sure that his imagination has released the creature, not because any of his experiments might have caused such a thing, but because he's read Jekyll & Hide, so obviously, such things are not only possible, but probable. SCIENCE!!! To test the theory, Hal uses his ring to put Phillips in a deep state of concentration. 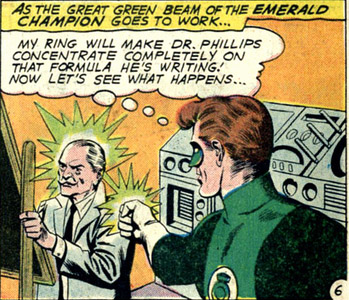 And it works! The Destroyer is released momentarily. And by momentarily, I mean clumsy Hal beats on a trash can by the time he reacts to its presence. 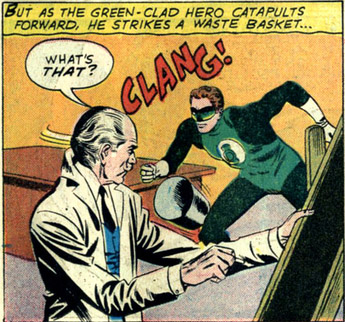 So they try another experiment, probing Phillips' brain, inch by inch, with ring energy. You know, in case they want to try a quick lobotomy. That works too.

The plan is to absorb lots and lots of radiation - present in all the places the Destroyer broke into - to become the most powerful being on Earth. So next up, he's going to set off an atomic explosion to get all the radiation he needs! There's something of a difference between the explosion promised by the splash page and the final result: 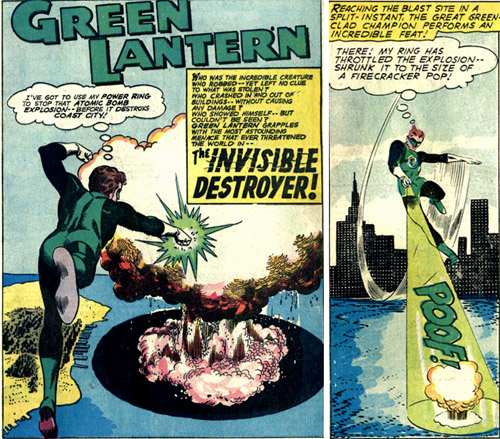 One of the ring's cuter effects. When the Destroyer attacks him, Hal again finds his "green beam" can't effect him, likely because he's "pure energy". In other words, the ring can't affect energy. Energy like that atomic explosion? Energy like the Destroyer's energy bolts which Hal decides he CAN affect? Broome has a lot of gall invoking scientific theories at this point:

The Invisible Destroyer is apparently destroyed as energy and anti-energy meet, though the JLA appearance says he was only banished to the anti-matter universe for a time. Dr. Phillips is free of the creature, with no further explanation of where it came from. If it's a mental construct (and the retro costume would support the idea), then Phillips is the real danger and could bring something like that into being again. If it's an alien entity transporting itself to Earth through Phillips' mind, that's something that might have been worth a few words. Whatever the truth may be, it looks like the Destroyer eventually became independent of Phillips and free to go on to a life of amusing background appearances.

Who else? There was a time, I, Vampire would have been a prime candidate, but a New52 series changed that. I thought about Iron Wolf, but the strip is too well-considered to truly be obscure. No, my next target is someone who scored but half a page in Who's Who vol.XI.
Comics Green Lantern Silver Age Who's This?

American Hawkman said…
Always liked the Invisible Destroyer... I take it as being a manifestation of nuclear psychosis in the scientist's mind, combined with a powerful telekinetic presence. Those things combined should have gotten more play over the years, especially since Englehart established that invisibility is an absolute defense against Green Lantern energy. (Since ALL light passes through invisibility by definition.)
July 24, 2013 at 3:21 PM

Garnet said…
The pros and cons of the Silver Age encapsulated: your story might be stupid, but you might have Gil Kane to draw it anyhow.
July 24, 2013 at 5:30 PM

Unknown said…
Man, I thought the Invisible Destroyer would be perfect for this column, but figured that as a villain he had no chance because bad guys don't have their own stories the way heroes do. Now I don't know what to believe.
July 25, 2013 at 2:38 PM

Siskoid said…
Part of the problem is my own change of modus operandi. Originally, I thought as you do, and didn't include very many villains (I plan to return to Aegeus now though), and then started doing more and more of these features, and found many villains were worthy.
July 25, 2013 at 2:57 PM