August 20, 2013
On the occasion of completing reviews on the 1984 season of Doctor Who, I should like to re-imagine it as a role-playing game campaign using Cubicle 7's Doctor Who RPG. (Go back one, to Season 20.) 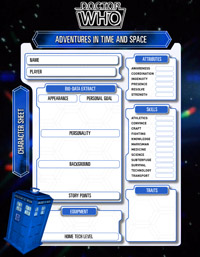 Eric has his hands full this season dealing with players leaving and entering the campaign. Three players, in fact, including the Doctor, or four if you count the fact that no one wants to play Kamelion, leave in rapid succession. They've all got their reasons, but Eric never acknowledges the fact that his GMing style might have something to do with it. He's good at providing opportunities for action, but has a certain nihilistic streak that pushes him to kill off all his NPCs no matter what the heroes do, leading to a tangible lack of satisfaction on the players' parts. They can never really win! Dark is okay, but it seems a bit relentless and as one player put it "It stopped being fun". Eric also has a tendency to get lost in his NPCs, cut scenes between them going on for a bit too long while the players sit and listen. Still, he does some of his best scenario-crafting for this season, especially towards the end, despite being preoccupied with finding new players to replace the ones he's about to lose.

The Characters
-Peter was always going to play three seasons of the campaign - he likes variety in his gaming too much to do otherwise - but everyone seems to be moving on, so it's a good time to stop paying Story Points to get his Doctor out of lethal danger and let nature take its course. He'll spend much of the season being reckless and trying to derail the GM's bloodthirsty railroading.
-Janet is the first to leave, but not before Tegan gets a chance to play opposite the famous Daleks. She's sad to leave the group, but was basically sticking around for them and not the experience, and effectively leaves the hobby itself.
-Mark asks the GM to wrap up his personal arc before he goes and is kind of miffed when Eric asks to see Turlough's back story again. Now that he's free of the Black Guardian, his character can explore his own, irritable kind of heroism, even as the universe around him keeps proving his self-preserving streak right.
-Nicola replaces Janet on the team (no one replaces Mark) and creates Peri, an American botany student on vacation. She's got almost know role-playing experience and tends to let other players take the lead, not too sure how her choices in character generation relate to the game.
-Colin is to be the new Doctor, and even gets to play a full story at season's end after Peter graciously gives him his seat. His Doctor is loud, pompous, highly literate, enthusiastic and has no fashion sense. His character picture is really unfortunate, and he almost immediately regrets giving him that look, but it doesn't seem important enough to warrant printing out a whole other sheet and starting over.

Warriors of the Deep. When he did research for the 20th Anniversary season in the RPG Club's archives, Eric found lots of elements he liked, but couldn't fit into his planned adventures. Among these, a proper Daleks story (more on which later), and the Silurians and Sea Devils, the former masters of Earth, lying in wait underground. He tweaks them a bit, teaming them up and giving the Sea Devils a sort of samurai look, and sets the story on a futuristic sea base fighting a Cold War. The Doctor tries to make peace between the humans and reptiles, going by the provided back story and following former Doctor Jon's lead, but (see The GM) everybody dies.

The Awakening. Up next, attempting to visit Tegan's grandfather, the TARDIS crew falls afoul of the Malus, an entity bridging the time of the English Civil Wars with the present's "war games" in a small English village. It's a shorter adventure than most, quickly created to give a couple of new players a chance to try the game out and connect their varying character concepts. Keith plays Will Chandler, a 17th-century peasant, and Polly plays Jane Hampden, a gutsy school teacher (yes, once again, no guest wants to use Kamelion). They have fun, but it's rather crowded around the table. In any case, they don't end up joining the campaign.

Frontios. The last Earth colony on the edge of extinction, under fire from bug-like Tractators who use their gravitic powers to cause trouble from beneath the colony's feet. It's not unlike what Eric did with Warriors of the Deep. The GM also pulls a fake-out on the players, seemingly destroying the TARDIS and letting them believe they'd be stuck in the far future for a while. But with the help of a large number of Story Points, the players manage to use the Tractators' powers to reconstitute their ship and home. 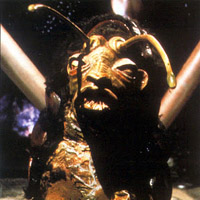 Resurrection of the Daleks. There are some sports events the players don't want to miss, so they combine their twice-weekly sessions into longer weekly sessions for a fateful (and for most NPCs, fatal) encounter with Davros and the Daleks. The GM sows the seeds of a Dalek Civil War which he wants to return to, and Peter's Doctor almost ruins those future plans by trying to execute the Daleks' creator. Tension is definitely building between this group and the GM. This is when Janet decides to leave the group, for real this time. The players are a bit surprised at how tearful they get.

Planet of Fire. A lot to do in this next scenario. The GM must introduce Nicola's Peri to the group, help Mark "arc" Turlough and give him the opportunity to leave, do that "Iron GM" thing he hates though inserting "a volcano" into a story is more inspirational than past impositions, and while he's at it, he'll write out Kamelion, using him as an NPC under the Master's control. It works out remarkably well though the players would gladly have just thrown Kamelion out the door into the vortex in between sessions. But Mark plays one of his better games, leaving on a high, and Nicola is smoothly assimilated into the group. Knowing he's to leave soon, Peter has his Doctor NOT save the Master at the end of the story, trying to leave a legacy for future players, but the GM has little intention of letting his recurring villain die like that.

The Caves of Androzani. It's Peter's last story and though it's another NPC massacre (and in this case, also offs a PC), it's pretty special. The villains - Morgus and Sharaz Jek especially - are sharp, interesting and operatic. The plot full of twists based on the PCs' presence though out of their control (Eric's nihilism again). And the characters are always under credible threat. Though Peter was planning on letting the Doctor's luck run out, there are so many reasons for spending Story Points in this story that it actually DOES. Had he wanted to continue playing, neither he nor Nicola would have had the points to pay for a timely save. Eric went all out and recorded messages for Peter from everyone he gamed with, and played them during his "death" to make his life flash before his eyes in a sense. He then stood up and passed the baton to Colin and wished him good luck. Bit awkward, that. 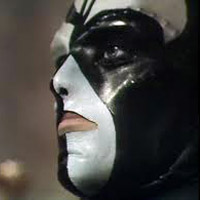 The Twin Dilemma. Eric put so much in his last game with Peter, he sort of fudged Colin's first. Neither this new Doctor nor Nicola's character had been present during Frontios, so he recycles the idea of underground slugs with a plan for moving planets. In any case, the focus is on the Doctor's regeneration troubles. On advice from the GM, and without telling Nicola anything about it, Colin plays the regen crisis as a psychosis. He even tries to strangle her character. Let's say this starts their relationship on the wrong foot and their banter is closer to bitchiness and recrimination. Still, it's nothing personal and they look forward to playing together over the next season. 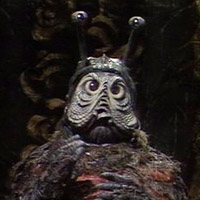 The GM feels energized by the possibilities of a Doctor and companion team he had a hand in selecting, and is full of ideas for their first full season. But does that mean the body count will drop? That's a story for another day!
Doctor Who RPGs Seasons of DWAITAS