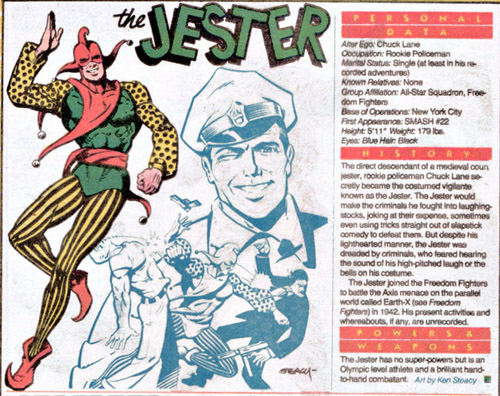 The facts: This obscure Golden Age hero was a regular feature in Quality's Smash Comics from issue 22 to 85, from 1941 to 1949, and though he was obviously part of the DC/Quality deal, he was apparently deemed too goofy to make it into the Freedom Fighters despite references to the contrary.
How you could have heard of him: As you might expect, only fervent Golden Age lovers ever dared putting the Jester in their comics. Roy Thomas gave him a couple of cameos in All-Star Squadron, and James Robinson had him appear in Starman #46 and the Golden Age mini-series. Chuck Lane appeared more recently in Palmiotti and Gray's Freedom Fighters as the aged leader of the Arcadians, a group of patriotic radicals looking to cleanse U.S. governments of corruption. His son Charles, as a new Jester, tangles with Freedom Fighters and is killed. Not the best of legacies.
Example story: Smash Comics #44 (1943) by Jester creator Paul Gustavson 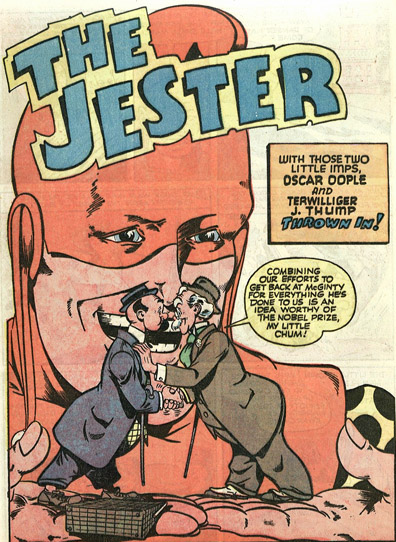 From what I've seen, the Jester started life a pretty standard fist-fighting hero. Gustavson, in line with what I'd almost call the Quality house style, used a fine graceful line and stacked a lot of panels on each page to give the reader as much story as possible. But as time went on, Quality (or at least, Smash Comics) was including more and more humor material and Gustavson's art on the strip took on a heavier line and a more cartoony style, turning him into a Guardian figure (both characters ARE policemen in their daily lives), though I wouldn't put his supporting cast up there with the Newsboy Legion. So it's one of these stories I decided to use as an example, if only to relieve the monotony of what might otherwise have been quite close to a Firebrand strip. Here are a couple of the characters Jester looks in on:

I guess McGinty is the Jester's, or rather Chuck Lane's, boss, a blowhard who deserves what mischief he gets. Oople and Thump will provide some (Thump, in brown, is a renowned thief who steals a sandwich out of a man's hands while he's spreading mustard on it as he enters the story!). The guy in the middle is Gustavson himself! 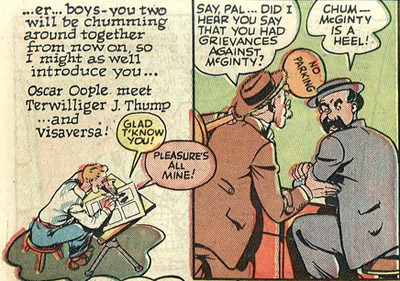 This isn't a device he uses in every issue, but it shows the kind of whimsy the strip was likely to get up to. Gustavson uses it to show how he plans out his stories (above), but also makes himself a participant, like a frustrated journalist hankering for a story (below). 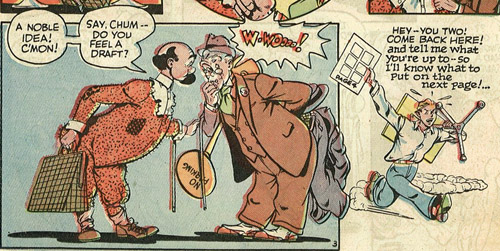 And it gets REAL meta at times. 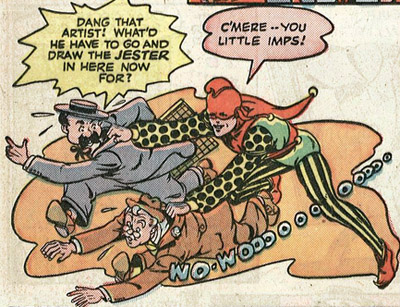 See, Oople and Thump have drugged McGinty and brought him somewhere. The artist has to draw the Jester so they can be interrogated. They know they're in a comic, and so does the Jester! So why hasn't he been hanging out with Ambush Bug all this time?! Anyway, the mischief makers don't reveal their secret, but the Jester hears McGinty's pleas for help coming from an Old Maids' Home. 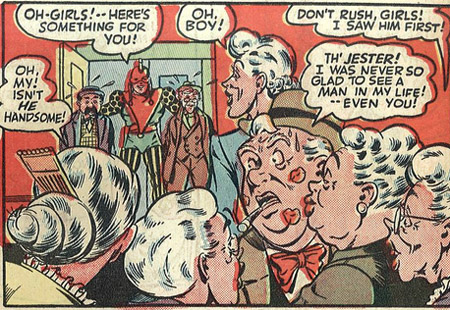 And this being comics and meant for young boys, McGinty hates all this female attention, and the Jester thinks it's an appropriate punishment for Oople and Thump to leave them here instead. But destiny has other plans. They escape along with McGinty and the Jester gets all tat tender-lovin' care instead! He begs for help from McGinty, but let's just say they don't have a very good relationship. More J.J.J. than Commissioner Gordon, let's say. And Gustavson? He knows a little auto-derision is good for the soul.

So that's what a Jester strip was like, at least in 1944. A bit of silliness at the back of a book fronted by that Spirit rip-off, Midnight, which also had a humorous supporting cast.

Though the Jester is not very present in the DCU, his name HAS resonated with readers, at least if I look to role-playing campaigns in the DC Universe! In the Who's Who Podcast these pieces are companions to, Shag has said HIS group had a hero called the Jester. And mine did too! My player Bass had mashed-up the Flash and the Joker (lightning+Joker venom = super-speed and laughs) and called him the Jester. Proof: 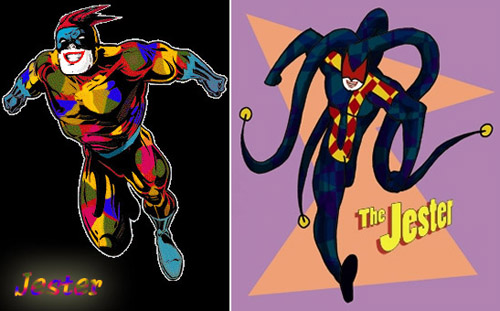 Yep, the character lasted long enough to warrant a costume redesign. Art pieces by Bass himself. The original Mike Wieringo rip is still my favorite though.

Who else? We're hitting the Johnnies section of that issue of Who's Who and only one of them in my opinion, warrants exploration.
Comics Golden Age Who's This?

Unknown said…
I'm gonna go ahead and guess Johnny PERIL is up next. I just realized I don't even remember who he is at all, and got him mixed up with Jonny Double.

Like a lot of half-pagers, the Jester seemed kind of boring as presented in Who's Who, surprised to see his stuff was alright.
August 7, 2013 at 12:34 PM

American Hawkman said…
Personally, Double and Peril are obscure enough for me. Never seen a Double story at all, and Peril only from his Eclipso appearance. Honestly, even the non-JSA Johnny Thunders wouldn't be inappropriate...
August 7, 2013 at 8:39 PM

Siskoid said…
Rex has it, it's Peril. Double is in Volume XII anyway, because he insists on spelling his name Jonny. For whatever reason.

American Hawkman said…
I'd certainly understand skipping Jonni... while she's obscure NOW, she was coming off an eponymous mini and going into a recurring Infinity Inc. Run. I'm a little shocked, actually, that she slid into such obscurity thereafter... she's a fun character, and a Silver Age style reworking of the Johnny Thunder concept. Still think it's beyond odd that Alex Ross intended for her to marry Black Lightning though....
August 8, 2013 at 4:52 PM

The Irredeemable Shag said…
Love this write up on Jester!!! Such fun, and amazing he was aware he was in a comic book!

Thanks for the shout-out!

Siskoid said…
It explains, I should think, the wink he gives in the surprint.