The DVDs I got this week include 2 Days in Paris, Burning Man, and Star Trek Into Darkness (haven't seen it yet despite this blog's former main focus), but I'm most excited by a collection of pulp novels starring The Spider - 6 books, 12 stories - which I can't wait to start on. 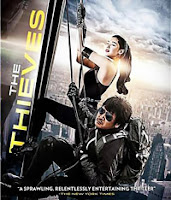 DVDs: I'm a big fan of heist movies, and Choi Dong-Hoon's The Thieves is a good one about a Korean crew that goes to Macau (Hong Kong) to join up with a Chinese crew (which includes the always excellent Simon Yam) to steal a precious jewel from a casino hotel guest. While there's plenty of action, the focus is very much on the large cast of characters and their competing agendas, most of them memorable (though I admit losing some of my interest when my very favorite characters were pushed out of the story, I guess that's its own compliment). While I've seen the "types" in other heist movies, turning a good number of them into women (the older con artist, the undercover cop, the maverick safe cracker, etc.) freshens those types up and creates a new dynamic. This isn't an Ocean's Eleven where loyalty is a given, it's very much every man for himself, and the moral is that you can't trust a thief. Clever, fun and involving. The DVD includes a few promotional featurettes, short though they do feature a lot of behind the scenes footage and interviews. 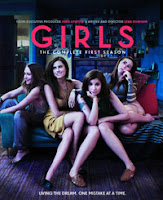 After watching Tiny Furniture, I immediately became a Lena Dunham fan, and HBO's Girls is basically Tiny Furniture the Series (with a Judd Apatow touch). The comedy/drama follows four young women living in New York and basically floundering, professionally and romantically, a couple years out of college. Dunham writes and directs the majority of the 10 episodes, and brings her usual wit and brutal honesty to characters that she describes as being at the age when self-loathing and self-importance are paramount. True to life even when it veers into pathetic absurdity, these are characters you can empathize with, feel for, and yet mock, pity and/or get irritated with. It's all the crazy of one early 20s packaged in a show that hates morals and resolutions. The DVD includes commentary tracks on half the episodes, short "inside the episode" featurettes for each, and a couple of round-table discussions between the girls, and between Dunham and Apatow.

The second season of Girls sees the quartet fracture for a variety of reasons and consequently, seems a bit more random as far as structure goes. The four stars are not necessarily in each episode (they in fact had to write one of them out temporarily because of a pregnancy), and they interact with each other less and less, though we do get to delve into the "boys" in their lives a lot more. Dunham's character Hannah, in particular, is on a vertiginous downward spiral, which makes this season far less of a comedy, though no less watchable or involving. In fact, this season has had a couple moments that I feel have happened to me, and being neither female nor a 20something of this particular generation, that would indicate the spectrum of human interaction unlocked in this show has really widened over time. Girls' set-up was deconstructed this season, it'll be interesting to see if and how the cast comes back together in Season 3. The DVD package is similar to Season 1's, with 7 episodes' worth of commentary tracks this time, those same "inside the episode" featurettes, a round-table discussion between Dunham and the show's male actors, and a table read. Deleted scenes hinted at in the commentary are nowhere to be found however.

Josh Radner's take on the same basic idea - listless 20somethings in New York - in Happythankyoumoreplease is more romantic than Dunham's, but no less witty or well-observed. After I'd seen his Liberal Arts, I just had to see his first film, which isn't as tightly-focused as his second, but still filled with characters and moments that feel true, and the key to happiness is much the same, in accepting who and where you are and moving forward from there. If I call it less focused, it's that the various stories told, while thematically coherent and happening within a single group of friends, are fairly isolated from one another. Which I'm not actually opposed to, just noting it as a point of contrast. Worth your time, funny, romantic and touching. The DVD includes a commentary track shared between Radner and his producer, a featurette on the songs written by Jaymay for the film, and a few deleted scenes.

Books: Irvine Welsh's Ecstasy is a collection of three thematically-tied novellas from the author of Trainspotting, all three subtitled "romances" that feature fetishistic (often taboo) sex acts, revenge, phonetically-written British accents (I watch enough BBC programming to get my hear around them, though the third story did try my patience), and of course, the drug Ecstasy. I kind of wish the first story had been a novel. A writer of historical romance jilted by her husband starts writing pornographic passages into her next book (Welsh does a passably dirty Jane Austen) with a necrophilia scandal brewing at a nearby hospital thrown in for good measure. The characters and structure could have entertained me for more than 75 pages. It's a case of diminishing returns after that. I did like the second tale, about a bank robber who falls for an armless young woman who in turn wants revenge on the manufacturers of the drug that made her be born with this deformity, but the third and longest story has far less motive power. We switch between the points of view of two characters destined to meet, and while I like Heather's rapid-fire stream of consciousness, party-boy Lloyd's sometimes impenetrable accent has nothing to say I want to hear. I could (should?) have stopped after the first story and been quite happy with the book.

Your Daily Splash Page this week features a splash from every DC title, alphabetically, from Sandman to Secret Hearts.
Geekly roundup