October 01, 2013
On the occasion of completing reviews on the 1987 season of Doctor Who, I should like to re-imagine it as a role-playing game campaign using Cubicle 7's Doctor Who RPG. (Go back one, to Season 23.) 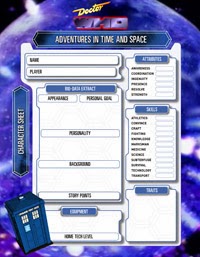 When Eric left the RPG club in a huff, the club manager gave its longest-running campaign to Andrew, and embittered by the whole debacle, vowed not to interfere with it again. As GM, Andrew would take inspiration from his first love, British comics like 2000 A.D., and bring more whimsy, satire and craziness to the proceedings. while not ignoring what had gone before.

The Characters
-The passing of the torch did cause one major misunderstanding. When Eric gave Andrew his campaign notes, he was under the impression Colin would be leaving too, so Andrew went and found a new Time Lord player. When Colin heard about the game starting back, but that he hadn't been invited, he put in a rather peeved call to club manager John-Nathan and was informed of the situation. Having already decided not to interfere with others' campaigns anymore, J-N was reluctant to suddenly oust the new player and force Andrew to scrap the plans he'd made with him. After discussion, Andrew was willing to give Colin one last adventure in which his Doctor would be put to rest, but Colin refused. He would later regret having made decisions out of anger, but the way he'd been treated made him leave the club after all. Eric's had been a self-fulfilling prophecy. To this day, the two gamers still do not speak.
-Andrew's new Doctor is Sylvester who wants to play the character as a bit of a clown, hiding his genius behind pratfalls, bad puns and bat tricks. Throughout his first season, he'll really be looking for a comfortable performance that doesn't annoy everyone at the table and doesn't become tiresome to himself. The clownishness thus calms down over time.
-Bonnie is still in the game and having a good time, not having played long enough with Colin to feel like she should quit out of solidarity. She bolsters such skills as Mel's Science and Fighting, but otherwise plays her character with the same mix of perkiness and screaming.

Time and the Rani. Andrew's first effort draws on the campaign's store of old villains, giving the Rani an incredible plot that includes an enslaved race, bat-like henchmen, kidnapped geniuses from Earth's history, a giant brain, a strange matter asteroid, and a planet-sized time manipulator that would give her control of history. It's comic book stuff, go big or go home. Sylvester also agrees to let the Rani pose as Mel for a while and trick him, accumulating Story Points he later spends on confounding the giant brain with malapropisms he came up with in advance or on the spot (this turns out to be so difficult to sustain, he stops doing it by the next scenario). 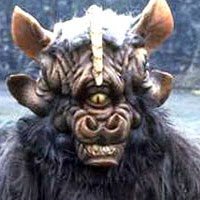 Paradise Towers. Andrew's second adventure module takes an old J.G. Ballard novel (High Rise) and runs it through a Judge Dredd filter to come up with a killer apartment building dystopia with cannibal grannies, color-coded girl gangs, and fascist by-the-book guards. He plays up the comedy and satire, which naturally makes the Doctor more stable and serious, though no less fun to play for Sylv. Bonnie is offered the chance to out-hero the environment's "hero", but falls to the usual screaming. I guess she doesn't get what the GM's trying to do, and tells him she'll leave as soon as he finds a replacement. Andrew decides to audition a few players/characters over the coming games.

Delta and the Bannermen. Andrew's next romp makes his intent more clear and this time Bonnie does get into the spirit of things. Games don't have to be so serious or follow the same formulas, go with the flow. The GM provides a fun rock'n'roll soundtrack for this 1950s escapade, as the Doctor and Mel - and guest player Sara with her biker chick character Ray - help an alien princess escape genocidal mercenaries at and around a Welsh holiday camp. If Andrew has a GMing weakness, it's introducing quirky characters that then have scenes between themselves. When he realizes he's turning his players into spectators, he tries to steer those characters towards the players. Though Sara is invited to stick around (to replace Bonnie), she declines the invitation. Bonnie sticks around.

Dragonfire. In this module, the TARDISeers land on Iceworld, where a frozen vampire rules and a dragon is rumored to protect treasure down in the ice tunnels. This time, Sophie's trying out with her character of Ace, a troubled youth from 80s Earth and explosives expert who, because the Iceworld adventure was already written, somehow found herself there. The GM decides, uhm, time storm, yeah that works. Sophie and Sylv immediately click, and Bonnie starts to take a step back, finally leaving at the end by whatever means necessary. Though the Doctor could have brought Mel home, Bonnie doesn't believe she would stop adventuring after her tour of duty in the campaign. She opts to have Mel follow guest-character Sabalom Glitz (another character that piqued Andrew's interest in the campaign notes and one Mel had met) through space. She leaves the game knowing it's in good hands. 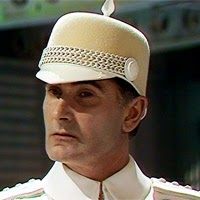 Sophie, Sylvester and Andrew... a new dream team? Only time will tell!
Doctor Who RPGs Seasons of DWAITAS