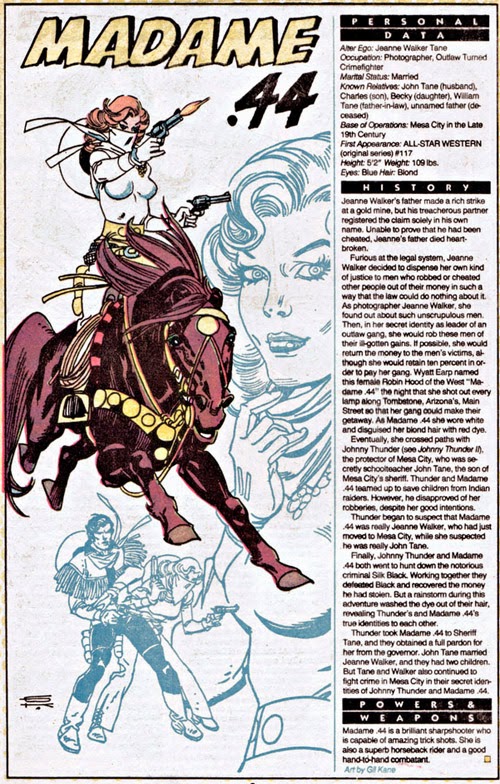 The facts: Madame .44 appeared at the tail end of the original run of All-Star Western, appearing the last three issues (117-119) in Johnny Thunder's strip. Then nothing until "Whatever Happened to Johnny Thunder?" in DC Comics Presents #28 (1980) where it was revealed the two married and had kids.
How you could have heard of her: When Alec Holland went traveling through time, he did meet Madame .44  and Johnny Thunder (Swamp Thing #85). Her last hurrah was a cameo in Infinite Crisis.
Example story: All-Star Western #118 (1961) by Gardner Fox, Gil Kane and Joe Giella 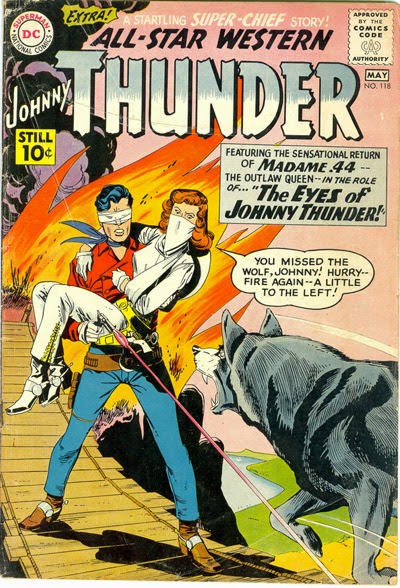 So Part 2 of 3 in the great Madame .44 story starts with John Tane repairing chairs in his school house when he hears shots fired in the street, so he quickly changes into Johnny Thunder (cowboy outfit, shoe polish in his blond hair) and springs into action. But it isn't an OK Corral situation exactly... 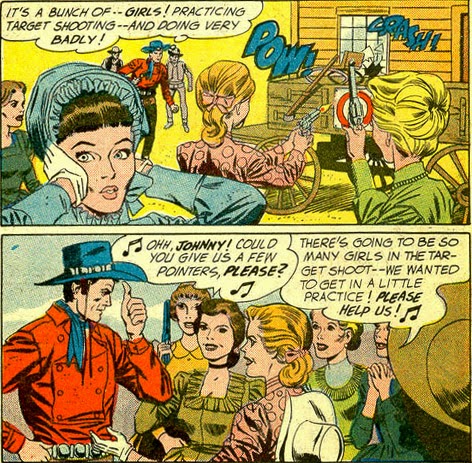 Girls? Shooting guns?! Ok, let's backtrack a little. See, in the previous issue, Johnny met Madame .44, a masked female western Robin Hood who steals only from crooks and swindlers. Since then, Johnny has been a little obsessed with getting a date with her. Ergo the Silver Age plan to attract her to Mesa City: 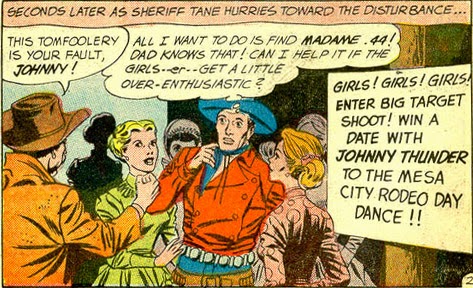 Johnny is such a heartthrob that it's making all the girls in town pick up an iron (I mean a gun, not a shirt flattener) and trying out. But Madame .44 robs a stagecoach while Johnny's judging the contest, so she can't be in the group! Oops! It's off to track her down before announcing the winner, and he catches up to her in a deserted stagecoach relay station where after giving her men their cut, they pull guns on her for wanting to give most of the loot back to the miners that got swindled out of it. Oh Johnny, my hero.

But in the ensuing gun/fist fight, Madame .44 is shot i the gun arm and (because she's a 1960s heroine) twists her ankle. (No really, I'm asking. Was their something dreadfully wrong with women's ankles back then?) Johnny puts her arm in a sling BEFORE attempting to unmask her (how gallant), but doesn't get a chance when the outlaws wake up and blow up a powder keg right in his face! He's blinded!

So now they must build trust and depend on each other to escape the bad guys. One can't see, the other can't hold up a gun or walk! And to hide their tracks, they even let their horses go. Cue the cover, with a blind Johnny walking on a rickety rope bridge towards a timber wolf. .44 tells him where to shoot, but the dead wolf gets in their way and the topple off the bridge. 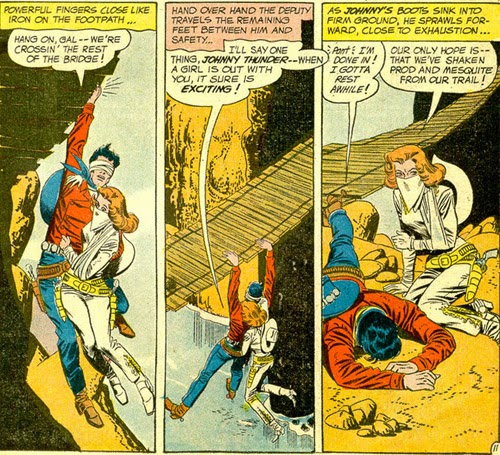 Well at least she's having a good time on their date. Cue the outlaws who saw the whole thing and start shooting at them. Johnny and Madame .44 lay a trap that involves her pointing his gun at just the right spot and throwing a pebble in his direction at just the right moment. 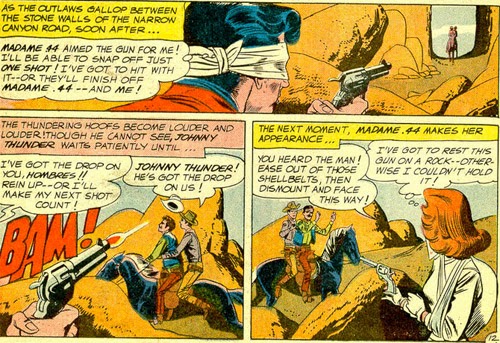 Right in the hat! These guys are really good at what they do, what I can I say? And natural partners. It's love! 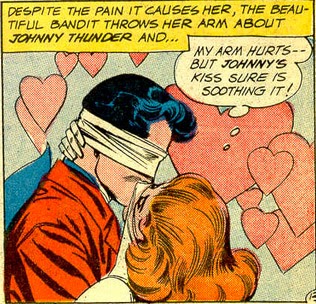 The outlaws get put in jail, Madame .44 stays on the run and Johnny's eyes get better. Oh yeah, one last thing, who wins the lady shooting competition AND a date with Johnny? That would be Mary Jane Thomson, but will her thunder get stolen (literally) when photographer Jeanne Walker rides into town demanding a photo date with Johnny? 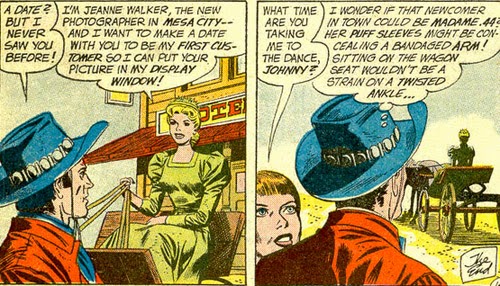 Spoiler: Yes it will.

Who else? Maaldor the Darklord could have made it, but his whole story's pretty much told on his Who's Who page. Fantasy strip supporting players don't usually make the cut, so that's Machiste. No, next up is someone who associated with all the right people to become a star, yet didn't.
Comics Silver Age Who's This?

LiamKav said…
"Did they make that tight of a shirt in the old west?"

Never mind the old west. You show me any shift tight enough to completely follow the outline of two individual breats without squashing them.

Comic artist pet peave no 1: If an item is made tight enough to outline a persons body, the boobs are probably going to get a bit squashed, rather than jutting out with the material flowing tightly both on the top, bottom and sides of the breeats.

Siskoid said…
You'd think Gil Kane would know better. His vintage work has much more acceptable cloth on skin than the later Who's Who entry.
October 16, 2013 at 1:14 PM

Anonymous said…
You don't understand...without nipples, boobs would be pointless! Not many buy comics to see if the clothes drape right!
Sex sells...always has.
---s
January 21, 2015 at 6:08 AM