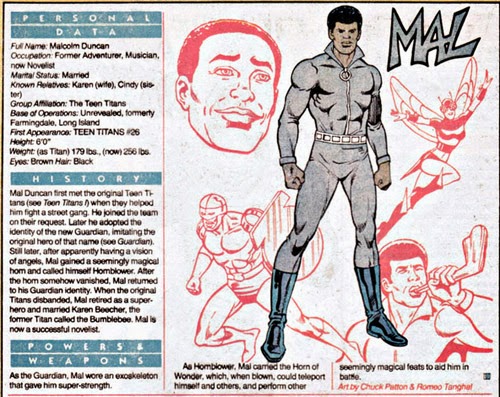 The facts: Well, the Titans who debuted in the 70s and didn't make it to NEW Teen Titans are very much underrepresented in Who's Who. Mal Duncan premiered in Teen Titans #26 (1970), one of DC's first black superheroes, but though he was invited to join the Titans after saving their lives, he didn't have any super abilities until Teen Titans #44 (1976), where he found an exoskeleton and became the second Guardian. I guess that was an on-again, off-again thing, because in the very next issue, he's instead using a magic horn as Hornblower. After these few attempts at giving Mal something to do, he left the team to become a novelist and a husband to another forgotten Titan, Bumblebee.
How you could have heard of him: Well, despite my thinking of him as an obscure 70s character, he did make a number of appearances in post-Crisis continuity, though Secret Origins Annual #3 made it clear he was never Guardian (the African-American Guardian of the 7 Soldiers of Victory is presumably a tribute to Mal's short time in the role), and that he used the less risible name Herald instead of Hornblower. As Herald, he was a member of Titans West (or equivalent) and saw action in the mid-2000s, and after 52/One Year Later, joins a new Doom Patrol. He's also enjoyed appearances in various cartoon shows.
Example story: Teen Titans vol.1 #45 (1976) by Bob Rozakis, Irv Novick and Vince Colletta 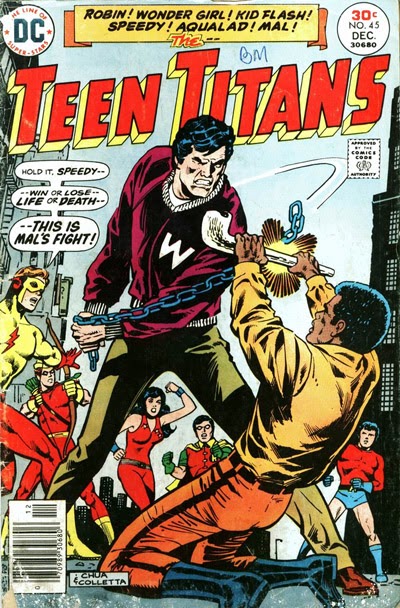 We're picking up right where the previous issue left off, with Mal taking off the Guardian exoskeleton and Speedy making cracks about Mal being a second-rate hero. 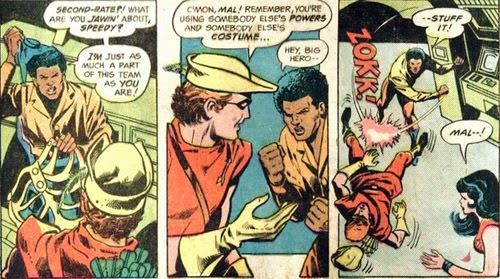 Dude, like YOU'RE not a derivative character. In fact, isn't that what the Teen Titans were ALL ABOUT back then? It's a joke, I get it, but Mal may well quit over this. At least, that's what he tells his girlfriend Karen. 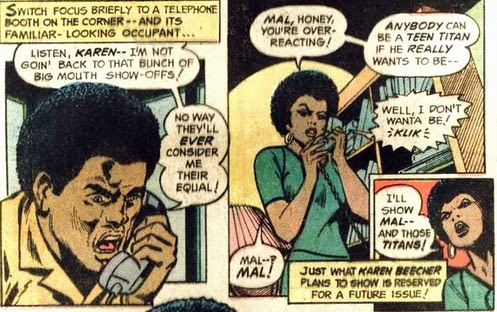 Yep, that's the Secret Origin of Bumblebee! Anyway, to take our minds off Mal's young adult angst, we're shown a Gotham City street gang, the Wreckers, who were tight 15 years ago. While most of them stayed on Colmont Street and pursued various professions there, their leader joined the military and was drummed out for playing with explosives. When he came back from Vietnam, he found his old street slated for demolition for the construction of deluxe apartment complexes (by, among other developers, the Wayne Foundation!), and brings the old gang back together to scare off the new proprietors. That's when Mal comes back into the story, falling prey to one of the Wreckers' bombs, destroying a nearby building. Very close to death, he has a meeting with Azrael the Angel of Death who offers him a deal: Win a boxing match against him and live! 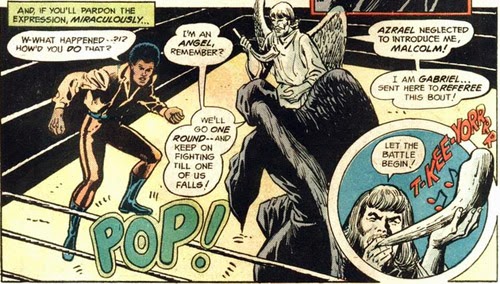 That's the angel Gabriel (who artificially inseminated the Virgin Mary, in case your catechism is a little rusty) playing referee. Mal wins, displaying surprising strength, and an angry Azrael vows that he will take Mal's life if he ever loses a fight against ANYONE. Gabriel bestows his holy horn to Mal, telling him he need only blow it to even the odds in any fight (looks like Mal had help from Gabe's blow in the ring - it's all going to sound wrong, I'm sorry - which is how he won so easily against Az). Meanwhile, everybody's bitching out Speedy for being a jerk to Mal, so Speedy quits the team too. So Robin gets all passive-aggressive.

Next time somebody wonders whose idea it was to put Titans Tower on an island close to Manhattan should look no further than the above panel. No, that's not where they landed in the next issue, but she sewed the seed. But no one has time to tell Donna just how impractical her idea is that they're all teleported to Mal's side. Wanting to stop the Wreckers from getting to their next targets, he's blown his horn and it has summoned them to "even the odds". All of them. Even Speedy. And Mal's pretty cool about saying he WANTS Speedy on his team. Of course, Speedy can't possibly be gracious about this:

Dude, give the guy a break. Robin, Aqualad and Kid-Flash head to the Wayne Foundation and prevent it from being blown up, but are knocked out by the exploding bomb after Kid-Flash throws it away. Back on Colmont Street, the other heroes are ambushed by an automated machine gun nest left by the Wreckers. 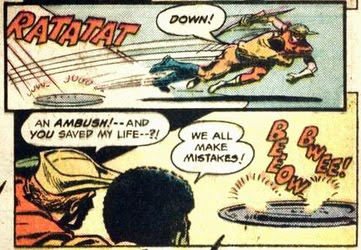 He he he, don't let him off the hook, Mal. Speedy disarms the nest with his arrows, but they get more than they bargained for when the Wreckers arrive en masse. Mal blows his horn again and the unconscious Titans are revived and teleported to his location. A big fight ensues, with Azrael looming behind Mal to see if he'll lose. Long story short, he doesn't.

That's a pretty cool move, almost symbolic. When the Titans turn around to inspect the damage done by the Wreckers' grenades, they find the street demolished, saving the Wayne Foundation a lot of time and money, I'm sure. IRONIC!!! But what about the REAL story? No one cares about the Wreckers, do they? No, it's the Speedy/Mal bromance that's at the heart of this. Well... 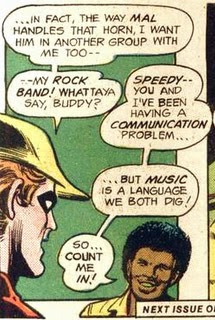 Not only do they make up (because Mal has a "power" now, not because of any inherent value he might have even though he joined, like, 19 issues ago!), but Speedy asks Mal to be in his rock band! Where he's supposed to play an ancient horn?! Remind me not to buy that album!

Who else? Well, I think I might revisit the Golden Age next...
Comics Teen Titans Who's This?

Calamity Jon said…
Mal's one of my favorites, despite (or maybe because of) his Z-Level status.

I've got a redesign around here somewhere merging his Herald and Guardian costumes together, with a nod towards the H-Dial mythos too (In the redesign, Mal's horn is the musical equivalent of the HERO dial, with its buttons reading H-E-R-A-L-D)...
October 17, 2013 at 1:00 PM

Siskoid said…
I'd love to see it!

I was fascinated by Titans West as depicted in Secret Origins, a pool of characters that DC pretty much ignored, though I admit I haven't read more than a couple issues of any Titans book since the late 90s (if not longer).
October 17, 2013 at 3:46 PM

American Hawkman said…
I'm a little shocked, honestly, that Mal made this feature since he even got a spotlight episode in the recent Young Justice cartoon, which had him becoming the new Guardian to take down Despero. I also thought that they'd changed his name yet again to Vox post-Infinite Crisis. (As a callback to the character by that name who opposed the original Doom Patrol and the Metal Men once.) Either way, I'm a fan of the character. Wasn't there some talk of having him become the original Jericho once upon a time before the end of the original volume of Teen Titans?
October 17, 2013 at 6:28 PM

Siskoid said…
The reason is simple: I've never seen a single episode of Young Justice (I plan to,I plan to).

So I was mostly going by the fact Mal was fairly forgotten when the issue of Who's Who came out, and besides, my dream is to one day have one of these for every single character.

I've never heard the Jericho story, but the name is a lot more natural for a character carrying an ancient Judaic horn than it is on, well, ANYONE ELSE. Another crime to lay at Jericho's feet, stealing another guy's potential name.
October 17, 2013 at 6:39 PM

Times like this I wish I could send you my DVR... I still have the entire series saved to it until I can budget for the DVDs. Where else are you going to get Rob Lowe as Billy Batson? :)

At any rate, I'll have to agree about the Jericho name. It's a good codename for "guy with horn", moreso than the others. I actually liked Mal as Guardian, not the least reason being that the name set him up for some conflict with Roy Harper for stealing his Uncle's codename. While I'm thinking of it, it's interesting to me that Mal's Hornblower powers are essentially the same as Tyroc's. I have to wonder if there's a tie somewhere there.
October 17, 2013 at 10:58 PM

Calamity Jon said…
Haha, speaking of Mal and Tyroc, if I may nerd out again, I tied the two of them together in a doodle I posted to Tumblr: http://calamityjonsaveus.tumblr.com/post/62417624788/that-drawing-on-the-top-is-a-sketch-gone-wrong
October 18, 2013 at 1:00 PM

American Hawkman said…
Didn't the post-CRISIS retelling of Mal's origin tie him into the whole Mr. Stikk/Gargoyle business as well?
October 18, 2013 at 4:57 PM

Randomnerd said…
I LOVE this! Thank you so much! The first introduction I had to Mal and Karen was the Wedding of Donna Troy issue of The New Teen Titans. They were guests, of course, and at one point Tula and Garth ask if they want to set up Titan's West again. If I'm remembering it right, they both decline, saying their lives are pretty much too stable outside of the superhero business. At the tender young age of (not going to tell you) I had no idea who these people were invading my Titans and referencing HISTORY. So I had to find out. I loved Mal and Karen, a couple of superheros who were a couple. And those past issues just reinforced to me that Speedy had always been something of a hard case, and Dick could be a loner bent on drama before he changed into Nightwing. And thanks to my friend karl for tipping me off that you had done this. :)
October 18, 2013 at 8:08 PM

Random: Karl's good people. I knew next to nothing of the Titans' 70s stuff before attempting the post (I read the New TT stuff in the 80s like everyone else, and am a big fan of the 60s stuff, which I covered often in the early days of this blog), so it was very interesting to me too.
October 19, 2013 at 9:44 AM