October 22, 2013
Who's This? Donald "Dan" Richards was chronologically the first Manhunter, as shown in Who's Who vol.XIV, page 18. 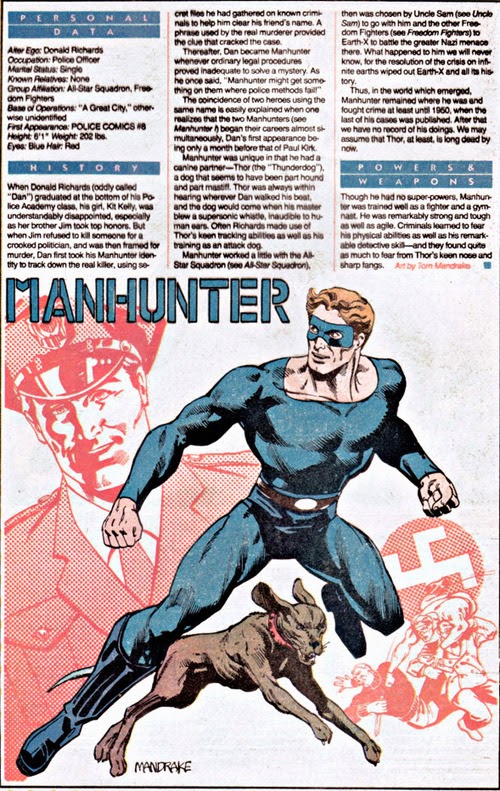 The facts: While DC would also publish a Manhunter strip during the Golden Age (starring Paul Kirk), Dan Richards was Quality Comics' version. He appeared in Police Comics, from #8 to #101, going from what was usually a 10-page second feature to the book's 4 last pages during his run from 1942 and 1950.
How you could have heard of him: Seeing as he's a Manhunter, it was almost inevitable that he'd feature in Millennium (where it was decided his dog was a robot Manhunter agent), in that book's second issue Infinity Inc. #46-47 (and 52), and in the Millennium-centric Secret Origins #22. Roy Thomas also used him in All-Star Squadron and Young All-Stars a number of times. Most recently, he's appeared in Marc Andreyko's Manhunter series where Kate Spencer's son inherited Thor the robot dog! He was killed by Mark Shaw (Manhunter III) using the Dumas persona.
Example story: Police Comics #17 (1943) 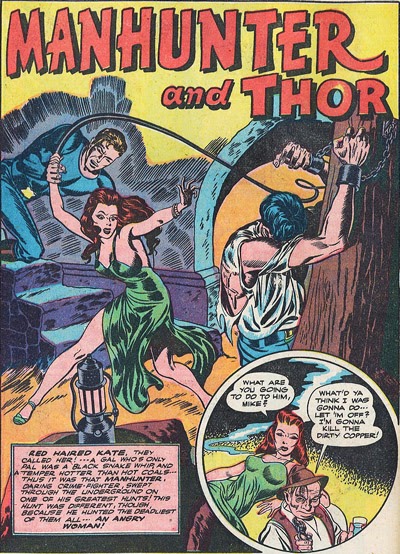 Right away, what's amazing is that Thor the Thunderdog gets billing on the strip (it wasn't always this way), and he'll earn it too. The villain of our piece is Red Haired Kate, Queen of Gangland, who's really handy with a whip. It's very strange, but the story continues right from that splash page, but Manhunter isn't actually in the room. Cool effect, actually. The guy getting whipped there is a captured cop, which Kate's goon Mike shoots much to her dismay. She's into kink and a sadist, sure, but murder? No, sir. Well, unless, like Mike, you disappoint her.

Yes, THAT. Bear in mind this was published right alongside light-hearted fare like Plastic Man! 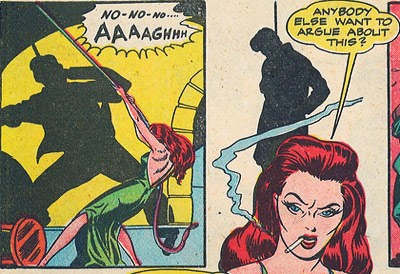 No ma'am! That's fine! You did what anyone would have done. SHOULD have done! Gulp! Next on the bucket list, an armored truck robbery. What Kate doesn't count on is rookie cop Dan Richards (Manhunter) guarding the truck, and as soon as she attacks, he gets into costume and calls his dog, always lurking around the corner! 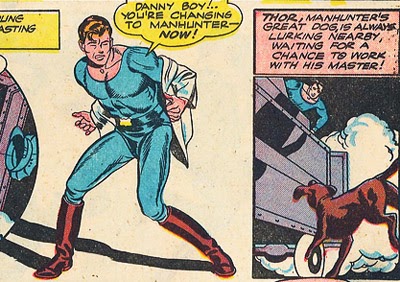 Man, that doesn't sound like a great life for a dog. "No, Thor. You can't be with Master now. You have to stay out of sight until Master calls you and by the way, that will mean our lives will be in danger." So Manhunter starts punching dudes, like you do, but neglects the real baddie, WHO WON'T BE IGNORED!

Thor, by the way, is the most terrifying dog this side of Cujo. 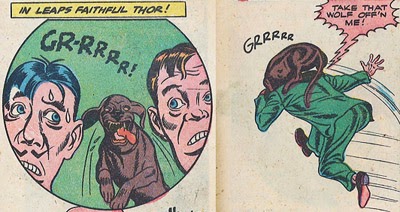 Manhunter gets out of the tangle, and ripostes!

Of COURSE Kate is going to fall for him. That's what villainesses did in the Golden and Silver Ages. Because women only think with their hearts. Even evil ones. Dare Manhunter resist her advances? Well, he's not called Womanhunter, if you know what I mean. (Wait, what DO I mean?) He gets slapped for his trouble, but is then distracted by a gunshot. 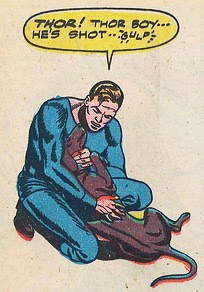 Thor! NOooooooooooooooooooo!!! Who shoots a dog?! So this positively means he can't be a Manhunter robot, right? After he's put his pup under a blanket, Manhunter returns to find the other cops knocked out and gets captured (and slapped around again) by Kate. Then he's brought back to her hide-out where she whips him some. Young love! All the cracks attract an unlikely savior:

So that proves conclusively that Thor IS a Manhunter robot, right? Right?! That's one tough canine! Manhunter uses the commotion to get himself loose, beats all of Kate's men up and threatens her with his growling mongrel. Her reaction? 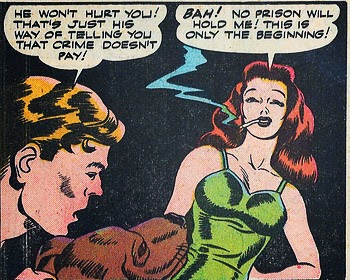 Light up a smoke. She promises to break out and plague Manhunter again. As far as I know, she never did. But full points for arrogance.

So what this old Manhunter strip any good? Well, I wouldn't call it amazing, but it had shocking Golden Age violence and dynamic fight scenes. And a crime-fighting dog. Let's not forget this same issue would also have given you Plastic Man, the Human Bomb, Destiny and Phantom Lady!

Who else? There's an awful lot of sword&sorcery half-pagers in this volume - Malagigi, Mara, Mariah - but I've no interest in covering them at this juncture. No, next up, I think, is a Bronze Age villain that never got a post-Crisis shot.
Comics Golden Age Who's This?

I like Dan Richards quite a bit, and hated the arc that decided to kill him off needlessly. (At least Kirk DePaul managed to come back from it.) I still love the fact that his dog living to be in his 40s never clued him into something being strange. :)
October 22, 2013 at 7:41 AM

Siskoid said…
Or that Thor can recover from gunshot wounds that quickly.

Siskoid said…
Maybe not, but the story in this issue, as well as the Human Bomb's, is quite cartoony in its approach the violence.
October 22, 2013 at 2:53 PM

Steve Flanagan said…
I'm really enjoying this series - you're bringing to life lots of characters I only know from their Who's Who entries.

But not this time, for a change. I've just read 60 issues of Police Comics back to back, and I have to say you've managed to find one of the few entertaining "Manhunter" stories in any of them! Usually they are pretty dull things, with artwork that is uncharacteristically stiff and simplistic for Quality.

"Plastic Man" is pretty much out-and-out comedy in all of them, and "The Human Bomb" rapidly became so - it's more about supposed light relief sidekick Hustace Throckmorton than the title character most of the time.The difference is that "Plastic Man" is actually funny, even now, while the appeal of Hustace's exploding feet fades rapidly.

But who is this "Dumas persona" of which you write? Are you saying that "The Three Musketeers" was written by a robot from outer space?
October 22, 2013 at 3:26 PM

Siskoid said…
I guess I lucked out!

Dumas was the villain from the first arc of the Mark Shaw Manhunter series, and through some convoluted story telling, Shaw ended up taking that guise to assassinate past Manhunters in the Kate Spencer series.

Then again, Alexandre Dumas MIGHT have been a space robot judging from word count alone.
October 22, 2013 at 3:35 PM