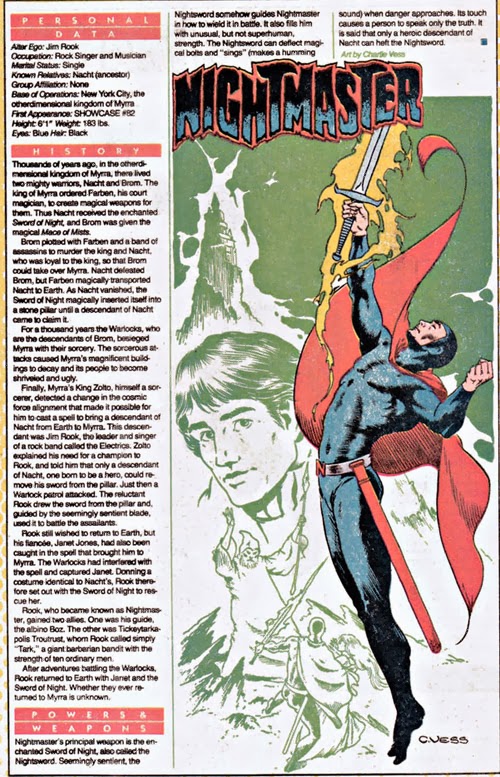 The facts: While people have resented the fact that an obscure genre character like Nightmaster would get an entry (and a gorgeous one by Charles Vess, no less) in Who's Who, he has historical value as DC's first sword & sorcery strip, and a little ahead of its time. The fantasy boom of the 70s was still a couple years ahead, and the Wagnerian iconography and Jim Rook's true identity as a rock musician seems to prefigure countless metal albums. Before appearing in Who's Who, the character appeared in exactly three issues of Showcase, telling a complete story from #82 to 84, back in 1969. Denny O'Neil and Jerry Grandenetti created him, but Bernie Wrightson took over on art with the second issue, and looking at it now, one can see why Vess was tapped to draw his entry.
How you could have heard of him: After Who's Who, Nightmaster made a few cameo appearances, trading on his obscurity, and more weighty appearances in Primal Force and Swamp Thing in the mid-90s. Of course, modern readers know him as a member of Shadowpact, the Oblivion Bar they worked out of actually named after the old store, Oblivion Inc., that served as a doorway to the fantastical world of Myrra.
Example story: Showcase #83 (1969) 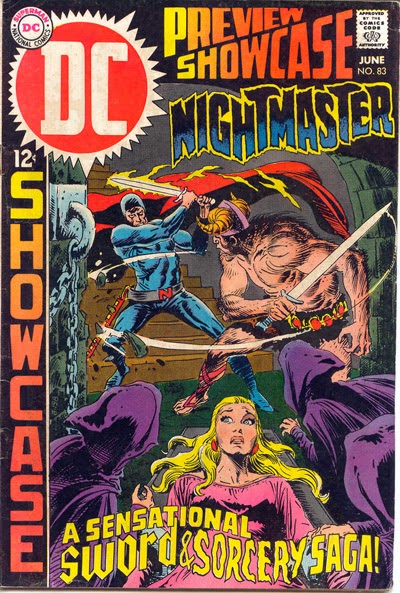 A cover by Joe Kubert? Yes please. So this is the second chapter of a three-issue story, but it does feature a lengthy recap of what happened before. Jim Rook and his fiancée Janet walk into an old bookstore and... vanish!

And it's all written in the second person, which I hate with a passion because, no, no, Mr. O'Neil, I am NOT Jim Rook and I don't want to be. So it's down the rabbit hole they go and to the fantastical world of Myrra where Janet is promptly captured by the evil Warlocks, and Jim discovers his true destiny as the long-lost descendant of a great Myrran hero, and sole heir to a magical sword that does the fighting for him. Think Stormbringer from Elric, with less soul-sucking. Also, think Thomas Covenant for the man of our world taken to a fantasy world - Jim's hip 60s lingo is unpleasantly at odds with the visuals - though the trope is a lot older (John Carter, Alice in Wonderland, The Wizard of Oz, Gulliver's Travels, name it). And you might as well think of Fafhrd and the Gray Mouser because Nightmaster's companions definitely fit the physical profile. But I'm getting a bit ahead of myself, he hasn't yet recruited Tickeytakapolis Trootrust (oh boy) to his cause. He's still fighting the barbarian from Szasz (no relation). 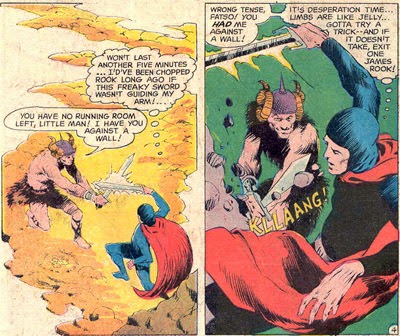 Everybody hates the Warlocks, so Tark is in, as are his two siren girlfriends, whose voices were stolen by Myrra's sorcerous douchebags.

Despite Jim's 60s sexism, Tark isn't afraid to let another man see him cry. Could Myrra be more enlightened than our own world? The heroes walk into a Warlock town/fortress for some buze-berry ale, sturdy wenches and local gossip: 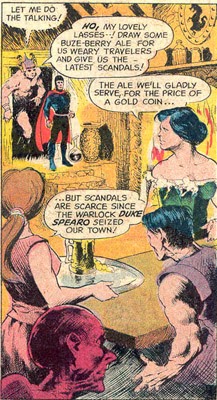 Duke Spearo, eh? I sure hope he has a spear! (Spoiler: He does.) He also has Janet! But before Nightmaster can get to her, he's got to fight off Warlock troopers. Or let his sword do it. 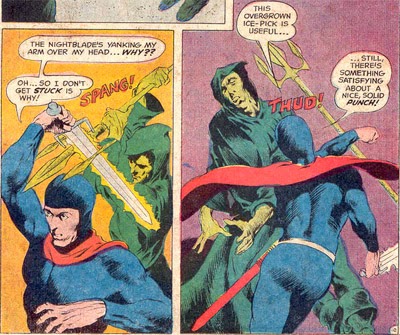 Later that night, they sneak into Spearo's compound and find the sirens' voices in a locked box, but don't open it because the singing would alert the guards. Spearo is about to take Janet to the boss in his moonship (it floats in the air on moonbeams) so she can be coerced into betraying Earth. She might just do that by accident though: 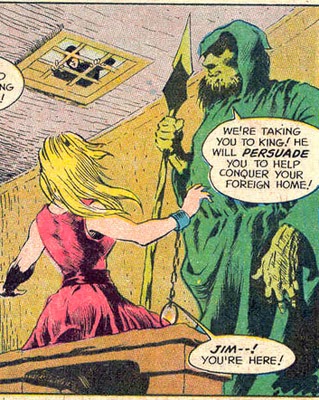 Spearo sics suits of armor animated by the souls of dead Warlocks on them and fighting ensues. 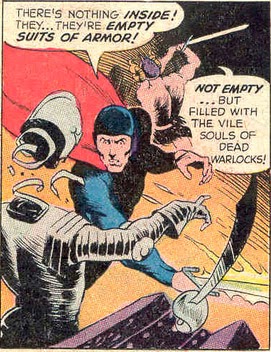 Unfortunately, they fall overboard during the fray and are only saved by one of the sirens, Doe or Rae (yeah, I know), opening the box, getting her voice back, and creating a path down from solid sound, because they were thankfully over Melody Chasm. 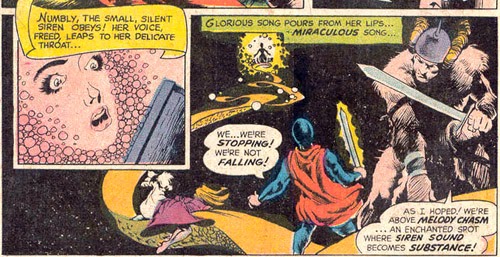 Tell me this whole story wouldn't work better as a rock opera? Nightmaster lingers on the sound bridge (ROCK. OPERA.) to fight one last guy and the siren sneezes, sending Jim spinning to his death. Not even his sword can get him out of this one! 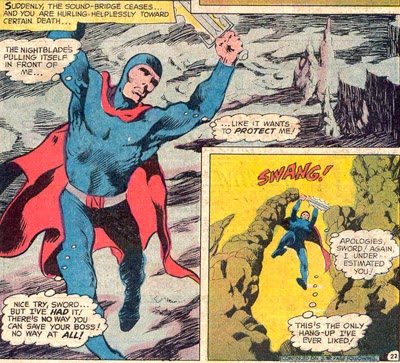 Wanna bet? Elric would be jealous. So that's the end of the issue, with the moonship escaping and the quest just starting. Actually, there's a map of Myrra included. 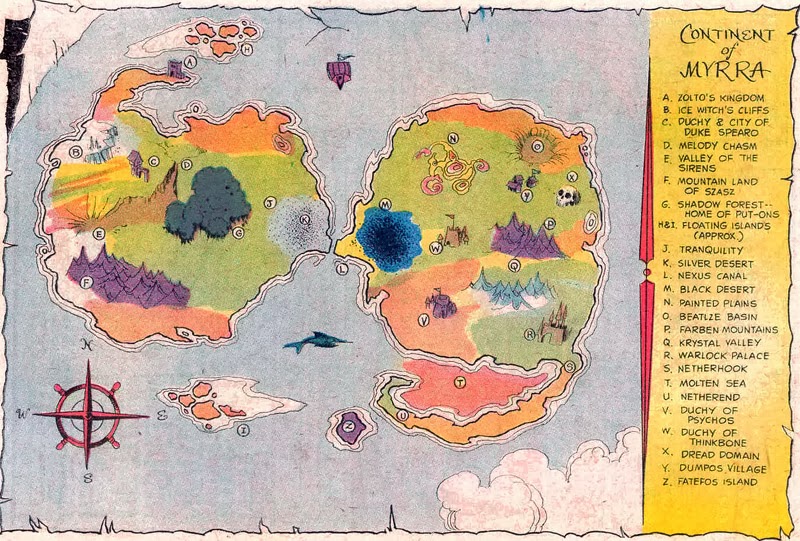 Lands never fully explored. Watch for the MMO, probably around the same time the hit Broadway musical comes out.

Who else? The New Olympians aren't big names, but my next Outsiders posts will talk about them at length. Night and Fog were minor All-Star Squadron villains that were fairly recent when Who's Who came out. No, I think Nightmaster rounded out vol.16 well enough. It's on to the next issue...
Comics Who's This?

Doc Savage said…
Now we know where Jay McInerney stole his famous 2nd person narration from!
January 30, 2014 at 11:12 AM

Siskoid said…
It probably predates this comic, but I do remember guys like O'Neil and Wolfman using this type of narration from time to time. Tomb of Dracula was a chore to read because if it.

Doc Savage said…
Yeah but McInerney got a Michael J Fox movie, can those others say the same?