March 10, 2014
On the occasion of completing reviews on Sarah Jane Adventures' third series, I should like to re-imagine it as a role-playing game campaign using Cubicle 7's Doctor Who RPG. (Go back one, to Torchwood Series 3.) 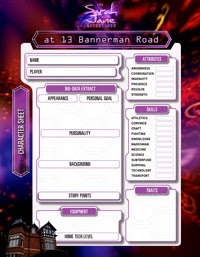 The GM
Phil's strategy for his second full campaign is pretty much the same as for his first. Lis is his star player and best partner, easily able to take a back seat in a game so younger players can better shine and learn to love role-playing and blossom into good, resourceful players. He brings back aliens from the mega-campaign's library, and creates new threats he thinks he might use again some day. And the Pharos Institute becomes a good excuse for many of his plots. Business as usual, but it's business that's proved profitable before.

The Players
-Lis is happy to give the kids a lot of room, and allows Sarah Jane to get taken out of the equation on occasion, but she usually trades that sacrifice in for a big storyline. This year, she asks the GM for a romance, knowing full well it'll all go wrong, and Phil obliges her.
-Tommy wants to start giving Luke flaws, taking him away from perfect son/human computer to more normal, rebellious teenager.
-Daniel really hopes to use the points he's dumped in Clyde's Craft as his particular niche, and the GM writes a scenario around his art!
-Anjli is actually the first to attempt a teenage rebellion subplot (with Rani), but they'll take a turn disobeying Sarah Jane in time.
-Lis' old friend John, who plays K9 the tin dog, agrees to come back and play a few games with her and the kids. His idea is to verbally spar with Mr. Smith (played by the GM) and create amusing trouble whenever possible to make the kids "pay" for the dog's super-Traits.

Prisoner of the Judoon. Phil creates a "destroy of worlds" called Androvax as a pretext for giving his players a difficult-to-control Judoon ally. At one point, Sarah Jane is possessed by Androvax and gets a shot at playing the villain. The kids are spooked by how creepy she makes that evil persona. 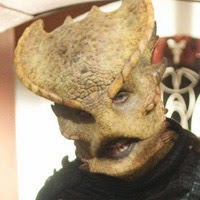 The Mad Woman in the Attic. In DWAITAS, a GM should expect the unexpected. Phil had prepped a scenario about a young time-sensitive alien taking over an amusement park, but he didn't expect Rani to run off and try to investigate it herself. He quickly jumped on the theme, however, and made an thoughtless comment from Anjli about wishing Sarah Jane and the boys would leave her alone into an alternate future. Rani is shown this future and it later comes to pass. The GM stages a scene in that future for an older Rani, visited by a sequel to the present-day scenario that sets things right and gives her a chance to imagine a better future for them all. The team frees K9 from his black hole duties in the climax, to prepare the way for John's return.

The Wedding of Sarah Jane Smith. Lis' request for a love interest spawns a scenario about a dead man given a second chance by her archenemy, the Trickster, and as a special treat, David shows up to play the Doctor! He's soon to give the reigns of his character over to a new player, so he really wanted to play one last game with Lis and John, with whom he'd once shared the gaming table. Still, he knew this campaign was about mentoring younger players, so gives them them and Lis the tools necessary to defeat the Trickster, but doesn't save the day himself. The kids have fun, Lis takes it to a dramatic place, a good experience even if David is largely slumming it.

The Eternity Trap. The GM writes a haunted house mystery for the group, which works out even though neither John nor Tommy can make it. Knowing in advance (remember kids, always let your GM know if you can't make the game), Phil invites Adam, a new player only slightly older than the other kids in the group, to play a budding paranormal scientist. Adam's Toby Silverman is given more back story than can be explored in a single scenario, but he has fun playing an anti-social "believer" to Sarah Jane's skeptical rationalist. The threat of course turns out to be alien and hyper-dimensional, but that's no reason Phil can't throw all sorts of spooky stuff at the group.

Mona Lisa's Revenge. Another fantastical idea from the GM, the Mona Lisa as a living painting, is something he thinks up in response to Clyde's Craft-related abilities. The excuse is that Clyde wins an art contest that brings the team to a Museum, and in conflict with the famous painting. This is one where Lis takes a definitive back seat to the kids, allowing a role-played parental moment to cause friction between Sarah and Luke. John's not present either, but it doesn't stop the players from having K9 show up, after a fashion (see Mona Lisa's Traits). 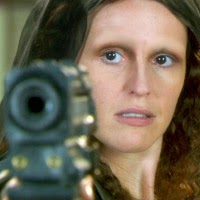 MONA LISA
Attributes: Awareness 5, Coordination 3, Ingenuity 3, Presence 4, Resolve 4, Strength 3
Skills: Convince 3, Fighting 1, Knowledge 3, Marksman 3, Subterfuge 2, Technology 2
Traits: Alien, Dependency (Major; must be in the Abomination's proximity to leave her frame), Keen Senses, Obsession (Major; be reunited with her brother), Special/Paint Power (Mona Lisa can give objects and people painted or drawn three-dimensional physical presence with all the abilities that object or person would really have, or, as an attack, trap real people and objects into paintings), Psychic, Weakness (Major; cracks and starts to deteriorate in direct sunlight). Story Points: 8
Home Tech Level: 6

The Gift. Phil (and Gareth before him) has used the Slitheen as enemies before, and does so again here, but he also introduces the Blathereen, a supposedly friendly family from the same planet. The group is wary of the gift they bring, but end up having fun role-playing a gross dinner scene and are caught out when the gift turns out to be an attack on the planet. Tommy makes the worst rolls of his young career and is bed-ridden for most of a session, but the GM leaves enough clues at the school for Clyde, Rani and K9 to pick up on them in the middle of their "will Clyde cheat on a test" subplot.

Everyone back for another campaign? They say yes, but by the time they get to it, one of them will soon be leaving for university... Stay tuned.
RPGs Sarah Jane Adventures Seasons of DWAITAS