April 07, 2014
On the occasion of completing reviews on the Sarah Jane Adventures' 4th Series, I should like to re-imagine it as a role-playing game campaign using Cubicle 7's Doctor Who RPG. (Go back one, to Doctor Who Series 5.) 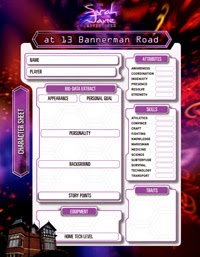 Phil's seeing the kids in his campaign grow up before his very eyes, and he and adult player Lis are keen to give them even more room to grow their characters, take the lead and work things out without any help. Of course, part of that growing up is changing their priorities, so the group loses one player to his studies. There are worst things to abandon gaming for. Phil decides not to replace Tommy, but rather leave a chair free for him should he find the time for a quick game. Otherwise, it's business as usual, except he means to exploit some darker themes now that the junior players are mature enough for them. He's also changed the gaming schedule to accommodate the changes (and certain guest players he has lined up), running the two sessions required of each of his modules on consecutive days instead on once a week.

The Players
-Lis is once again game to take a back seat on occasion to see what the younger players are capable of. And they make her proud. She doesn't even have to appear at the eleventh hour with the quick fix she silently came up with earlier. As usual, Phil proposes a scenario that's attuned to her specific strengths and allows her to roleplay some dramatic situation - it's what she loves even if it's not always possible in the action-adventure format - to keep her happy.
-Tommy's playing a genius, so it seems a natural exit for the character to send him to university early. He promises to play one goodbye adventure module, send a few in-character emails to Lis that can be used in prologues and such, and possibly return for the finale. John is moving and taking K9 with him (be patient, the whole story will one day be told), so they whisk the robot dog off to take care of Luke, and the GM will play him on occasion just like he does Mr. Smith.
-Anjli and Daniel are toying with giving Rani and Daniel a romance (even if they don't share those feelings), but it's a bit awkward, so they keep shying away from really committing to it. Neither adult at the table pushes them; it'll come in its own time (or won't). On paper, they get to add some points, making their characters more capable, smarter, more observant and/or more resolved.

The Nightmare Man. Focusing on Luke, since it'll be Tommy's last game, the GM sends him some disturbing nightmares (an idea based on the fact that Luke doesn't dream, just a touch of color on his character sheet turned into a plot point) created by a Freddy Krueger figure. He creates specific dreams for each of the players and lets them play out until the kids themselves start suggesting ways to end the nightmare. Their solution, completely their own, is the power of friendship, which makes a lot of sense on their last official night together.

The Vault of Secrets. Tommy and John are gone, but the fun isn't. Phil brings back the "Men in Black" he created for that one Tenth Doctor game he ran and pits them against the Ealing group as a threat/potential ally who comes in useful when Androvax returns seeking help, but offering only treachery. The kids' new stats are put to the test and Clyde in particular comes out of it smelling like an action hero. Rani still has stuff to do, like tricking the alien out of her mother. Character improvement pays off! 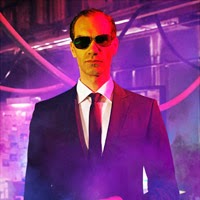 Death of the Doctor. As a treat, Phil invites Matt, currently playing the Doctor, to a game. As a further treat, he also invites Katy, a player from even before Lis' time, to reprise her role as Jo Grant! The two women know each other from the online gaming boards (where Katy still plays Jo, but a Time Lord character as well), but have never played together, nor have they met the new Doctor yet. The conceit is that UNIT calls them in for the Doctor's funeral, which is obviously a hoax. They're still surprised when Matt walks through the door at the end of the first session, and as often happens in "reunion games", it all ends with the older players recounting old games to thrill the younger ones. 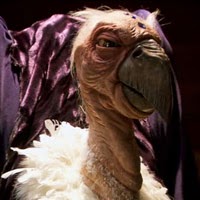 The Empty Planet. Lis takes a back seat when everyone on Earth disappears except Clyde and Rani (and one other kid they find), but she loves to watch them work this puzzle out, which they do, though not without some frustration. Good thing you can get clues by spending Story Points! After this, the GM instructs them to add "Grounded by the Judoon" to their Special Traits. It evidently does something!

Lost in Time. Something Phil doesn't get to do a whole lot of in this campaign is exploit time travel. So he creates a strange alien who can send people through time portals on missions of dire importance to the Web of Time. Why not? Each player gets their own mini-adventure, and Phil cuts from one to the other before they can get too antsy. Anjli's English history is tested when Rani meets Lady Jane Grey at the very end of her short reign. Daniel finds Clyde in more action-driven territory, fighting Nazis on British soil. And Lis is given a twisty-timey puzzle to solve in a haunted house before children burn to death in the future. In other words, the GM caters to each of their interests as gamers.

Goodbye, Sarah Jane Smith. Written for Lis, this adventure introduces Ruby White, a possible replacement for her played by Julie. She's a friend of the GM's acting like she might join the group. Meanwhile, the Sarah Jane character is bleeding Attribute points for no reason, and everything confirms she's simply fallen ill. Lis revels in this, playing up the direness of her situation, making mistakes on purpose, and eventually leaving everything in Ruby's capable hands. That's when Julie surprises the kids (Lis is a bit wiser than this and was playing along) by curtsying, putting her sheet in front of the GM, and leaving with a grin and  a wink. She was an alien all along! With one session left, Tommy does come back as promised, and finding his game-mum gone, he and the others work hard to get her back. Daniel almost loses his character in the process! In the end, all the bad stuff is reversed, but everyone agrees, quite an exciting finale. 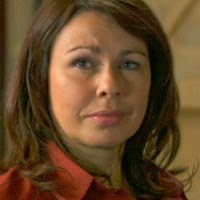 The GM was already working on the next season, but as we'll see, tragedy would strike and leave the campaign without an ending.
RPGs Sarah Jane Adventures Seasons of DWAITAS