May 02, 2014
On the occasion of completing reviews on the Torchwood's 4th series, I should like to re-imagine it as a role-playing game campaign using Cubicle 7's Doctor Who RPG. (Go back one, to Sarah Jane Adventures Season 4.) 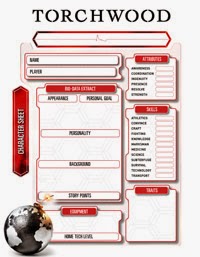 After the success of the longer "Children of Earth" scenario, Russell decides to go for broke and maps out a 10-part mega-adventure for his Torchwood group. Since one of his goals is to get the characters out of Cardiff, and another is integrating a few new American players, much of the action is to take place in the United States, with a finale to take places in several other countries. As with Children of Earth, "Miracle Day" has global implications anyway. The idea is that everyone on Earth becomes incapable of dying, leading to dystopic and conspiracy thriller shenanigans. He's got an idea of what happens to the world during this time and how the PCs might plug into that; the big challenge is actually juggling all those PCs even though they won't actually be together initially.

The Players
-John had sent his character into space, but obviously, he needs to bring Captain Jack back to Earth to participate. He decides Jack now has something of a death wish, but when the GM pulls the Miracle Day trick that takes away Jack's immortality, he soon changes his stance on that!
-Because Gwen would now have her baby, Eve has made her harder, a fierce mama bear. In discussions with the GM, she decides Gwen and her family should be living as recluses because the government was still after Torchwood at the end of the last scenario. This harder Gwen has lost her Code of Conduct.
-Kai has agreed to keep playing Rhys, but won't make it to every session. For that reason, the GM decides to contrive to keep him in Wales even when the other characters get to travel. He's the main reason anyone returns to Wales at all, and why the GM introduces a subplot about Gwen's dad having a heart attack.
-One of three new players, Mekhi creates an abrasive CIA agent called Rex Matheson who, on Miracle Day, is "killed". This was all worked out in advance (without spoiling the fact that everyone on Earth had the same Undying Trait).
-Alexa's character, Esther Drummond, is a CIA analyst who would be very uncomfortable as a field agent. Alexa built the PC from the flaws up, more interested in role-playing than the action bits. She decides she'll have a crush on Rex, and a mentally ill sister, all geared to giving her stuff to do on the phone even if she's basically designed a computer jockey.
-Arlene, for her part, creates Dr. Vera Juarez, the head of surgery at a Washington D.C. hospital, something the GM encouraged because he knew his scenario would have lots to do for such a PC.

The New World. The first chapter is about making Miracle Day happen, seeing where the established characters are now, and meeting the new guys. Arlene quickly shows how sharp she is at figuring out the GM's puzzles and thinking outside the box; the others float on determination mostly, trying to figure out how to get with the Torchwood people as soon as possible. Thrown into the deep end, they soon find out what more experienced players are capable of. Their actions scenes are pretty crazy and set a tone. Russell also introduces Oswald Danes, a distasteful villains the players will follow through news reports and cut scenes. He promises his story will eventually intersect theirs, though it can come off as straight narration for now. 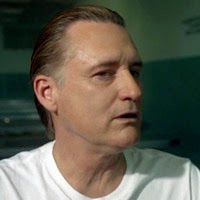 Rendition. The trip to the States is this big set piece aboard a plane. The GM poisons Jack and Gwen and Rex must save her with the help from "phone-a-friend" Vera. Meanwhile, Esther discovers she and Rex are being framed by rogue elements within the CIA. Russell is really raising the stakes and he tells his players in no uncertain terms that none of them are safe (the Miracle merely means there are fates worse than death). He also introduces PR expert Jilly Kitzinger who meets both favored NPC Danes, and Vera.

Dead of Night. Gwen, Jack, Rex and Esther are now a team, and working to track who might have had something to gain from the Miracle. Rex tries to recruit Vera, but only manages to initiate a romance subplot. Arlene is just enjoying her role as a medical panelist too much, there's still a lot of information to glean from that thread, and she gets a chance to influence events on a macro-scale.

Escape to L.A. The trail leads to Los Angeles where the team get to mount a Top Secret-style assault on a high security building. Esther lets her sisterly subplot interfere with the mission, and it almost all goes wrong. If Rex hadn't spent all those Story Points to push himself up those stairs...

The Categories of Life. The GM introduces a shocking element - government-run ovens used to cremate the non-dead. Vera finally joins the team and goes undercover at an "overflow camp" with Rex and Esther and... gets burned alive! The GM doesn't do this lightly. She really does  misgauge the session's villain and the possible consequences of her words. Gwen's subplot with her father kicks into high gear when she realizes he's headed for an oven and she goes back to Wales to rejoin Rhys and try to liberate her dad. Meanwhile, Jack has been having encounters with Danes and here completely fails to "turn" a man who has become a dangerous opinion-maker. 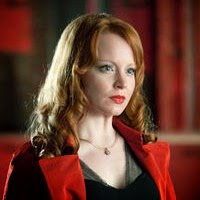 The Middle Men. Rex and Esther have to deal with the previous session's villain even as they work through the shock of losing a player, and Gwen finally succeeds in freeing her father (she destroys the camp's facilities too, because she's badass). The investigative part of the scenario is handled by Jack who discovers PhiCorp isn't the Big Bad. The GM throws out things like the Families and the Blessing, just to whet the players' appetites a bit more.

Immortal Sins. A change of pace. The GM keeps switching back to 1926 and an untold adventure in Jack's long career. He meets a guy, kills an alien parasite, and gets grabbed by people who kill and bleed him repeatedly. It's obviously got something to do with the overall story, but what? In the present, it's all about Gwen delivering Jack to people who have taken her family hostage, while the American characters follow them and ambush the perceived villains.

End of the Road. Even though this is when the GM explains a lot of things the players didn't find out or figure out on their own, he's also forced to reintegrate the CIA into the story when Rex, who's had it in for his old boss since he was betrayed, comes up with a plan to clear his name. Russell admires his cleverness, but uses the opportunity to have Gwen deported by the CIA (because Rhys is due to be available for the last two sessions). The session ends with Esther on the run with a mortally-wounded Jack.

The Gathering. Russell always planned to skip two months in his penultimate session, no matter what. He explains what's happening in the world, and asks his players to describe where they're at. Gwen is hiding her father from the fascist authorities. Esther has nursed Jack back to health. Rex is searching for the Families and the Blessing from CIA HQ, unaware that there's yet another double agent (an analyst the GM had introduced before). Everyone but Rex converge on Gwen's house, including Oswald Danes who forces himself on the team. Rhys is there too, of course, and Kai surprises the group by grabbing a globe from a shelf and figuring out why the others have uncovered clues about Shanghai and Buenos Aires.

The Blood Line. The group splits up for the finale. The Americans go to Buenos Aires and the original team goes to Shanghai (with Rhys holding the fort in Wales). In each city is an access to a strange rift running through the world and in which Jack's immortal blood has been poured, changing the nature of humanity. The players on each end find ways to switch things back, but at a terrible cost. Players who THINK their characters will die: John, Mekhi and Alexa. In the end, the reversed "life pole" means Jack and Rex survive (the latter because the GM thought it would be an amusing consequence of a "yes and" result), but Esther does die. As does NPC Oswald Danes who, as it turns out, was more flavor than necessary plot point. Look, it's not Torchwood unless life is cheap!

While Russell has ideas for the Families' Plan B, a new season has yet to materialize and it looks like the campaign is on indefinite hiatus. No one's fault, just scheduling problems. John went on to play in a DC Heroes campaign, while Russell himself started running a Wizards and Aliens mash-up. They just haven't made time for a Torchwood campaign revival.
RPGs Seasons of DWAITAS Torchwood