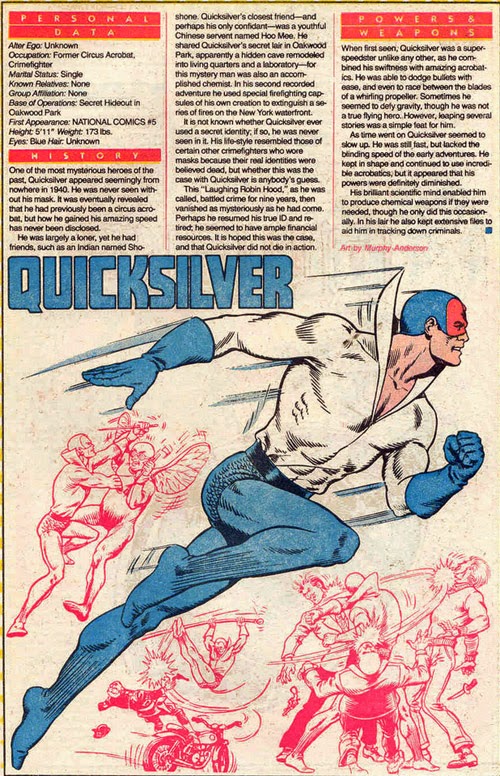 The facts: Quicksilver appeared in a series of 6-pagers from Quality Comics' National Comics (yes, I know, confusing) from #5 (1940) through #73 (1949), missing but one issue during that run. He had superspeed and some acrobatic ability, his first name was Max, and he was friends with a Native American and a Chinese boy. That's about readers at the time would have found out, which makes for a rather mysterious Who's Who entry.
How you could have heard of him: In 1996's Flash #109, Mark Waid reintroduced Quicksilver as Max Mercury, avoiding the confusion with a now better-known Marvel character, and fleshed out his back story based on the few elements revealed in the original comics. Max became a principal player and mentor to both Wally and Bart (in Impulse) for the next 5 years.
Example story: National Comics #11 (1941) by Nick Cardy 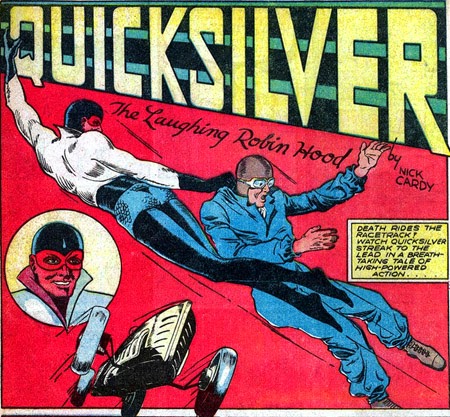 If all Quicksilver stories are like this one, they're very slim indeed. But hey, it's Max Mercury vs. gangsters in race cars. That's gotta be worth something. AND we might just discover the things that inspired Mark Waid's version of the character. Lets set this up: There's a race car driver called Larry who squealed to the cops about fixed races, see. His girlfriend Betsy is horrified that he's just made himself a target. And she's right. The mobsters are also participating in today's big race and try to kill Larry on the course. Enter Quicksilver, at the right place at the right time, just interested in cars that go vroom. But sometimes, there's murder in the roar of a motor (Larry's turn of phrase, not mine). His first instinct when one car tries to diver another off the track? Take the wheel!

So Max has always had a MENTOR mentality. Teach a man to drive... But while he's at it, a third car blows a tire and really does get into an accident. No worries, Quicksilver is here! 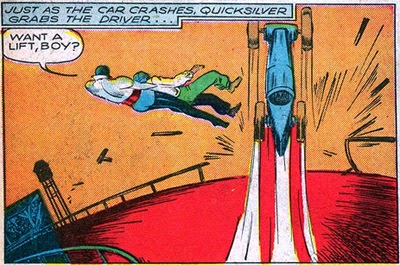 He saves the pilot from getting "smashed into jellybeans", but can't save the English language or that panel's perspective. Then again, I don't mind wonky visuals in a superspeed story, because distortion is bound to happen when real physics are applied. On the track, two assassin cars try to pincer Larry, but Max has taken a second to get a soda. Well, so much for that. 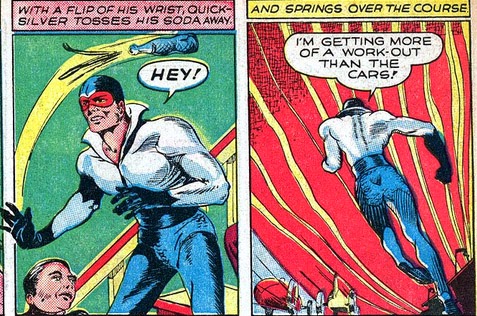 Speaking of distortion, I like the primitive speed lines (streaking tail lights? Speed Force??!) in that second panel. Quicksilver jumps on the back of their cars, allowing Larry to get ahead, and one of the assassins veers off and crashes! But not the main assassin, who is FINALLY disqualified and heads off the track to try and run over Quicksilver! But his "racer is no match for his mercurial speed" (Waid didn't need a phrase like this to inspire Max's new name - Quicksilver is the element's nickname, after all - but it's nice to see it in here) and gets wrecked. Machine guns aren't very useful  against a super-speedster either. 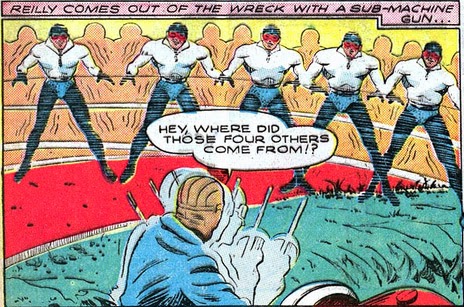 Quicksilver makes short work of the assassin and runs back to the racetrack where Larry is being handed a trophy and the gangsters are trying to make themselves scarce. "Not so fast," says Max, and he means it as a put-down, I think. 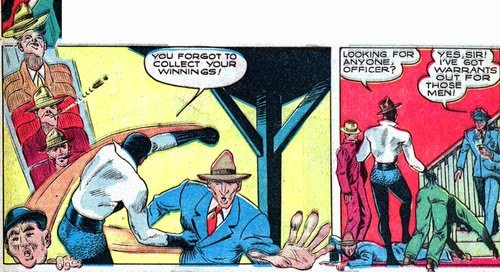 My favorite is the guy in the lower left-hand corner - getting a panel border in the throat can't feel too good. And that's it, really. The crowd cheers our hero, but he quickly zips away, as if on an air current. And though they call him the Laughing Robin Hood, he neither laughs, takes anything from the rich, nor gives anything to the poor.

I've seen very few Quicksilver stories, but those I have seen look like a lot of punching in this vein. As Max Mercury, he may be one of the most improved comics characters ever.

Who else? Let's stay in the Golden Age, to another published outside DC.
Comics Flash Golden Age Who's This?

American Hawkman said…
I actually think Quicksilver was a pretty strong 40s strip. He's a LOT more acrobatic and fluid than Jay or Johnny Quick, and it makes for pretty interesting artwork, despite some fairly thin stories.
June 12, 2014 at 9:27 AM

Anonymous said…
Gotta love the little touches, like Quicksilver got a soda with two straws (was he hitting on a woman?), and the last panel where he's wearing one of the gangsters' hats. He's not laughing exactly, but he is having fun with saving the day.
January 19, 2018 at 6:24 AM