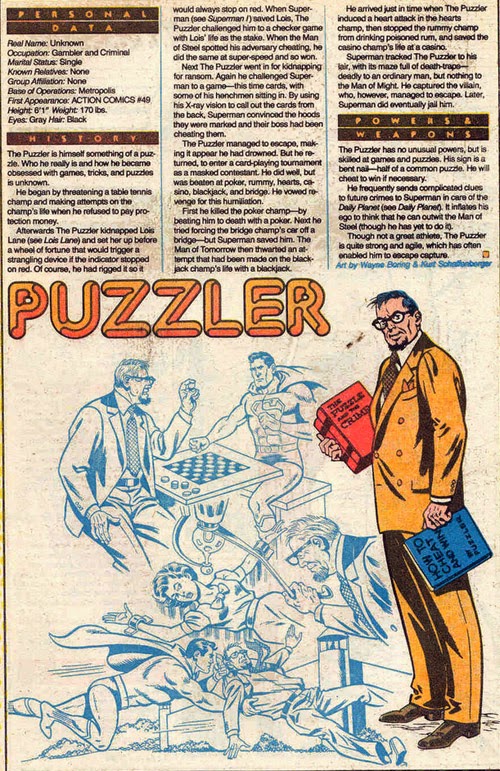 The facts: On the Who's Who podcast, there was some debate over whether vol. XVIII should have ended the P's pat with the Puzzler, leaving out a minor New Gods character like Pursuer. What people should really have been saying is that vol.XIX should have started with the Q's, and left the PUZZLER out entirely. As Superman villains go, he didn't have much of a career. He first appeared in Action Comics #49 (1942), then in Superman #20 (1943), and really, that's it. An "Earth-1" version was revealed in exactly one panel of Jimmy Olsen #115 (1968), shown on one of Superman's home movies, and then in Action #389 (1970), he's absurdly shown as part of Superman's Rogues Gallery on an information page, information that was repeated a couple more times in reprints through 1979. And based on THAT, he gets an entry? (Well, see below.)
How you could have heard of him: The Puzzler's real claim to fame, and perhaps that's why he got into Who's Who, was as a villain on the Batman 1966 TV show, a straight replacement for the Riddler when Frank Gorshin proved unavailable. He was played by Maurice Evans. Otherwise, you might have caught an appearance in 2010's Super-Friends #28, or might be more familiar with the new Puzzler, a woman called  Valerie Van Haaften with a jigsaw-themed costume who premiered in 2002.
Example story: Action Comics #49 (1942) by Jerry Siegel and John Sikela 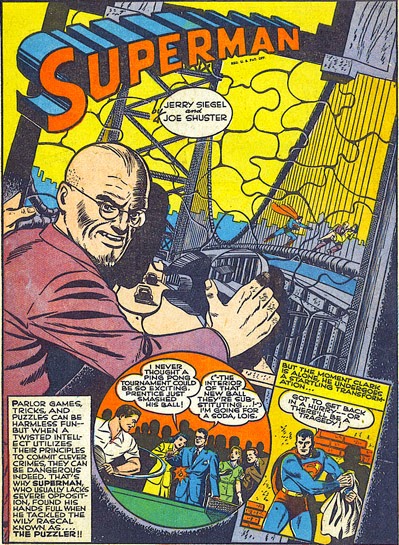 First impression: The character was so obscure, the colorist didn't know to shave the sides of his head in the entry. With the more distinctive haircut see above, he'd look less like a frumpy university professor. Though there's an obvious thematic link to the Riddler, Puzzler is a little less focused. That is, he enjoys puzzles and leaving clues, but he often seems more concerned with hanging his crimes on game motifs.

So the story begins with Superman saving a ping-pong champion from an explosive ball, and later from goons firing at a bullseye painted on the side of his car.

When the Puzzler finally shows up, it's to free his gang from police custody.

Having made a bit of splash with all this, he decides it's time to give his first news interview and sends Clark Kent a letter. Lois opens her colleague's mail, which isn't very ethical, is it? 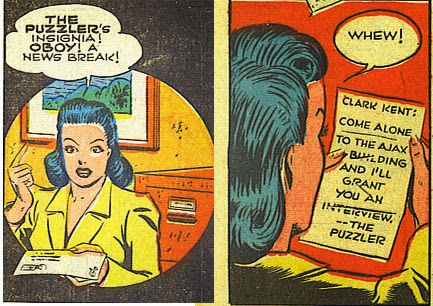 In fact, not only does she read Clark's mail, but she steals his story and heads off to do the interview herself. And she'll get that interview even if she has to do it... at gunpoint! 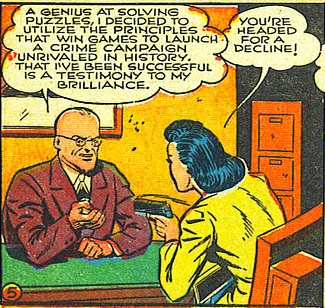 WTH Lois! I've heard of a citizen's arrest, but I didn't know she was packing heat back in the 40s! But it's all for naught, and her chair pins her arms with metal clamps and she's disarmed. When Superman catches up to her, she's about to be electrocuted at the whim of a wheel of fortune. To save her, Superman agrees to play checkers against the Puzzler. We're still waiting for an actual PUZZLE, unless you count having to figure out the villain is cheating. Superman does, by the way, and indulges in a bit of cheating himself.

Hey, the Golden Age Superman plays it like he sees it. He wins, but the Puzzler reneges on his deal and springs a trap on Lois and Supes, escaping while the Man of Steel takes care of it. Two thirds in, he finally decides to pull a Riddler and leaves Superman a series of clues, each on a puzzle piece that sets off a particular trap. And I can really call this a "Riddler" because it turns Superman into Batman. Specifically, 1966 Batman:

I'm reminded of certain scene where Sea becomes C becomes Catwoman, if you know the one I mean. This leads to the Puzzler's hang-out where he and his gang are holding men who have chess-related names or businesses. AND Lois, who has gotten herself captured again. This time, Superman plays for their lives at cards. And it's three against one because two of the Puzzler's goons play as well. They're used to losing their paychecks to their boss, which Superman uses to his advantage, telling them the cards are marked (but he's just using x-ray vision). They only turn on the Puzzler momentarily, no worries, but the diversion gives Superman time to get people out of harm's way. While he makes short work of the gang, the villain once again tries to escape. Just why the Puzzler thinks it's a good idea to crawl up bridge cables is anyone's guess. It'd be even sillier if Superman could fly, but he can't yet. Still, you're gonna get yourself knocked off your perch Golden Age-style if you're not careful.

He wasn't. To be fair, Superman grabs him by the collar, but he gets out of his coat and falls to his death. Except no body. And you know what that means. The Puzzler would plague Superman again. Just not very often.

And what about the OTHER unethical character in the story? Clark "somehow" filed the story before she did. Nyah-ha. But what do you think? Should the Puzzler have had a longer and more  illustrious career? Or is he the wrong kind of rogue for the Superman mythos?

Who else? After a lame, obscure Superman villain, how about a lane, obscure Batman villain?
Comics Golden Age Superman Who's This?

Martin Gray said…
Thanks for that, and who cares if The Puzzler didn't become a regular, I happy to see obscure villains who offer something a bit different.

Siskoid said…
Where would who's this be without obscure characters like him, right?

If I make a low of hay about it, it's because it surprised me how few appearances he had and still got it. I think he may have gotten on the list from that Rogues Gallery page alone (or the TV appearances) and it surprised even the compilers that oops, he had so few appearances. The text makes it seem like he had several entanglements with Superman, but they're all from the same couple issues.
June 9, 2014 at 3:22 PM

Wow, that was six years ago...

And I still remember it because his riff about the Puzzler being inept really appealed.
June 10, 2014 at 11:31 AM