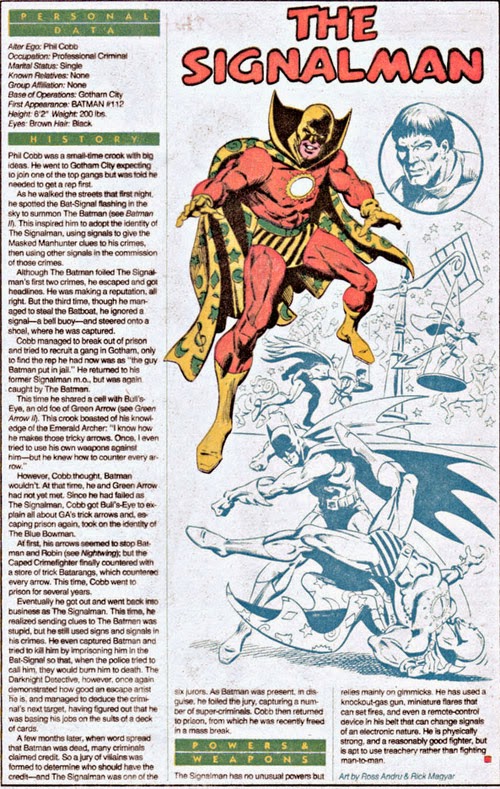 The facts: This garish-looking Batman villain was created by Bill Finger and Sheldon Moldoff in Batman #112 (1957), reprinted in Wanted: The World's Most Dangerous Villains #1 (1972) in case you missed it the first time. He would then return a few times during the Jack Schiff era (#124, reprinted in Batman Family #5, 1976, and #139, this time as the Blue Bowman), then not until Detective Comics #466 (1976). That appearance gave him a small place in Batman's rogues gallery and enabled him to appear mostly in background and/or costumeless when the rest of the villains got together that year, or with the Secret Society of Super-Villains in the early 80s. In the Signalman identity, he only scored three pre-Who's Who appearances as the main villain.
How you could have heard of him: While he's recently been seen in Forever Evil and Trinity of Sin as a member of the Secret Society of Super-Villains, post-Crisis/pre-New52 appearances have been pretty limited and gone out of their way to be humiliating. In 2006, he's tortured and seemingly killed on video in an issue of Manhunter AND is seen as a drug-addled informant for Black Lightning in Justice League of America #1. His entire role in Final Crisis is getting arrested in his embarrassing costume. And in the Batman Beyond comics, he is found violently murdered in his apartment after he has paid his dues to society and retired. No respect. He also appears in a bar scene in the Brave and the Bold cartoon.
Example story: Detective Comics #466 (1976), "Signalman Steals the Spotlight!" by Len Wein, Ernie Chua and Vince Colletta 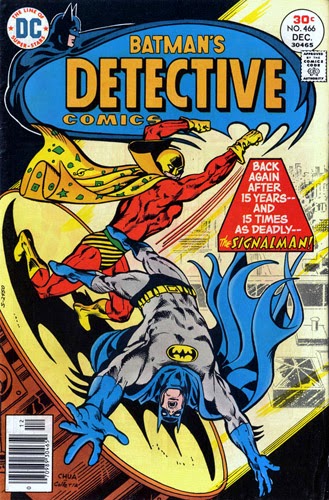 The story starts with a terrible crime as the Signalman tampers with train track switch-signals and causes two trains to collide just so he can steal the Heart of Allah, a ginormous gem. No mention of body count, but in the real world this would be mighty murderous. But in the real world, he wouldn't be recognized so easily: 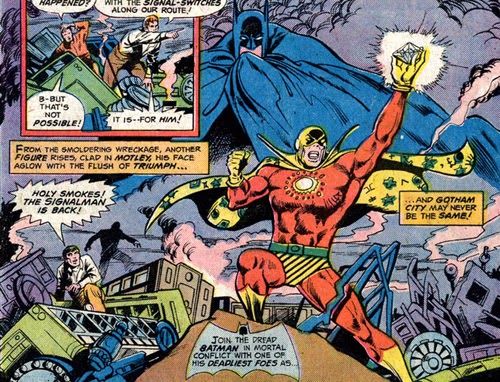 Remember, he may have a distinctive costume, he hasn't appeared in almost 20 years! And only twice! Even with time on sliding scale, that must be some time ago. Train wreck survivor must be an expert or something. Wein is so desperate for us to take him seriously, he actually claims Signalman is "one of [Batman's] deadliest foes". I mean, come on!

But this is perhaps not the most effective version of Batman ever written. When we catch up with Bruce Wayne, he's sitting down to watch baseball and WILD HORSES COULDN'T TEAR HIM AWAY. The bat-signal, however, just might. He'll catch a bit of the game anyway, because S-Man is robbing the stadium. He uses a gas gun to knock out the stadium staff and his special power to "signal" things with signs:

Batman surprises him, armed with nose plugs, and has to throw his bag of money at the Dark Knight, then escape by signaling the jumbotron to say there's a fire. Batman loses him while he's too busy calming a riot down by waving his arms around and shouting. 24 hours later, at police HQ, the "Golden Trophy" is being awarded to the boy who's done the most for the Gotham City Police Boys' Club. 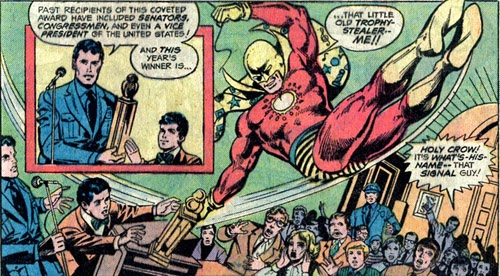 Is it me or are the crimes getting lamer? Signalman does attack Police HQ, I guess that's something, but a Boys Club trophy?! Batman stops him, of course, and there's a fight using the club's athletic equipment that's right out of one of Thailand's most awesome action flicks, Born to Fight (yes, that's a recommendation). Batman's gonna win at fisticuffs eventually, of course, so he uses his signal-flare weapons to start fires, and while Batman is patting down his own cape, Signalman knocks him upside the head. He hauls Batman into the elevator, but cops can't follow because he reversed the indicators (of COURSE), going to the roof while they head downstairs. So while the Bat is unconscious, S-Man could have thrown him off the roof or shot him up full of flares, but no, that wouldn't tickle his signal-crazy psychology. Instead... 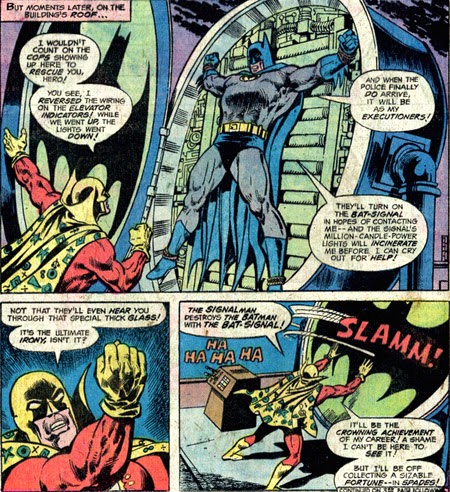 Batman to fry via his own signal as soon as Commissioner Gordon tries to call him. The ultimate irony! Except the cops know he's captured the Bat, so what would be the point of lighting the bat-signal, genius? Well, Gordon is gonna help him out by doing something completely illogical. He'll light the signal on the off-chance it'll "spook that symbolic psychotic". Alliteration, yes. Common sense, not so much. In any case, Batman's ripped wires out and manages to bust out of the deadly signal just then, because he's Batman. And because he's Batman, he knows exactly where Signalman is headed to next: Gotham Cemetery for a bit of grave robbing. Have YOU figured it out? 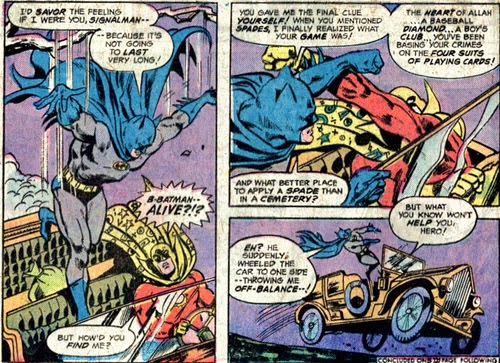 Card suits? Methinks someone's been cheating and looking at the Joker's exam answers.  And what the heck is the deal with the vintage car?! Does that thing even HAVE turn signals?! A real death trap. Literally. Especially when you don't look where you're going. 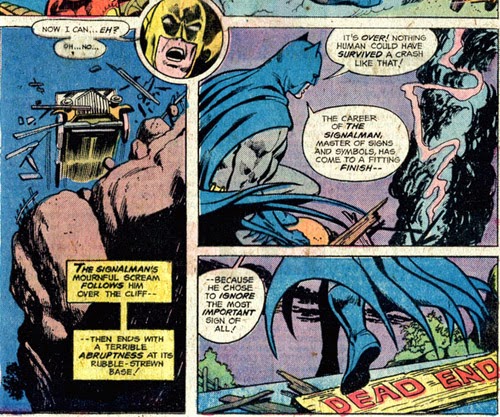 Now THERE'S the final irony. Hardi-har-har. Sorry Signalman, you didn't justify your existence with this story, so I can't possibly endorse your continued existence. Sometimes it's the costume, but in your case, it's the whole package.

Who else? Oh we're staying with the obscure villains. The next one won't be so colorful though.
Batman Comics Who's This?

American Hawkman said…
Still can't believe that he managed to take Batman in his Secret Society appearance. I actually think that the character has some redeeming value. A genuinely crazy version obsessed with signals only he can hear, for instance... or one based on screwing around with electronic signals. All we need to do is tone down his color palette a little...
July 22, 2014 at 5:47 PM

Jeremy Patrick said…
Did Batman ever stop to think that maybe Signalman just needed a hug?
July 23, 2014 at 9:01 PM