Who Are the Terrible Trio? 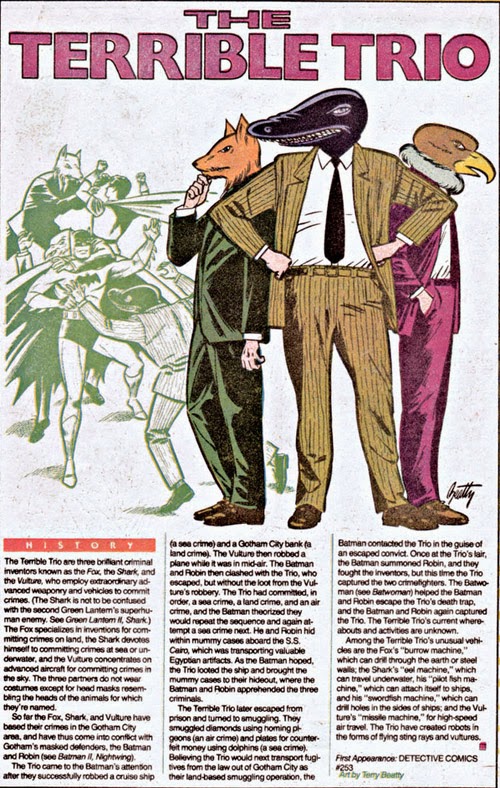 The facts: The Terrible Trio - Fox, Shark and Vulture - plagued Batman and Robin with their land-water-air crimes for the first time in Detective Comics #253 (1958), with a follow-up in 321 (1963). A different group with that name antagonized the Dark Knight in Batman 313 (1979); one of the members was Lucius Fox's son. They were created by Dave Wood and Sheldon Moldoff.
How you could have heard of them: In Matt Wagner's Doctor Mid-Nite mini-series, they were responsible for causing the hero's day blindness, fighting G'nort in GLC Quarterly #5, and more recently appeared in Detective Comics #832 and wound up in Arkham Asylum. They've also appeared in three Batman animated series - BTAS, The Batman, and Brave and the Bold (the one with Bronze Tiger).
Example story: Detective Comics #253 (1958) "The Fox, the Shark, and the Vulture" by Dave Wood and Sheldon Moldoff 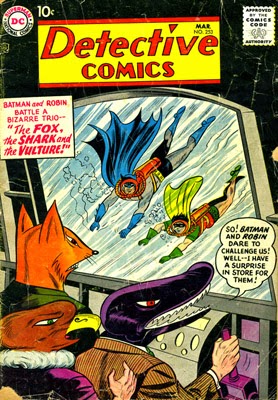 Gotham City Airport: Citizens are saying goodbye to a plane taking a museum collection on a world tour when the guards get gassed by a man with a vulture's head!

That is an unusually stable plane, folks. The guards don't have seats and priceless artifacts are standing still in glasses cases or on tables, no problem. So... why did we have to invent bubble pack, anyway? Commissioner Gordon turns the Bat-signal on and away the Dynamic Duo goes, Robin in the Batmobile and Batman in the Bat-plane. This is the first appearance of the Terrible Trio, but they act like they know all about them. What gives? Well, Batman flashes back to three days ago when an earthquake shook the Gotham Bank and they arrived to late to prevent the Trio from getting into their mechanical mole! 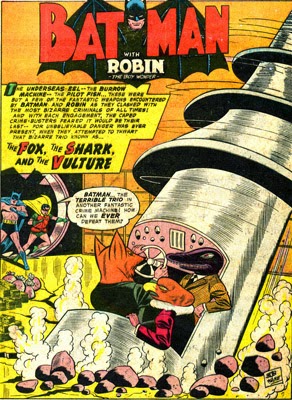 Racing down the tunnel, Batman and Robin were thrown a bomb by the Fox, from the back, and almost perished. Almost, but not quite.

They survived by sticking their heads into broken drainage pipes, obviously. While Batman was going down memory lane, the Vulture was parachuting out of the plane with the loot and making his way to the Fox's mole machine. Batman scares them by sonic booming to bits a giant bottle atop a factory (because Silver Age Batman stories must ALL contain a giant prop of some kind) and believing the army was after them, they burrowed out of them before picking up the treasure. Batman and Robin use a metal detector to follow the mole to the shore where it makes contact with yet another fantastic machine, this time the Shark's eel ship. Eel? Uh-oh.

You can't operate in Gotham City without a gimmick, so it's pretty obvious the Trio commit crimes that are Air, Land and Sea-related, then escape using Air, Land and Sea vehicles. The next crime thus has to be Sea-related, because Land and Air were the last two. (Unnecessary flashback to yet another crime in which the Shark used a swordfish ship to sink a millionaire's yacht. The pattern was obvious without it.) Batman hopes to lure them in with a story of ancient Egyptian relics transported by ship, and the Trio bites on the hook, so to speak. They'll be all over that shipment... after a little bit of R&R in their awesome hideout. Who doesn't love a diagram? 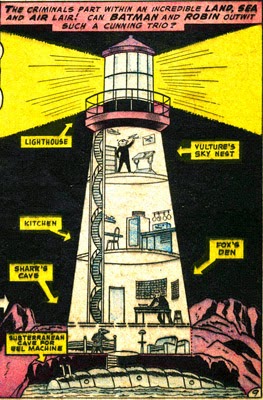 The next day, the S.S. Cairo is under attack by the Shark's pilot ship craft. It sticks to the underside of the hull where the Trio can cut an airlock and enter the ship. 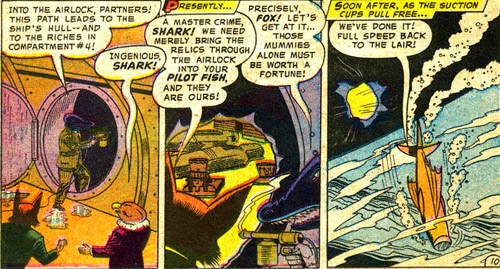 Commissioner Gordon is on that ship, and it starts flooding, but sailors close the door to the hold, so everything's going to be all right. Erm, if you say so. Back at the Lighthouse, the Trio celebrates its newest successful crime and inspect their goodies, but... 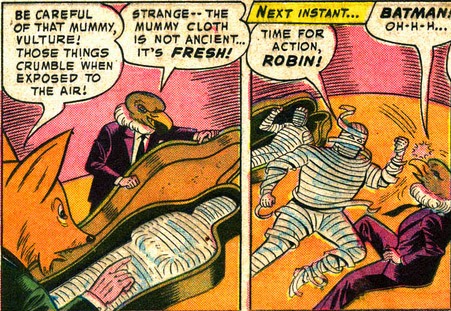 Those aren't real mummies! Fighting ensues and the Dynamic Duo makes fast work of the Trio and their themed traps. Going up each level, only the Vulture and his remote-controlled robot birds. No problem, sayeth the Batman.

You really needed it to be a working lighthouse, eh? Look how that worked out. If you can. Because you're blind now. All that's left is for Gordon to show up to arrest them. Case closed.

I'm actually surprised the Terrible Trio didn't appear more than it did. After all, thematic crimes are Batman's bread and butter. Maybe the alliterative name made some writers think they were actually terrible. Maybe their individual names were appropriated by other characters, both at DC and elsewhere. Maybe the band just broke up. I don't know. But I think they would have made interesting crime lords in later eras.

Who else? Thriller might have been next, but I reviewed the whole series as part of my Old 52 feature. But we are going to do a team next.
Batman Comics Silver Age Who's This?

Ryan Lohner said…
Huh, I always figured they were an invention of Timm and Dini. Their B:TAS appearance was an awesome episode, far better than any of their comics exploits appear. How can you top the satisfaction of a snobby rich guy bragging that his lawyers will beat any charges, then cutting directly to him being thrown into a dingy, roach-infested jail cell?
October 21, 2014 at 12:27 PM

American Hawkman said…
Genuinely surprised that you picked guys with such a heavy presence in other media. I'll note that they are still a thing, with Warren White as the new Shark, the old having chosen to try and murder his partners for some nebulous reason.
October 21, 2014 at 4:33 PM

Siskoid said…
I tend to think comics first, and even hark back to my reaction on seeing the characters when Who's Who came out. Then finding out they have so few appearances to their name... Ryan here even thought they were original to the cartoons.
October 21, 2014 at 6:45 PM

Erich said…
Brian Bolland did a story in "Batman: Black and White" about an ordinary guy who plans to assassinate Batman; as he explains himself, he sets the scene: "One day he'll be face-to-face with Two-Face...or tangling with Poison Ivy...or in the lair of those three guys with animal masks whose name I can never remember!"
October 22, 2014 at 12:37 PM

Moriarty said…
Speaking of your Old52 feature... it's been while. Really loved reading those. I suppose it's abandoned at this point? Too difficult to track down the back issues?
October 23, 2014 at 4:20 AM

Siskoid said…
Just finding it difficult to find the time to read a longer batch of comics - haven't even read any new comics in the past couple months! (Unless you specifically saw them reviewed here.)