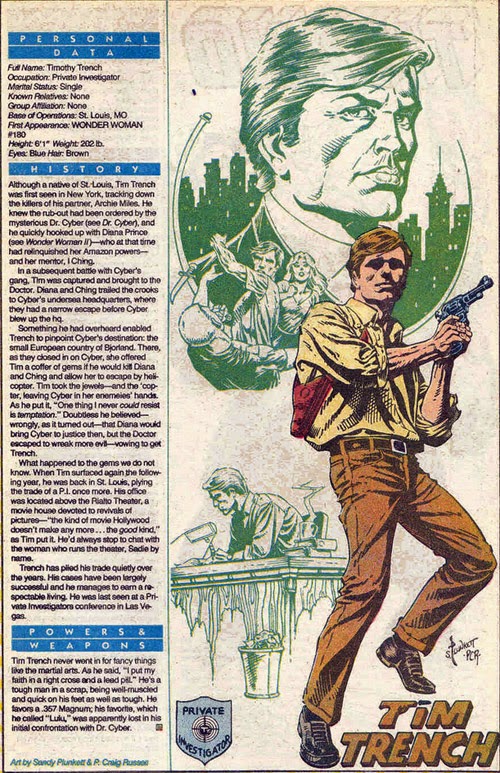 The facts: While it seems like Tim Trench might have started life as a Detective Comics back-up or something, he actually first appeared alongside mod Wonder Woman in #179 of her series back in 1968. He helped her and I-Ching defeat Doctor Cyber in his first few issues. After WW #182, he disappears only to show up again in 1976's Detective Comics #460-461 back-up as a much younger man! His gun "Lulu" had been replaced by a pair of Magnums and he'd moved house to St. Louis. Did Denny O'Neil, who wrote both versions, just recycle the name? In any case, the two 'Tec shorts didn't lead to more. It would take another 20 years before he showed up again in Swamp Thing #162 as, weirdly, a member of Hero Hotline (though being stuck in traffic, he never took part in the adventure per se). Not sure what the entry's Vegas reference is all about.
How you could have heard of him: On Week 18 of the 52 series, Tim Trench was killed and revealed to be a member of the same detective secret society the Dibnies, Detective Chimp and Traci Thirteen were in. So his 8th ever appearance was as a mystery to be solved...
Example story: Detective Comics #461 (1976) by Denny O'Neil, Pablo Marcos and Al Milgrom The second of two solo capers for the character, a quick glimpse at Tim Trench's narration and you can immediately tell he's a throwback to the film noir era, and he knows it. Based quite clearly on Humphrey Bogart/Sam Spade, Trench lives above a movie theater dedicated to Hollywood's golden age, an era he loves and from which he pulls most of his references. 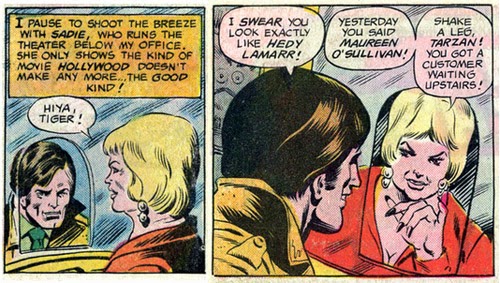 This is a guy whose prose sounds like this: "It begins, like a lot of 'em, on a night when Mama Nature is weeping on St.Louis..." Trench's whole persona was assembled from gumshoe movies, which makes him inherently more comic booky than most comics detectives (like Jason Bard, Roy Raymond, etc.). I like him already. Fixed in a bygone age or not, Trench is also a 70s hero, by which I mean, he's so wonderfully violent! When he finds a "gunsel" who goes by the name of Manooch in his office, he slaps him around real hard. 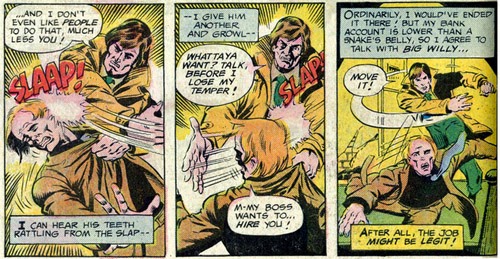 Hey, don't beat up the messenger. He's just there to take Trench to his boss, a fancy-pants mobster who's fallen out of favor with the Family and needs a bodyguard to take him to the airport in exchange for a cartoony bag of money. Blood money? Fuggetaboutit. No, no, it's from the dude's legit businesses. Oh in that case...

Some decisions are easier to make than others I guess. To the point, as Trench, Manooch and his boss go over to the P.I.'s car, Manooch bolts and a car screeches into view. A kindly homeless blind man Trench had talked to earlier is also on the street and as guns start going off, Trench must choose between him and his corrupt employer. No real choice there. 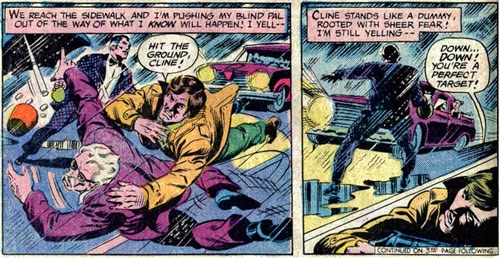 At least he tried to scream advice at him, and if he'd listened, he'd still be alive. Trench failed at protecting the mobster, but could at least get revenge. He whips out his twin Magnums and kills the driver. The car "careens outa control and kisses a pole!" As for the guy firing the tommygun, he gets out of the car, but as Trench says, he doesn't often miss...

Next on his (s)hit list, Manooch. Obviously, the guy knew this was going to happen because he dived for cover BEFORE the car showed up. The mob boss was scum, but if there's something worse than scum, it's a traitor. And Tim Trench HATES traitors.

It's not about the money, it's about professional ethics. And giving something back to the community. And about beating up punks like Manooch.

Oh man, now I wish this strip had run a lot longer. O'Neil would bring the same kind of grit to other projects, of course, perhaps most notably his work on the Question and various pulp properties, even his Daredevil, but never with this much film noir flair. I would like to imagine Trench's modern stories, where he is basically a man out of time, playing at being a film noir hero, putting on those speech patterns, and perhaps really being as mad as any Batman villain, though on the side of the angels. Bored to Death without the stoner comedy?

Who else? Place your bets! Volume XXIV of Who's Who probably has 7 or 8 more entries that could fit the bill!
Comics Who's This?

American Hawkman said…
I'm easily Tim Trench' s biggest fan. O'Neil definitely was showing his fandom of Mike Hammer there. The Vegas reference is from his CRISIS cameo, where he attends the PI convention there. I would love to see him return soon.
November 4, 2014 at 8:58 AM

Wayne Allen Sallee said…
That logo is better than half of the new 52 logos. I'm looking at YOU, Suicide Squad.

Doppelgänger said…
The Wonder Woman Encyclopedia clarified that the younger Tim Trench in Detective Comics was the Earth-Two version. The Vegas conference was in Crisis when Angle Man died.
March 16, 2021 at 2:57 AM