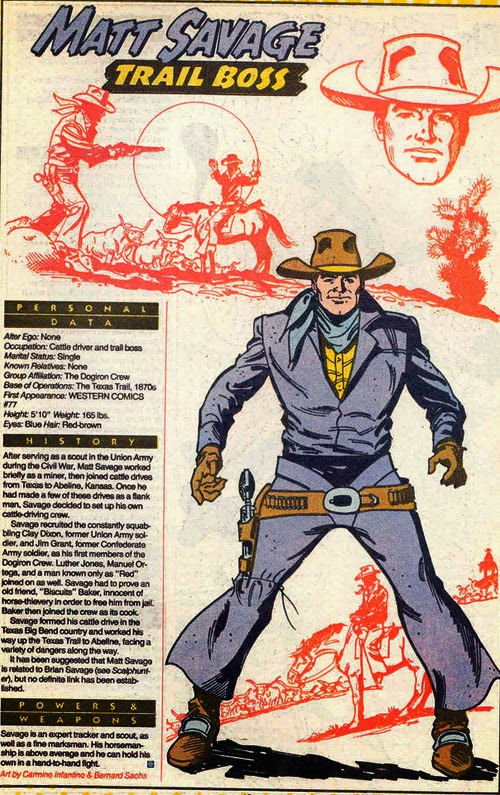 The facts: This western strip headlined Western Comics from #77 (1959) to the book's cancellation with #85 (1961), a mere 9 issues. A few of these stories would be reprinted in the early 70s (in Super DC Giant and Action Comics). Scalphunter AKA Brian Savage, his son, started appearing in Weird Western Tales with 1977's #39, where Matt appears. If Who's Who seems to refute the idea these were the same Matt Savage, it's because the timeline doesn't seem to make sense.
How you could have heard of him: James Robinson cemented the link between Matt and Brian Savage in his Starman series. Matt and other western heroes had a cameo in Armageddon: The Alien Agenda #3 (1992), Infinite Crisis #6 (2006), and DCU: Legacies  #3 (2010).
Example story: Western Comics #80 (1960) "The Texas Trail Robbery" by Gardner Fox, Gil Kane and Joe Giella 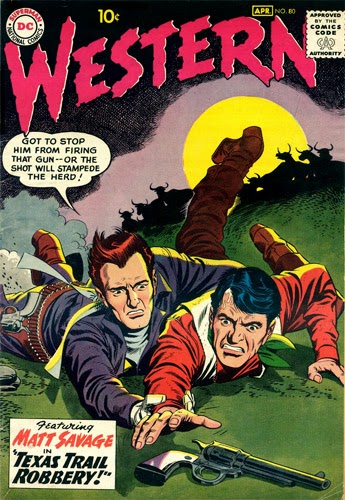 The series vetted based on Rawhide's popularity, I might have randomly picked the most cattle drivingest of all cattle driving stories with this one. Were they all like this? Or did writer Gardner Fox spend all his cattle driving lore in one go? One thing I wasn't expecting was for Matt Savage to be played by John Wayne. That's quite a likeness. Lawsuit pending, I'm sure. Anyway, we're deep in procedural waters on this trail, which is a broken metaphor because the herd is dehydrating due to LACK of water. Wild animals can survive more than 48 hours without water, but...

So take note: Aquaman is worth half a cow, according to Trail Boss Matt Savage. You want to find water in the West Texas desert? Look to the skies! A flock of rose-breasted grosbeaks migrating from Central America is way off-course looking for agua, but they've got a better vantage point!

Savage jumps on his rose-breasted horse, Bronc, and rides the birds down to water. Yee-haw! As the herd starts to drink, the drumming of hoofs! Here's another "procedural" problem cattle men might face:

Mixed cattle will cause delays! Weaker animals trampled at the trough! The second herd is the responsibility of Trail Boss Greg Parker, and he has no qualms about making veal cutlets out of Savage's weak-sauce herd. But when he pulls a gun on his competitor, he gets more than he bargained for.

I wish I knew who the colorist was on these, but his or her name wasn't recorded. I know I poked fun at the pink horses, but I love the fight sequence as the sun goes down, and the light changes.

Parker really is irresponsible, risking a stampede just because he can't keep it in his pants. We're really getting a primer on how to become a trail boss ourselves, aren't we? What other dangers await your herd, city slicker? How about quicksand on a riverbed? 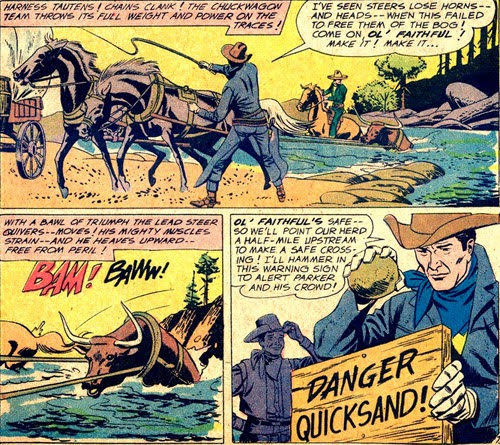 Savage almost loses a steer, but this time, it's appropriate to make beef stampede a little bit. And because our hero loves cows so much, even another man's, he puts up a sign to alert Parker to the danger. That sure is nice of him. Though worried that Parker will pull ahead and reach the best grazing fields before his herd can get there, Savage still needs to stop for the night. While he's sleeping, a well-known gambler, Dexter, comes to the camp to fleece Savage's men of their salaries. They gladly do, and can't win their money back because the game is rained out by a sudden squall. The next morning, as the herd gets ready to pull out, the sheriff comes into camp with Dexter and accuses Savage of stealing the gambler's winnings. And there they are in Savage's saddlebags, each dollar with a corner ripped off for luck. The herd is at a standstill until the matter is resolved.

One court case later and Savage has managed to prove the money was planted because it doesn't look all crinkled from having been soaked at the poker game the night before. Dexter admits to having frame Savage for 100$, paid in full by one Greg Parker. Some guys just don't play fair. Now Parker will get what grazing land is left after this drought and Savage's will just have to take what's left. Do you want to press charges, Mister Savage? Why no, I'm too nice a guy.

Oh karma, you're such an ass-biter. Parker took so few precautions trying to win this "race", he let his cows get sick. And now he's stuck there for a month. Ha ha.

Not a bad tale, I must say, well drawn and scripted, with lots of procedural details. So many western features turned to aliens and monsters in the Silver Age, it's a comfort to know there were still straight westerns being made, even if they didn't manage to sustain this particular title very long. Perhaps that's why Trail Boss Matt Savage isn't really remembered today. Decent, but no gimmick to make him memorable.

Who else? Maybe we're due for a Flash villain? Because not all Rogues were created equal.
Comics Silver Age Who's This?