December 17, 2014
Who's This? One of several Turtle Men on page 18 of Who's Who vol.XXIV. Not sure why Who's Who uses the name "Turtle Man" when the entry says the original was "The Turtle" and admits the second was last seen using "The Turtle" as his nom de guerre. 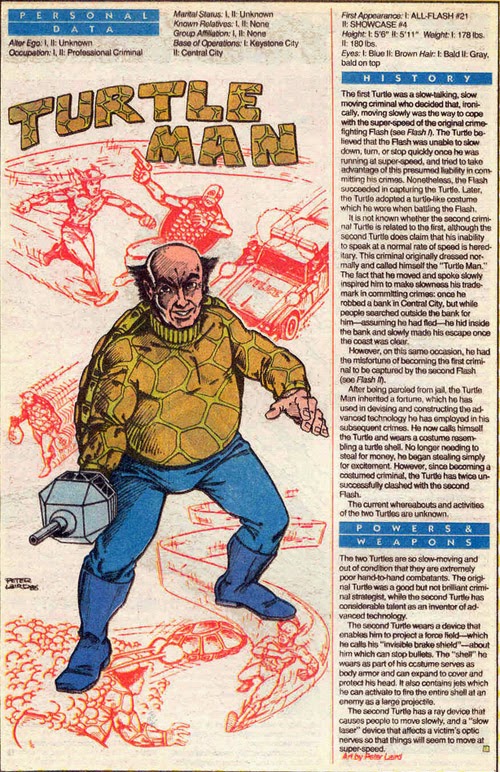 The facts: Prior to Who's Who coming out, there had been two Turtles of note, both Flash villains. (Others, NOT of note, aren't mentioned. In 1943's Star-Spangled Comics #17, Robotman defeated a criminal called the Turtle; and in 1947's Adventure Comics #122, Green Arrow had his own Turtlish encounter). Of those mentioned, the first was a Golden Age villain who pestered Jay Garrick in All-Flash #21 (1945), returning in Comic Cavalcade #24 (1947). The second was the first costumed villain apprehended by Barry Allen (so in Showcase #8, 1956), yes, calling himself Turtle MAN, and would return a couple times, in Flash vol.1 #220 (1973) and DC Special Series #11 (1978), by which point he was simply called the Turtle.
How you could have heard of them: Once Wally West moved to Keystone City, he had to confront the original Turtle, now a crime boss with an armored henchman called the Turtle Man. The Silver Age Turtle Man was also featured as a fan of the original who had been crippled in an explosion (as told in Flash volume 2 #35, 1990). They appeared a number of times between 1990 and 2005, and occasionally elsewhere.
Example story: Comic Cavalcade #24 (1947) "The Slow-Motion Crimes" by Robert Kanigher, Carmine Infantino and Frank Giacoia (it has been reprinted in The Greatest Flash Stories Ever Told) While the original Turtle had many more appearances than Barry's opponent, his original concept was changed so much in his modern age appearances, he might as well be a different character. The Silver Age model has one big story, and that's his frequently reprinted first appearance, Chameleon to Flash's Spider-Man. That explains my choice. What follows, I think, justifies it. The story starts with the Turtle's home movies, recapping his previous adventure and promoting how slowness can be used against the Scarlet-plus-jeans Speedster. 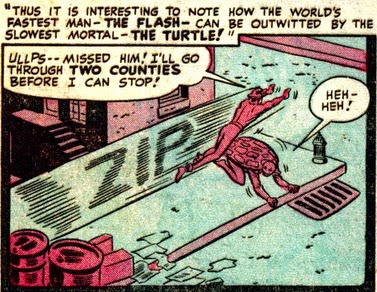 I don't know if his henchmen are convinced, but when you're in the henching game, you should expect this kind of obsession, which in this case includes a personal museum of slowness, and the slow...est... plan... explan...ations... ... ...ever. But the Turtle doesn't just want to use slowness against the Flash, he also plans crimes that specifically mix fast and slow ideas. For example, a train robbery. See, it's the Century train, and he's stealing rare plants. Century - Plant. Century plant! The slowest-growing this on Earth! Of course! (Feels like Batman '66, don't it?) The Turtle makes his approach slowly...

...but gets there just in time for the correct wagon, a compartment filled with rare orchids and protected by Congo Bill's sister, Miss Iris.

Silly Iris, turtles have shells. Coincidentally, Jay and Joan Garrick are aboard this tain, so the Flash intervenes, but gets gassed before he can stop the Turtle from taking off with the flowers and Iris herself. By the time Jay comes to, the Turtle has gotten to his getaway car, which takes off abominably slowly.

THAT'S how slowness can work against speed. Man, a dinged-up knee hurts SO BAD. The Turtle's next crime is to steal the profits (meant for an orphanage for extra evil) of a dog race involving champion racer Comet. Again his goons don't see what this has to do with slowness, but they were specifically chosen for this trait: 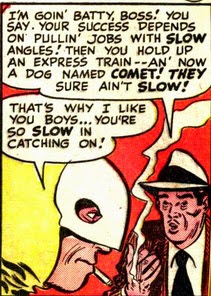 We also find out why the Turtle is so slow: He's a smoker. What neither his henchmen nor the readers know is that Comet belongs to a Mr. Halley. Halley's Comet, an object that appears only every 76 years... SLOWNESS! Relatively speaking, of course. The Turtle could justify any crime. He also can't resist joining the race, especially since Comet looks like a giant hare.

Any fable fans out there? The Turtle makes his escape very slowly in a stolen air balloon, but the Flash reaches him by jumping on a stunt plane and invisibly (because if you use speed in place, no one can see you, duh) directs it to the balloon.

When he jumps on, he finds the balloon ripped open and the Turtle has gone, escaping the slow way down via parachute. Jay survives the fall, but wakes up in the Turtle's clutches, roasting slowly over some coals, his speed sapped by over-heated electrons... Why haven't I heard about this weakness before?

The Flash gets out of the trap by rotating slowly on his spit and causing the cabin's chimney to emit smoke signals only people with the JSA's TOP SECRET code book can decipher, Luckily, a Junior Justice Society of America member lives on a neighboring farm!

Very, very cool for kids back then who had the opportunity to join this fan club and learn the secret code (don't know how it translates into smoke signals, but it was based on Wonder Woman's knowledge of the Greek Alphabet). 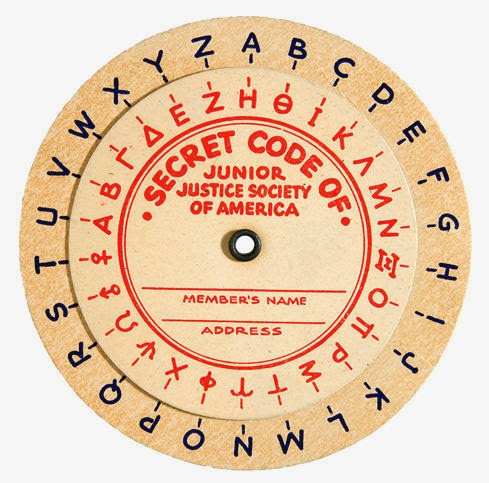 Meanwhile, the Turtle is going to steal diamonds created by an artificial lightning process (slow/fast) created by a professor H. Salf. A strange name, and the Turtle is ironically too slow on the uptake and doesn't think to question it. Don't ask when and how Jay Garrick arranged for the fake article in the paper or the diamonds on display in the lab, just accept that this is how he finally captures the Turtle.

Who else? Let's quickly move on to another subject... and to another Earth!
Comics Flash Golden Age Who's This?

Jeremy Patrick said…
I just love those plot twists in gold and silver age stories. It requires a willing suspension not just of disbelief, but of rational thought altogether. I don't think I could write like that even if I wanted to, but it makes those stories so much fun with their random leaps.
December 18, 2014 at 10:28 AM