January 22, 2015
More than five years ago, I wrote an article about GURPS' 10 Strangest Sourcebooks that is still one of the most popular things I ever wrote. Not to try and capture lightning in a bottle or anything, but I so often think about GURPS (that's Steve Jackson Games' Generic Universal Role-Playing System) and my obscenely large collection of sourcebooks, that I really don't have a choice. I have to generate more GURPS-related lists. I've held my peace for too long! This time around, I offer up some of GURPS' coolest licenses. See, one of the things SJ Games was pretty good with was getting licenses for various book series, computer games, and comics (even e-comics) and turning them into cool role-playing settings. Looking at them today, I think some make very nice sourcebooks about the subject matter, but not necessarily easy to use RPG supplements (The Prisoner, for example, or Callahan's Crosstime Saloon). Others, especially from early on, are too much like gazetteers and fail to evoke the flavor they should (Humanx is among these, but I could also name the more recent Alpha Centauri). And lastly, I think I'd hold back on discussing GURPS books based on other RPGs; that could be its own article. So with all that in mind, what are my 6 favorite licensed GURPS books (in no particular order)? 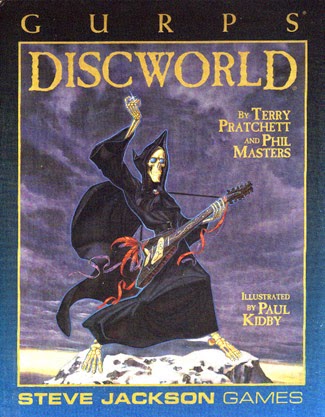 Discworld
The World Is Round... And Also Flat!
When I first read Terry Pratchett's The Colour of Magic, I thought it was essentially the sword & sorcery version of Hitchhiker's Guide to the Galaxy. As it turned out, Pratchett's Discworld turned out to have a lot more heart, and a richer, deeper background, spawning many books with a variety of protagonists. That makes it a great setting for a role-playing game, fantasy with a fun, comedic twist. Steve Jackson Games expended a lot of effort to get it in fans' hands, letting Pratchett co-author it (he was a GM from way back), filling it with Paul Kidby's beautiful illustrations (art isn't always a GURPS book's best feature), adding GURPS Lite at the back for new gamers, publishing a second book (Discworld Also), and reprinting the first book with the GURPS banner as a "powered by GURPS" release to sell it as a stand-alone RPG. The book is an excellent resource for fans of the series, of course, but works well as a role-playing product as well. It's got jokes - chapter titles like "Places to Go, and Why Not to" have the right flavor - but seriously stats up characters, monsters and items, without overwhelming the new gamer with crunch. In fact, in line with the spirit of the source material, the book encourages a loosey-goosey handling of magic. Don't sweat the details, so long as it's funny. That's perfect for this kind of thing, and totally blows GURPS' reputation for dry crunch out of the water.

Hellboy
Hellboy is Here!
A release that went directly to "Powered by GURPS" and made available in both hard and softcover, Hellboy is structured and written so that the gamer doesn't need to buy the GURPS 3rd core rules. The more comic-sized format, glossy color pages and liberal use of Mike Mignola art makes it stand apart from GURPS releases anyway. It's gorgeous and just flipping through it makes you want to create a B.P.R.D. agent right away and start playing. Because GURPS (by which I mean GURPS 3rd ed.) has so many sourcebooks, a good mash-up setting is really the best use for the game. If a GM wants to expand on the world of Hellboy in his or her games, he or she can go to Steampunk, Weird War II, lots of horror and conspiracy-related books, etc. Even sticking to this book, there are lots of ideas to fuel games for a good long while.

War Against the Chtorr
What Do the Worms Eat?
I read David Gerrold's "environmental invasion" books when I was a teenager and though they were a little dry, the aliens DID make a strong impression. A few years later, I was stoked to find GURPS was publishing a companion volume. The idea behind the Chtorr is that they invade by "terraforming" planets with their own ecosystem, in stages, until it becomes inimical to native life forms. As a campaign, I think it would be very interesting to skip through the various stages of invasion, maybe even with different groups of PCs (giving the GM permission to make the scenarios appropriately deadly). It's a gradual apocalypse, the planet Earth becoming progressively more dangerous, more "monsters" being introduced, as time goes on. And that's pretty cool.

Lensman
Starkly Astounding Space-Opera Adventure!
I've tried, and I can't really read E.E. "Doc" Smith's books today. They're wayyy too dated. But as a retro, pulp SF setting, his Lensman universe is actually pretty fun! The battleground is the entire universe (because in the old days, that seemed like a very small space), the heroes are big, the morality black and white. Personally, I'd play this one with wry irony, as if every character was cousin to Zapp Brannigan. This is the kind of game that could start with standard 100-point characters, and let character improvement balloon up to 1000-point psionic juggernauts by the end. Doesn't have to be believable, only needs to be EPIC. The book addresses some of the retro features of Smith's stories, including the issue of their sexism. By all means, play this as Mad Men in space, but the author (Sean Barrett) has an interesting discussion on the subject and offers other alternatives. It's not the only "classic bit" included for flavor either. 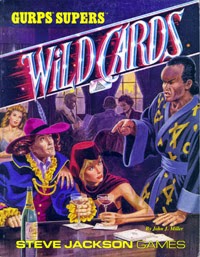 Wild Cards
Roleplaying in the World of Aces and Jokers
Today, George R.R. Martin is well-known for Game of Thrones, but I encountered his writing much earlier as co-creator, editor and partial writer of the Wild Cards series. Starting out as a short story anthology before turning into novels with multiple authors, Wild Cards imagined a world hit by an alien plague that metaphorically made victims "draw a card": a Black Queen meant you died, a Joker meant you were mutated (think the Morlocks in X-Men), an Ace meant you gained super-powers, and a Deuce was a very very lame power. This re-writes history from the 50s on, and often "adult" superhuman stories ensure. I loved this idea, even more so because it was infamously based on a superhero role-playing campaign (using Superworld, apparently). An early sourcebook, it does require GURPS Supers to be a useful gaming aid, but all the characters you liked from the early books are statted out, and the world well described. Superpowers and GURPS are an odd fit because the system is so realistic and deadly, but Wild Cards always had a foot in the real world and its grittiness is a better match for GURPS than if it attempted the DC or Marvel four-color universes. A second book called Aces Abroad was also released, and this presented a series of adventures based around a world tour that opens the setting up in an interesting way. 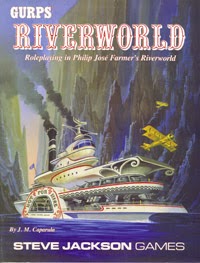 Riverworld
The Grand Adventure
Another fairly early product, GURPS' attempt to recreate Philip José Farmer's Riverworld tickles a number of my fancies. But one caveat: The sourcebook is very spoilery with the revelations from later books in the series. I took great care not to read too much of it until I finished PJF's novels, thankfully. The Riverworld, if you don't know it, is a planet where all of humanity has been resurrected. One day you died (or will), and the next, you woke up on the riverbank, with some combination of people from history and contemporary times. How do you build a community? what is the Riverworld's function? Who will you meet from a cast of basically everyone ever? Might you even play YOURSELF? All of that is very intriguing, especially in a set-up where only the GM has read the books. It could even be a sequel to other games, with players resurrecting old PCs from disparate games. What fancies does it tickle? For one, I've always been very interested in games where the PCs don't have much more than their wits to work with, and Riverworld is very close to an Ice Age setting as far as technology goes (at least at first). Second, I love mash-ups and the ability to use all those GURPS books I own, and running Riverworld would require me to check my historical sourcebooks to accurately recreate everything from Vikings to Samurai to Aztecs. Man, I've gone and made myself eager to play something I doubt I'll find the players for. Then again, why am I friends with so many History majors if I'm not going to use them?

So those are my faves. Perhaps you have a different opinion. Maybe you're all about L. Sprague DeCamp's Planet Krishna, of Wolfe' The Book of the New Sun. Maybe you're enjoy the heck out of Uplift, or Horseclans, or Witch World. Maybe you had a long-running Conan campaign you'd like to share, or remember the Myth computer game. As usual, I'm game to read your comments if you're game to write them. Next week: More GURPS! (I really need to get some antacid for that).
Books RPGs

Ben said…
Are you sure you don't mean Aces Abroad? Aces High was the second fiction anthology in the actual series.
January 23, 2015 at 10:04 PM

JD said…
How disappointed I was to not see my own favorite on this list:

Siskoid said…
It was on my short list, then dropped off in my final selection.

Perhaps because I find the notion of crafting a New Sun campaign a little daunting. I'm not sure how I'd go about it.
January 24, 2015 at 4:18 PM