Who's Gary Concord, the Ultra-Man? 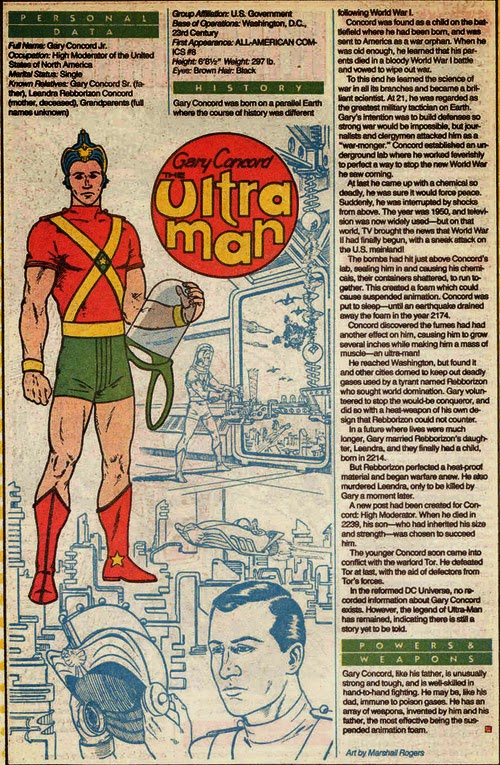 The facts: Created by writer-artist Jon L. Blummer under the pseudonym Don Shelby, Gary Concord the Ultra-Man debuted in All-American Comics #8 (1939). In All-American Comics #9, the story continues with Gary Concord, Jr., who would appear until issue #19 (1940), after which he was pushed out by the growing stable of superheroes. 46 years later, he shows up in Who's Who to everyone's befuddlement.
How you could have heard of him: You might remember Legionnaires Annual #3, part of 1996's Legends of a Dead Earth, in which a time-traveling X-S meets a revamped Gary Concord who is inspired by the Legion to create his own super-team on planet Almeer-5. He's the one who speaks exclusively in clichés.
Example story: All-American Comics #11 (1940) by Jon L Blummer (as Don Shelby) 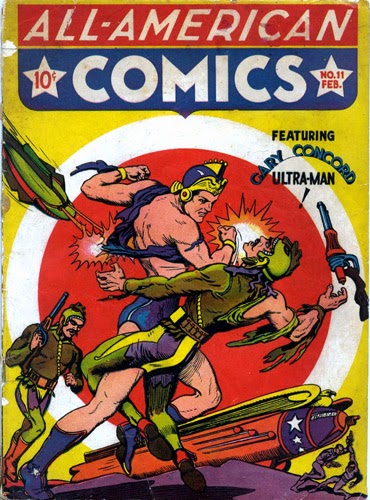 If Gary Concord has the look of a matinée serial character like Flash Gordon, the strip also has that feel. Unusually for the Golden Age, the Ultra-Man feature is a serial, ending most chapters with a cliffhanger, and picking the action up in the next issue. So let's catch ourselves up with Chapter 4's recap:

Hm. That MAY not be enough to go on. Still, let's forge ahead. Context will hopefully be our friend. Gary and Guppy (non-powered sidekicks must have humiliating names, it's the law) are dying from poison-bombs and Gary must make the foam cure before he loses the ability to speak anything remotely resembling sense. 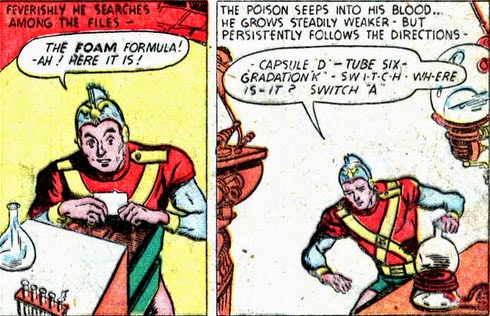 While the 2 Gs are resting up, the fascist lingerie model Stella Tor blasts the door down with the studdly Scientist Z-X, LITERALLY a mustache-twirling villain.. 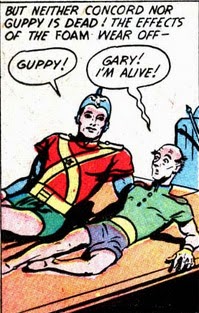 Luckily for our sleeping beauties, Gary's one batch of foam is out of control and smothers all of Tor's men before they can batter down the next door. Stella escapes its soporific effects however and the boys take off after her in a "strato-rocket", hoping to overtake her in the "helio-shaft". The trip is rock'n'roll (excuse the anachronism), but G&G have handy hamster balls to protect them.

Yes, Guppy, YANK THAT KNOB (see what I mean?). Once they've yanked all the knobs that needed to be yanked, Stella's rocket is destroyed. 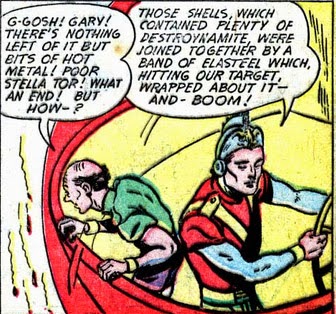 "Destroynamite", "Elasteel", "Boom"... where do they get those crazy words? When the duo turns on the "visa-phone", they immediately get a message from Stella's dad, Just Plain Tor, and he's so angry, it makes him run at the mouth!

His motivation: Insecurity because he was his class' "backward pupil". Well, at least he isn't an underachiever. Dare to dream, kids. You too can be a tyrant if you really apply yourself. Then you'll see, they'll all bow down! Or at least give you their lukewarm agreement. Gary's rocket is really just a big missile, and it's set to land in the middle of Tor's kingdom, splash dab into a lake. Good thing they've got those hamster balls!

Now that Tor's got the foam formula (I guess Stella uploaded it on their Dropbox or something), they can modify their poison so we'll never be able to cure it, mwah-ha-ha! But that's all next month, in another exciting installment of Gary Concord, Ullllltrraaaaaaa-Maaaaaaaaaaaannnnnn!!!

What do you mean this was never an official part of the DC Universe's future history?

Who's Next? Should we do that JLA villain no one remembers, or should we jump to volume XXV?
Comics Golden Age Who's This?

American Hawkman said…
I kinda like Concord. He's unusually strong, has the whole Flash Gordon thing going, and has the kind of codename you could conjure with. I wouldn't mind seeing him somewhere more regularly.

As for next time, the Unimaginable tends to pop up someplace every decade or so, usually in a way that contradicts his previous appearance, which I'm starting to think is on purpose, considering its name. He'd be a good pick.
January 14, 2015 at 8:56 AM

Martin Gray said…
Oh ŷeah, and where comics are concerned there was also Hawkman around this time, but I was thinking Adam because of the combo of harness and crested helmet.
January 16, 2015 at 6:29 PM