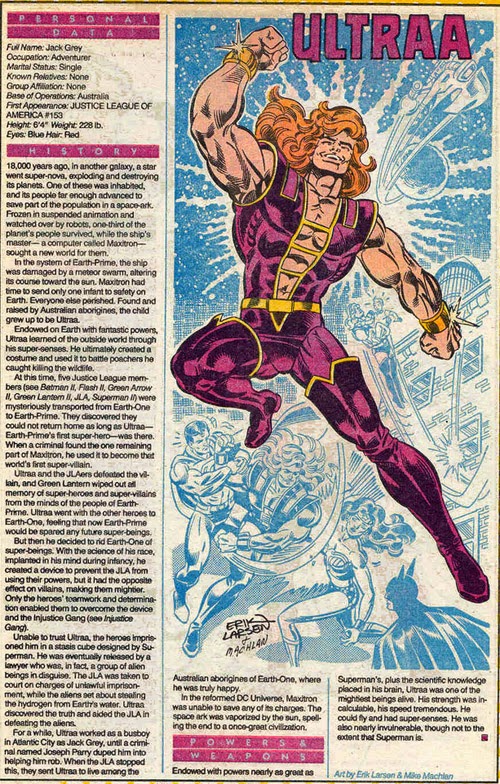 The facts: Created by Gerry Conway and George Tuska as the first (and at the time, only) superhero of Earth-Prime in Justice League of America #153 (1978), Ultraa would appear in a smattering of issues in that title's next four years. The Crisis on Infinite Earths would do away with Earth-Prime, dooming the character to obscurity even though he'd moved to Earth-1 by then (because Earth-Prime is OUR Earth, and obviously, there's no room for superhumans here).
How you could have heard of him: Ultraa was reintroduced in Justice League Quarterly #13 (1993) as a native of the planet Almerac and Maxima's betrothed (poor guy, she was always over here trying to get another consort). He would later turn up as a League Buster in JLI vol.2 #65 (1994). Grant Morrison will be using him in The Multiversity (in Multiversity: Ultraa Comics).
Example story: Justice League of America #201 (1982) "A Hero for All Seasons" by Gerry Conway, Don Heck and Bob Smith 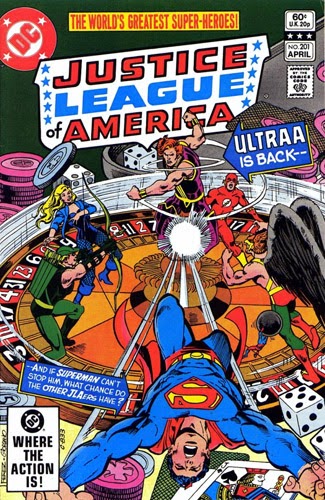 This was Ultraa's last pre-Crisis appearance and as it turns out, it kind of reveals the reason why. He's actually not the biggest loser in the issue; that title goes to THIS GUY:

That's Joe Parry, the villain from JLofA #31, a guy who found an alien machine and used it to create a combination of all the Justice Leaguers so he could fight them with it and rob a bank. Now he's just a guy who's down on his luck and filled with regret, walking down Atlantic City's Boardwalk when he comes across a younger man with long red locks, purple pants, and presumably, an Australian (or Earth-Prime) accent. And the kid's got talent.

It's Ultraa! Amazingly, Joe knows all about him and that he's an exile from a parallel Earth. He must read the supervillain trades. And he believes all of it, no problem. What he CAN'T believe is that Ultraa is slumming it as a super-busboy on the Jersey shore. Offering friendship, Joe convinces Ultraa to help him... rob a bank. So much for both their New Year's resolutions. 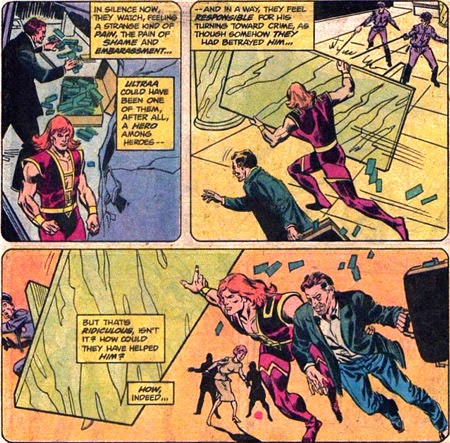 The JLA recognizes him on the security video and that's when the reason why he doesn't exactly work kicks in: 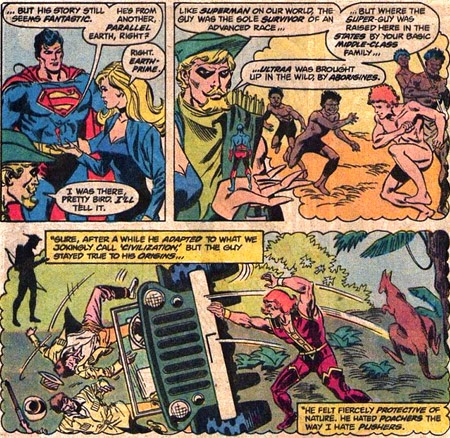 Guys, there are pages and pages of this kind of thing as the various Leaguers discuss his convoluted history. If every appearance just adds to the confusing corpus of stories that must be referenced and explained, there was always a limit to the number of stories he star in in total. While the Leaguers waste time telling each other things they already know, Joe and Ultraa are attacking a casino with giant gambling implements. 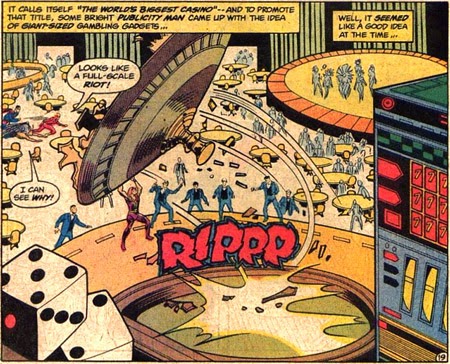 Yes, right, it's got giant stuff because it makes marketing sense. Right. It's not because this is the DC Universe and there's giant stuff just lying around from various Gotham City police auctions, no, not at all. Just an excuse to throw giant dice around and make crap puns. 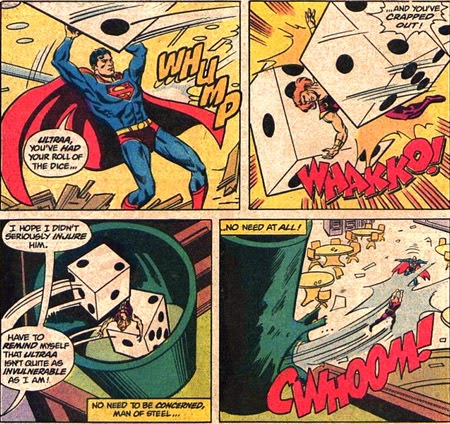 Yahtzee! Superman is downed by his Earth-Prime analog, and the rest of the League falls next. Oh the regret! 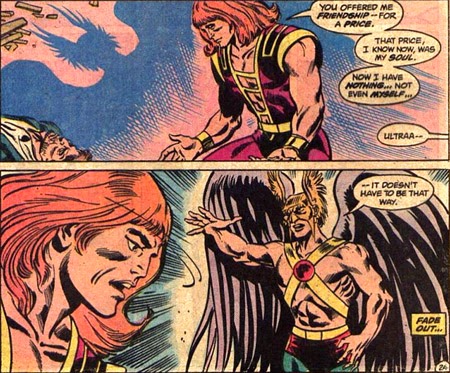 I'm not even sure why Ultraa would have fallen for Joe's spiel. All he wanted was a quiet life; this isn't it. In fact, I'm not even sure why Joe MADE the spiel. In Ultraa's kitchen, he was all about representing the kid in some entertainment capacity; this isn't it and doesn't fit with his own regret about the way he used his "one shot". Well, Joe goes to jail for conspiracy to commit theft, but the JLA let Ultraa go because "he never intended to commit a crime... he was lost, confused... and very lonely." 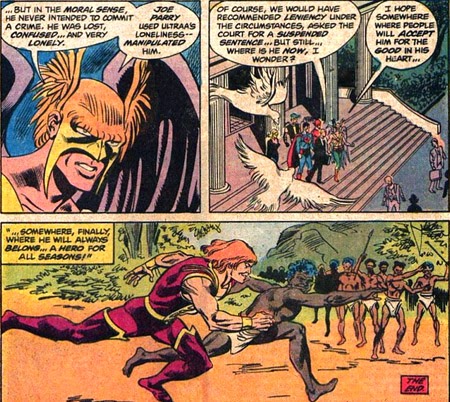 The loneliness defense, eh? That's a new one. I know quite a few disturbed loners who could use that one. So we leave Ultraa and his confusing back story in the Australian Outback, letting Aborigines beat him at sports. Melbourne should could have used him during the Invasion!, eh?

Who's Next? The character I consider possibly the most obscure of Who's Who's entire run.
Comics JLA Who's This?

Erich said…
The most obscure out of all the Who's Who entries? I'm trying to figure it out, but I'm finding it simply unimaginable...
January 6, 2015 at 4:39 PM

American Hawkman said…
Ah, Ultraa. One of my favorites. Making him an exile from Almerac isn't the worst revamping, I suppose. Can't wait to see what Morrison does with him. (I'd forgot Joe Parry even HAD a second appearance after the Panopticon incident...)
January 6, 2015 at 4:51 PM

Siskoid said…
Erich: So obscure, you've completely forgotten the character was even in Who's Who, I bet.

AmHawk: I would expect you to remember the Panopticon story because it's when Hawkman joined the JLA, but I'm surprised you forgot about the sequel given Hawkman once again plays an important part.
January 6, 2015 at 5:04 PM

American Hawkman said…
I definitely remembered reading the story, but I'd utterly forgotten Parry came back for it and that this wasn't just a random guy. I'll note that this is a good example of Hawkman's compassionate side, something that the character tries to hide, but shines through on occasions and gives him levels that a lot of fans miss. One of my favorites for that reason.
January 7, 2015 at 3:56 PM

Siskoid said…
He IS usually played as the ultra-conservative of the bunch, especially if Green Arrow is in the room. But that was quite a bleeding heart on him here.
January 7, 2015 at 5:26 PM