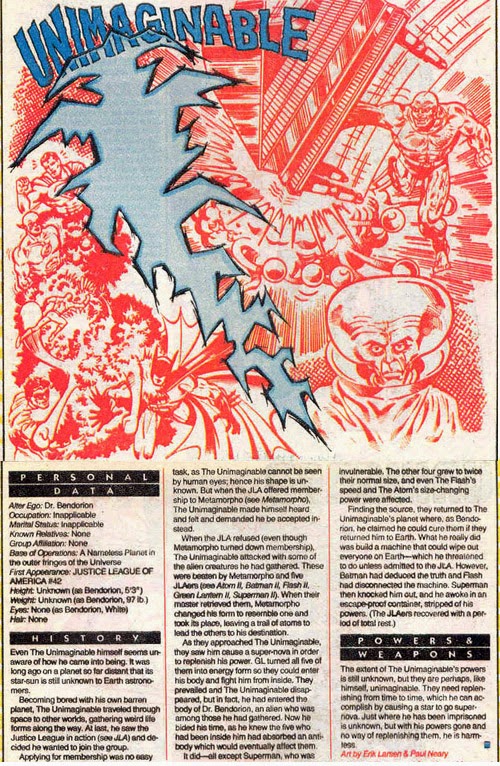 The facts: The whole story is pretty much there in Who's Who's text, which describes the Unimaginable's only two appearances to date, in Justice League of America #42 and #44 (1966).
How you could have heard of it: The Unimaginable returned in 1993 to fight a Green Lantern and Valor in the latter's series (issues 8-10), and then as an important feature of the Supermen of America mini-series (2000). Jeff Lemire has said he was referencing, but not naming or truly featuring, the Unimaginable in the first arc of his Justice League United (2014). Perhaps that reference will be more obvious once we look at an original Unimaginable story?
Example story: Justice League of America #42 (1966) "Metamorpho Says -- No!" by Gardner Fox, Mike Sekowsky and Bernard Sachs 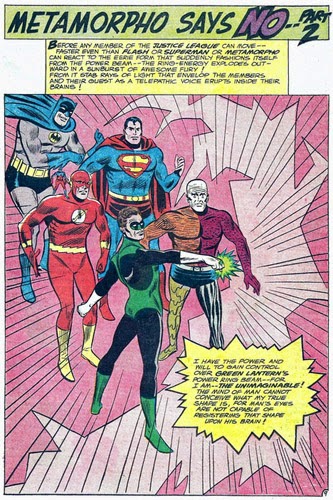 It's possible the Who's Who crew remembered the Unimaginable because he was the antagonist is the presumably famous issue of JLA where Metamorpho is asked to join and - spoilers right there in the title! - declines the invitation. But given that its Who's Who page says it all, is it worth writing a post about it? I say yes, if only because the issue includes the greatest panel in Justice League of America history:

I mean, come on! This is gold! Not a dance contest gone wrong, rather the story begins when Metamorpho loses control of his arms and they write an invitation to the Justice League in the sky, requesting they hold auditions. Rex has no interest in joining the League, but some unknown entity (oh, let's just call it Unimaginable, shall we?) starts beating him up by possessing various objects. IT will be the new Justice League member, and no one else! Meanwhile, the League is indeed considering Rex for membership, so they casually spy on him using Green Lantern's powers, and find he needs help. The Unimaginable summons all sorts of alien creatures to fight the League, until it realizes that, wait a minute, it wants to join them, not fight them, and leaves its future colleagues is various embarrassing positions. There. All caught up. So they do offer Rex a place on the team, but he doesn't want it. It takes a Batman to put everything in perspective though: 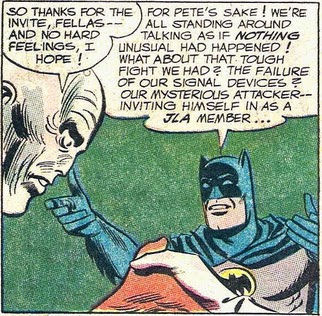 Uhm, yeah. Eyes on the prize, guys. Metamorpho does wonder if GL can use his ring to change him back into Rex Mason though. Hal tries but the Unimaginable shows its hand (such as it is) by taking control of the ring and DEMANDING it be considered for membership. See, it's this big fanboy that's been watching the JLA's exploits since it noticed them during some mission in space. And it'll be damned if Elongated Man, Adam Strange or Metamorpho get the slot instead of it! 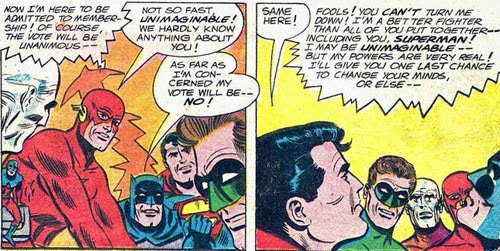 Hm, hasn't the Unimaginable ever read Legion of Super-Heroes stories? You never get in with that attitude. But maybe if it can overwhelm the League with its considerable power, they'll HAVE to let it in. Yeah that's it. So it throws all sorts of powerful alien creatures/forces at them to prove its point. Its other power is arrogant trash talking, pretty considerable, and very good at making losing sound like winning. 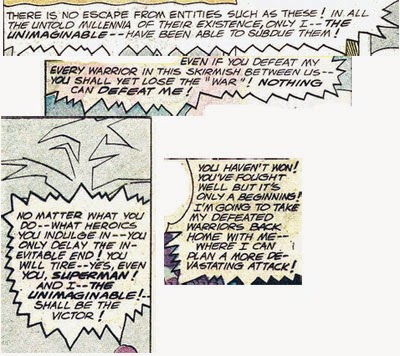 In the end, it takes off with its collection of monsters to lick its wounds and plan for the next encounter. Metamorpho follows, disguised as one of the critters and leaving a trail of bread crumbs, molecules from his own body Superman can detect. They follow to a star system where the Unimaginable is soaking in the radiation from a supernova. It hopes to beat the JLA with a full tank of gas. 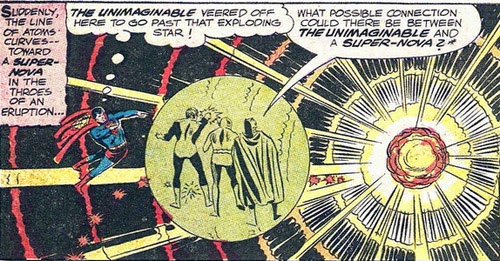 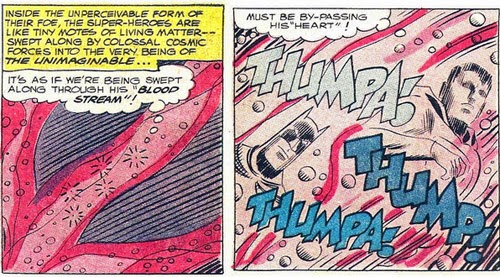 How an unimaginable, imperceptible energy monster can have a biology is anyone's guess, but the Justice Leaguers are evidently rattling around in there (plus Metamorpho, somehow), and start punching up a storm. It can't destroy them unless it destroys itself, and it finally succumbs, turning into a shadow and disappearing. Unharmed, the Leaguers are restored to solid form by GL...

...who then vacuums the bread crumbs back into Rex's body. So NOW can GL turn Rex back into a human being? Well no, because the Orb of Ra probably had some yellow radiation coming out of it or something. So Rex becomes a "stand-by" member and spends the rest of the Silver Age sitting by the phone.

Does the Unimaginable have potential? Well, he's too nasty to be a nuisance à la Bat-Mite or Mopee. And too powerful/haphazard to be a viable long term villain (though a lot of Gardner Fox creations are like that). He reminds me of the Weird in some ways, and could work as a misguided "hero" if he were given humanoid form. I dunno. I guess not.

Who's Next? It's been a long road through Who's Who #24. The next issue has fewer obscure entries, but I can think of 2 or 3. Can you?
Comics JLA Metamorpho Silver Age Who's This?

American Hawkman said…
I'll note that in his Valor appearance, he also fought Snapper Carr's Blasters team and seems to have taken special malice in scattering them throughout the universe, probably annoyed that Snapper was in the League. He makes for a good cosmic force with motives that are literally unimaginable.
January 20, 2015 at 5:53 PM

American Hawkman said…
Both, really. He's the Beyonder decades before the Beyonder was created.
January 20, 2015 at 7:25 PM

Jeremy Patrick said…
The Unimaginable would have been perfect for certain iterations of the Doom Patrol. Oh tragic fate, what mockery you make of us mortals!
...
Despite what Captcha says, what if I WAS a robot? Wouldst thou turn me away?
January 21, 2015 at 4:33 PM