February 12, 2015
We've looked at the Generic Universal Role-Playing System's licensed and historical books, so let's take a gander at the genre books. GURPS prides itself on its ability to simulate any type of RPG and covering all genres is integral to that. Some see a little more love, with additional sourcebooks on tech/items, NPCs/races/monsters, and ready-made settings/atlases, and I did let that play a role when selecting my 5 favorites, though the core genre book had to be strong when used on its own. Some feature settings, at least as examples of how to use the book, but they aren't the focus. I'll do a post on original settings next week, don't fret. 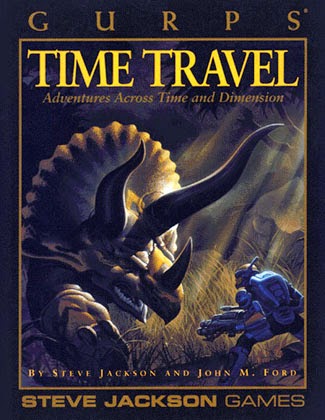 Time Travel
Adventure Across Time and Dimension
I LOVE this book. On the one hand, it's one of those gateway sourcebooks that allows you to use tons of other GURPS books (if not, in fact, all of them), but its discussions of paradoxes and various other issues related to time travel are excellent. A good read even for non-gamers! The book includes various time travel settings, the most developed of which - a kind of Time Patrol set up - has found sensible and innovative ways to get around the whole paradox issue. The others offer a lot of variety in just how you get around space-time, though you'll have to do a little more work. And bonus: The book also includes detailed rules and a setting for Dimensional Travel. This is another super-interesting read, clever in its approach. Supplemental reading: A cool Adventures book, GURPS Timeline to get your dates and hot spots straight, Alternate Earths 1 & 2, and practically every book ever published under GURPS 3rd. 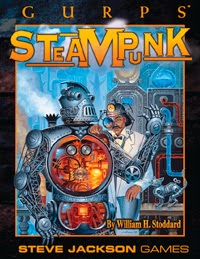 Steampunk
An Age of Discovery
How else am I gonna do my League of Extraordinary Gentlemen campaign? The Steampunk book is a very fun volume full of mad science, retro-tech, and dark continents. What's surprising is that the book doesn't limit itself to Victorian settings, though it is admittedly its focus. There are actually some alternate options, setting rampant industrial revolution and "punk" angst in other eras, and cleverly too. In other words, GURPS Steampunk makes sure it IS a genre book by expanding outward from its natural setting. The art is nice too, a cool blend of new and period illustrations. Supplemental reading: Steam-Tech, which is really a must. It seems that "Punk" settings must, per force, have a technological bias (think if Cyberpunk), and Steampunk is no different.

Atomic Horror
Science Runs Amok in B-Movie Adventures!
A strange blend, GURPS Atomic Horror is at once a guide to the 1950s suitable for any style of campaign, a sample setting where the PCs' organization fights radioactive monsters and alien invasions, and a genre book simulating the B-movie science-fiction and horror films of the '50s. In the latter sense, very much a genre book. It's a very cool idea, one that can cover every tone from comedy (Plan 9 from Outer Space) to paranoid terror (Quatermass), and though the art is perhaps only serviceable, it still manages some loopy fun, like Hitler planting a Nazi flag on the Moon. Five new alien races suitable for this kind of retro-SF are detailed, and a good bunch of monsters. I do wish there were more of a focus on kaiju, but that should almost be its own book. (Where's my GURPS Pacific Rim?!) 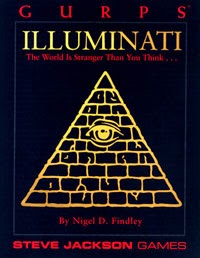 Illuminati
The World Is Stranger Than You Think...
Today, there are several conspiracy-type RPGs, foremost in my mind Over the Edge and Unknown Armies. Might GURPS Illuminati be the first of its kind though? I suppose there are shades of Call of Cthulhu and Paranoia in there, but it's not the same. What Steve Jackson Games has done is take all the research they'd done for the Illuminati card game and expand it into a solid sourcebook about every gonzo conspiracy theory known to Man (and some not known to Man). How to develop a conspiracy is described in detail, after which you'll have to decide how close the Player Characters are to the center of the web. Plenty of GM advice to help you make those choices. The book is informative, even fascinating, and it's funny too. It wasn't clear to me at the time just how to run an Illuminated campaign, but my reading has caught up with this book since, and I'd love to do something à la Robert Anton Wilson some day. Supplemental reading: Kenneth Hite's Suppressed Transmissions are a great source of ideas even if they aren't necessarily put into gaming terms. Warehouse 23, Y2K and Black Ops also fit right in.

Horror 3rd Edition
What's That Behind You?
At some point, GURPS decided it was a good system to run horror. It issued a new edition of its Horror genre book which has almost NOTHING to do with the previous edition (consequently, I own both), a GM screen to go with it (very rare for GURPS), and lots of splat books about monsters with the same painterly aesthetic, heads and shoulders above most GURPS fare. It very much became a sub-line. And seeing as the system can be rather deadly and gritty, yes, I agree it can do horror quite well. So what's in the sourcebook? Discussion on every type of horror story, from gore porn to subtle psychological horror; advice on how to create and run characters within the genre; a "monster manual" of sorts, featuring as many classics as modern terrors; and three completely different campaign settings. (The previous edition looks horrid instead of horrifying, but presents different, more details and ultimately less intriguing settings, or eras really, in which to set horror scenarios.) Supplemental reading: One of the best reasons to recommend this genre book is that GURPS has published so many cool companion volumes either presenting new monsters (Undead, Blood Types, Spirits, Monsters, Creatures of the Night) or settings/locations (Cabal, Voodoo: The Shadow War, Screampunk, Places of Mystery).

It's possible you're choices would be very different. I'm not big on crunch and tech, and it shows. I do have a soft spot for GURPS Mecha, having played a pretty fun mini-campaign with it, but the book loses me with those damned Vehicles rules. Similarly, I'm not big on guns and military campaigning, so Special Ops, Covert Ops, etc. doesn't really interest me. Espionage could have had a shot, but the book is a little dry for my taste; same with Space. Cops almost made it onto the list, as did Cliffhangers. Supers has always been an odd fit given GURPS' grittiness, though I do like the supplemental material Steve Jackson Games put out. All of that to say there's lots to love, even among the books I didn't single out. Tell us your favorites!
RPGs

Jeff R. said…
I have to go for the big two that put the G into GURPS: Space (Either the last 3E version or the 4E one) and Fantasy (The 4E one since the 3E wasn't a Genre Sourcebook.) And maybe WWII:Weird War II; which feels more like a (very niche) genre book than any other category.

Siskoid said…
I like Weird War II too, but then I would.

Anonymous said…
Cliffhangers was always my favourite...I just love the *feel* of it. I also liked the Alternate Earths (which kinda ties into the Time Travel books, as you mentioned).
February 12, 2015 at 10:17 PM