February 04, 2015
Last time I took my GURPS collection out, it was to talk about my favorite sourcebooks detailing licensed properties in GURPS terms. This time, I'll just be looking back in time at the various historical settings Steve Jackson Games published. Some I've used in games, others I'd really want to in the future if the right group of players could be assembled. The books you WON'T find on the list are those that read like dry textbooks on history. These should be role-playing settings FIRST; dates and facts aren't always useful when trying to convey the flavor of a setting to players. They'll only care about dates if they're time traveling, probably. So let's get to it, here are my five favorites from GURPS' extensive collection.

Celtic Myth
Isles of the Mighty
Let's break the rules of the "historical" right away with a sourcebook that has "myth" right in the title. Is this really history, or should I have classified it as fantasy? Well, those legends have to have SOME basis in fact, right? In any case, most historical settings use the world view of their respective eras, and if magic was thought to be "true", then it is. Most of these books have new spells, monsters, etc. in case the GM wants to put a more fantastic spin on the setting. Celtic Myth perhaps more than most. Still, this is one of the few GURPS books I read cover to cover, all in one go. It's fascinating. A coherent fantasy setting that's quite unlike any of the better known old world mythologies, Celtic Myth gives you a system of prophecies and taboos that rule of the lives of your heroes, a druidic magic system, characters who might have Faerie blood, and lots more, never forgetting the traditions and mores that will give such a campaign its distinct flavor. One of those settings I'd love to play with some day. 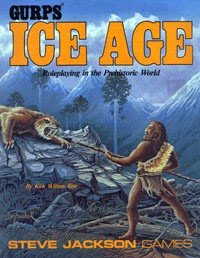 Ice Age
Roleplaying in the Prehistoric World
Let's break another rule. Prehistory isn't history, we all know that. Still, this is a setting pulled from humanity's past, and I have nowhere else to put it. And this one I've played and loved. A thin sourcebook filled with Donna Barr art, Ice Age looks, I think, better than most early GURPS books. I've gone on record before saying I love the challenges associated with primitive role-playing (both for players and GMs), amd this is in many ways the ultimate expression of that. Not only is equipment limited, but so is the PCs' understanding of the world. This is a setting where characters can only count up to 5, so anything more is "lots", and the GM is encouraged to describe the world in such mysterious terms. When we tried it, the players really got into it. Perhaps not something for a long-running campaign, but the live-fast, die-young nature of the era would make a cool mini-series. The book even provides you with your first adventure scenario. AND a wink to the Flintstones ;-). 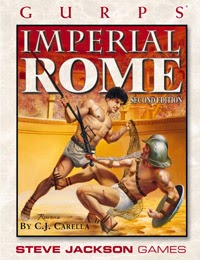 Imperial Rome
Let the Games Begin!
While not a perfect sourcebook - it suffers from amateurish art (my first edition anyway), like a lot of GURPS books, despite the excellent cover - Imperial Rome does the one thing I demand from historical RPG settings. I tells me what it was like to live there. I don't need the book to tells me who was Emperor from year to year (especially with the advent of Wikipedia), but I do need to know what Ancient Romans ate, what fashions they followed, how they practiced their faiths, and this book does that. It also takes a good look at Roman Legions and the arena, two avenues for adventure synonymous with the era, with rules for chariot racing and the like. Today, I'd probably supplement it with a review of HBO's Rome, putting images to what's described in the book, but the basics are definitely there. 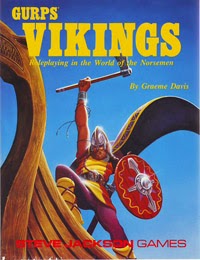 Vikings
Roleplaying in the World of the Norsemen
Before Celtic Myth, there was GURPS Vikings. Though Celtic Myth remains a unique setting, there are some resemblances (the way characters may be "fated", for example), but of course, Vikings are better known and therefore more accessible. Like Imperial Rome, Vikings does a good job of detailing the culture to create a lived-in world that's more than dates and lists of leaders. Whether you're reenacting Beowulf, or going to America in a longboat, or playing King-Board to a Troll lord, the sourcebook has your back, and I've used it to successfully campaign in fantastical Scandinavia. Even as a primer to Viking history, it doesn't feel dry, and several maps show the surprising extent of Viking trade/pillage routes. And I love the various Viking proverbs provided, they really get the Viking point of view across. 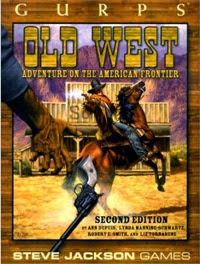 Old West
Adventure on the American Frontier
I'll end on my very first GURPS campaign. I love a good western, but I never thought I'd love Western RPGing quite this much. What you want with something as iconic as the American Western is a book that'll give you rules and advice on all the classic tropes, and also allow you to expand on what you've seen in movies. Consequently, Old West makes sure you get all those bits - train robberies and cattle rustling and showdowns - but also less traveled paths like thre Civil War and a whole chapter on Native Americans. Back to that original campaign, it was going to start in the Old West and then go all genre mash-up/time travel, and we followed that plan, but we sure were sorry to leave 19th-century Montana when we did. The art on the 2nd edition is varied and quite good, incorporating old illustrations into the mix.

If I had to give an honorary mention, it would go to Russia, simply because it's an unusual setting you don't see a lot of in the role-playing arena. And when I get around to reading more of it, it might end up on this list. There are settings I WISH I could put on here, but that, in my estimation, failed to capture the necessary historical (or mythical) flavor, books like Egypt and China. Others, like Japan, I found too limited in scope. But perhaps you liked them more than I did. Or would name Aztecs or Arabian Nights or Age of Napoleon as your favorites. Let us know in the comments section. Any fans of history/historical gaming out there
RPGs

Jeff R. said…
I found the WWII line all good. And, for a couple of other 'on or beyond the edge of the definition but still with non-insignificant Historical Content' picks, Atlantis and Falkenstein:Ottoman Empire.
February 4, 2015 at 2:59 PM

Siskoid said…
World War II was a bit crunchy for me, but I liked its commitment to less explored elements/theaters of the war.

For borderline historical, I'd also give a shout-out to Scarlet Pimpernel.
February 4, 2015 at 3:12 PM