Who's the Warlock of Ys? 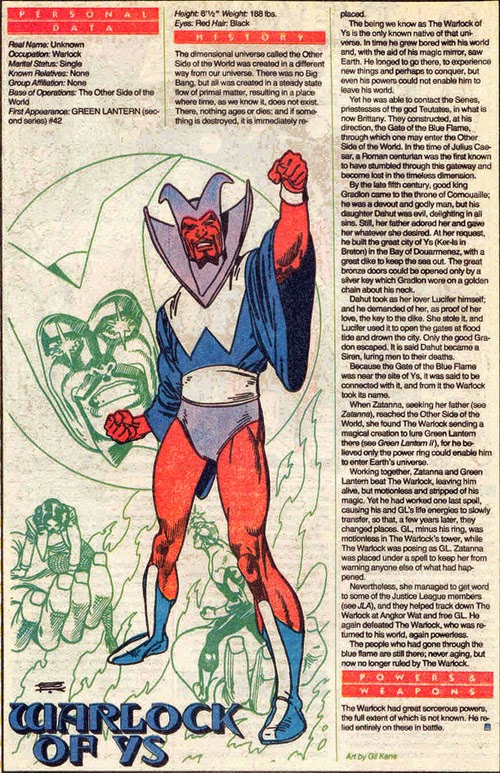 The facts: Created by Gardner Fox and Gil Kane in Green Lantern #42 (1966), he would only appear once more, and in very few pages at that, before his Who's Who entry - in Justice League of America #161 (1978).
How you could have heard of him: The Warlock has resurfaced since in modern JSA comics, first in JSA #54 (2004), allied to another also-ran Kulak; and 2008's Brave and the Bold #9-10. He was glimpsed in the New 52 as one of the interdimensional beings imprisoned by A.R.G.U.S. in Vibe's series. Otherwise, he's mostly been a cameo in accounts of Zatanna's history.
Example story: Green Lantern vol.2 #42 (1966) "The Other Side of the World" by Gardner Fox, Gil Kane and Sid Greene 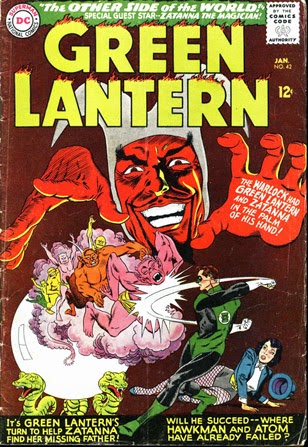 There's so little material, I had to go back to the first story, and found he wasn't very much in it at all, at least in the flesh. It's looking more and more like the Warlock of Ys really didn't deserve his spot in Who's Who. The classic Gil Kane art making me think he's a classic Green Lantern villain is totally misleading. In fact, this is much more Zatanna's story than it is Hal Jordan's, though she takes her time showing up as well.

It all begins with a weird moment: Hal recites his oath and it comes out of his mouth in Zatanna's reverse speech. Still, the ring charges up fine, and off he goes to fight a big pirate with magic powers called Patch-Eye Pete. During the battle, Hal's bacon is saved a number of times by the ring exhibiting unusual abilities, including some power over yellow objects. Well, it's all thanks to Zatanna who cast a spell to lend GL some of her magic.

This is very early on in her career, and it's the first time she ever meets GL. She's been going from one Julius Schwartz book to another (Hawkman, then Atom) looking for her dad Zatara, each clue leading her to the next. Her quest had brought her to the drowned mythical city of Ys (in the Channel) where warriors from across history had been known to disappear. Ys, in fact, is a magical dimension where time does not pass, and where the Warlock is the sole native, so he HAS to have an aggressive immigration policy.

He came into being at the same time as his universe and has gotten pretty bored over the not-really-advancing years. Why not move to Earth? He needs a powerful artifact from our space to do that, which is why he sent the the pirate - a historical warrior he's picked up - to tangle with GL. Teaming up with Zatanna, Hal goes to Ys to help her get answers from the Warlock. But on Ys, her spells don't work and neither does his ring. In fact, he may just have played into the Warlock's hands. 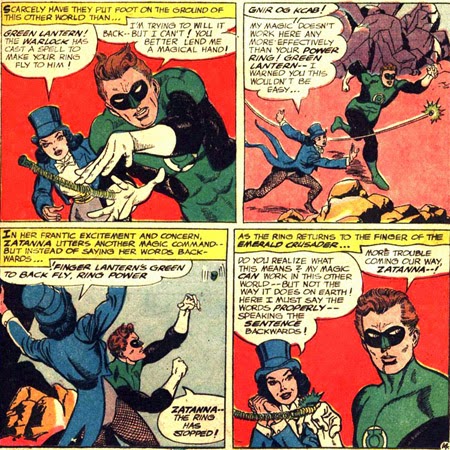 Ah, but Zatanna's magic DOES work, just differently. Reverse word order, not letter order! Good instincts, that one. Maybe someone should ask her to join the Justice League. She's even useful in fighting the assembled army of time-tossed soldiers and the horde of summoned demons the Warlock throws at them from his castle keep. The fight's pretty much won when GL finally realizes how to make his ring work on Ys:

Yes, Zatanna, that's the very same kind of switch (no it isn't). Speaking of switch, Green Lantern then up and offers the Warlock his ring. He feels justified.

Finding Zatanna's dad vs. keeping the world unsubjugated by a mystic despot? No brainer for a no brainer, am I right? Or am I right? Oh, stop your fussing. This was the Silver Age when heroes knew exactly what the other was thinking without having a conversation, so this was all a ploy to trap the Warlock on Ys. 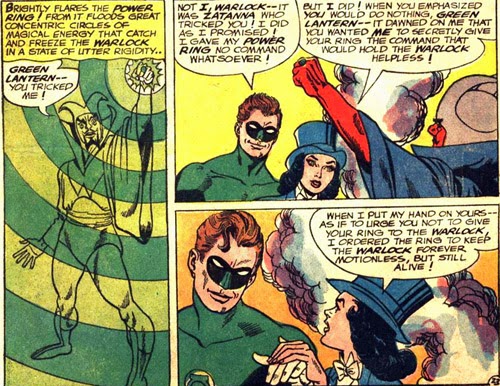 See? They explain it. All that matters is that he tells Zatanna where to go next on her wild goose chase. And after less than four pages of action, the Warlock is QUITE LITERALLY left to collect cobwebs. 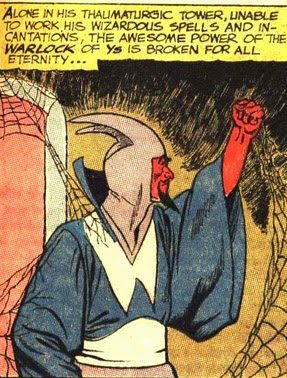 Until JLA #161, that is, when we learn he put a whammy on GL in that moment, allowing him to eventually escape and spend some time as Hal's doppelganger, something that nets him a whole extra two pages of "screen time" during which they forget he has red skin. And that, folks, is how the Warlock of Ys made it into Who's Who in under 6 pages. And Zatanna? She would end up joining the Justice League in that issue. Oh, and in GL #42? Hal would make a pass at her.

The Warlock of Ys could have had more appearances. I mean, it's not a bad look, and a wizard trapped in another dimension, but sending armies from across history across the threshold is a concept that could have worked well with a variety of heroes, or even the Justice League itself. Maybe giving him a page in Who's Who was a way of repairing the oversight, but no one really took the bait...

Who's Next? Before leaving volume 25, we simply must take one last dip in the Golden Age.
Comics Green Lantern Silver Age Who's This?

American Hawkman said…
I always liked the Warlock of Ys, and will forever be surprised by the fact that Johns chose to use him and Kulak, both extremely heavy hitters, as comic relief in that Thanksgiving issue. I would love to use his realm to bring back some pre-modern era heroes myself.
February 10, 2015 at 7:39 AM

Timothy S. Brannan said…
I also always thought the Warlock of Ys was a good foe for Zatanna. He does have a good look.
February 10, 2015 at 8:09 AM

Siskoid said…
That would be a great use for him, AmHawk!

I can understand how some villains became silly when adapted for the modern age (see Justice League Antarctica for example), but there really isn't enough to the Warlock to warrant that reputation.
February 10, 2015 at 9:24 AM

American Hawkman said…
Genuinely, a team-up between the Warlock and Kulak should be an extinction-level event. Not a three panel joke. :)
February 10, 2015 at 10:07 AM