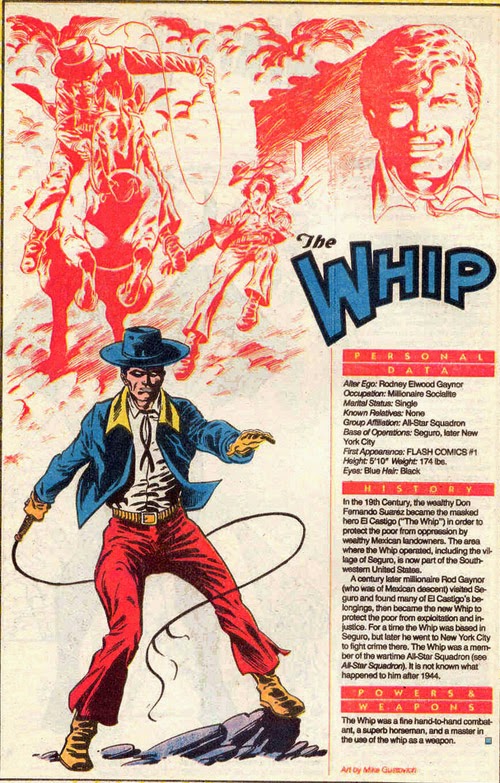 The facts: This Golden Age hero appeared in Flash Comics #1 through #55 (1940-44), which is a pretty long run for a character you've probably never heard of. He even got the cover of #4! Created by John B. Wentworth and George Storm, Homer Fleming would soon take over the art and remain on the strip to the end. Roy Thomas did use him in All-Star Squadron and Young All-Stars in the '80s, but never in too big a role. He may be best remembered for nevertheless getting his turn in Secret Origins #13 (1987).
How you could have heard of him: Rod Gaynor's legacy survived in the form of his granddaughter Shelly, who became the Whip that worked with the modern version of the 7 Soldiers of Victory, or at least, the team that was massacred in the #0 issue preceding the series of mini-series.
Example story: Flash Comics #1 (1940) by John B. Wentworth and George Storm

Granted, most of the story do not look like this because of the change of artist, but I find George Storm's style so distinctive, I had to pull from his short run on the strip. So why not start at the beginning? It's also 4 pages longer than most of the stories. But then, it's got the origin story AND a short tale featuring the ORIGINAL Whip, known to his Spanish-speaking friends and foes as El Castigo. Essentially, the original Whip is meant to stand in for Zorro, using his weapon and mask to steal from the wealthy rancheros and give to the poor. 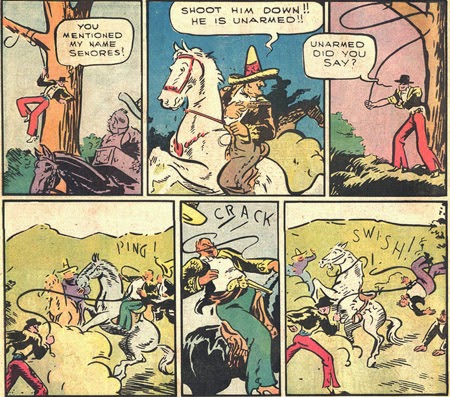 And judging from his witty repartee, he was as smart as a whip too: 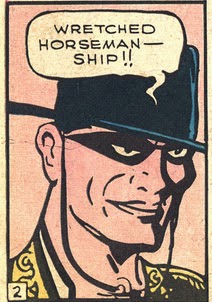 100 years later, in the 1940s, all the treasure he stole has never been found - it's been given to a church so it can be distributed to the poor, but the money's finally running out - and El Castigo has fallen into legend. Yet things haven't changed very much for the oppressed migrant worker, and in a story that feels sadly contemporary, the area (now a town called Seguro in the American Southwest) is perpetrating a war on poor Hispanic workers, denying them employment, forcing them into dire circumstances, and railroading them to trials that turn them into free hard labor. These aren't illegal immigrants, by the way, there's no talk of this. These are American citizens facing racism and exploitation from wealthy ranchers and a sheriff on the take. Lady reporter Marissa Dillon takes up their cause.

Now if only she can convince her dad, the Segura Sentinel's editor-in-chief, to believe her conspiracy theories... Cut to Long Island, NY, and rich dilettante Rod Gaynor. And his horse King, he's important too; both are very good at polo. Can you smell the foreshadowing? 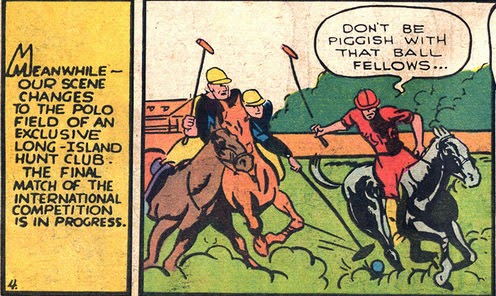 Bored with his lifestyle, Rod decides to take a trip with King and their manservant Wing, not to be confused with the Crimson Avenger's chauffeur/sidekick. In fact, it's Rod who's the driver in this couple. But will Rod become the Whip, or Two-Face? The whole trip looks like this:

Europe or the U.S.A.? North or south? It's the coin that leads him to Seguro, and to whatever restaurant, and that's where he sees Marissa and falls for her. Because the idle rich don't have anything to do, really, he accompanies her on her investigations, and simultaneously sharing her fears that the ranchers' slapdash evil will get a migrant worker lynched, and inspired by the legend of El Castigo, he becomes the new Whip.

The local baddies think they're seeing a ghost, but no, they're actually seeing a white man on a polo horse doing a terribly racist Spanish accent. This was soon dropped, thankfully, but quite beyond the bullwhip, which is a fine weapon, Rod's biggest advantage is his horsemanship. 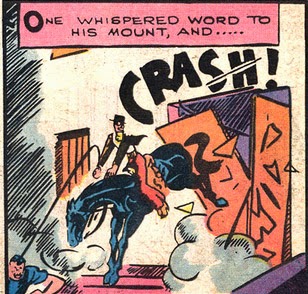 From what I've seen, King will do all sorts of crazy tricks, including jumping off buildings (after the Whip moves back to New York, where he's a total ana-place-ism). He's the real star here, and should not be confused with The King, another masked hero whose strip appears in Flash Comics. But will anyone recognize the champion polo horse since he ISN'T wearing a mask?

Hmm... Secret identity doesn't seem so airtight, does it? Rod should have checked with Superman before taking up the superhero trade. Clark could have told him never to fall for a journalist; they can be a real pest in these circumstances.

So what's the verdict? Too derivative of Zorro? Or is that exactly why the DC Universe should make use of the character? I mean, he's pretty badass here. I wouldn't mind seeing him hanging around again (or his granddaughter, though the female character with a whip is a bit of a cliché now).

Who's Next? Okay, now we're moving to the last issue of Who's Who's first series. Given it features characters they forgot about after the letter "Z", I dare say it'll prove fertile ground for these posts.
Comics Golden Age Who's This?

American Hawkman said…
True. I've wondered, based on him being a bored millionaire from NYC, if he and Hawkman knew each other prior to either taking up a costume.
February 18, 2015 at 1:00 PM