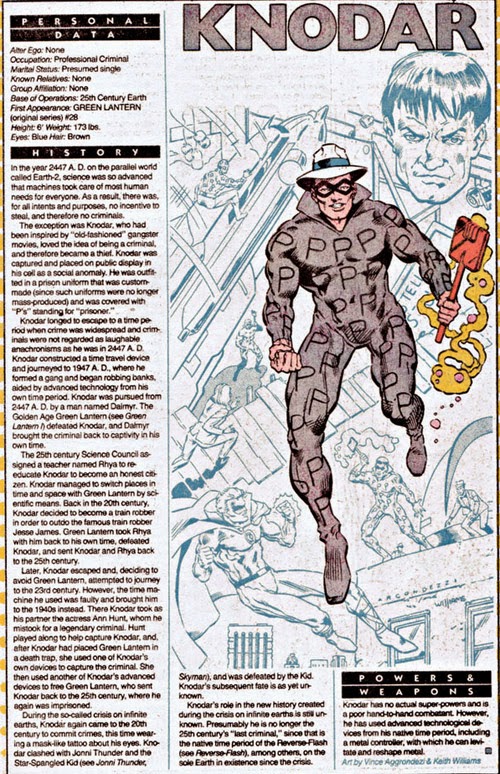 The facts: Knodar annoyed Green Lantern Alan Scott in the Golden Age on a coupe of occasions, starting with Green Lantern #28 (1947), with return engagements in #30 and All-American Comics #100 (both 1948). He appears at the tail end of Who's Who thanks to recent appearances in Infinity Inc.'s 1986 Crisis on Infinite Earths crossover issues, #23-24. He was created by John Broome and Irwin Hasen, and may God have mercy on their souls.
How you could have heard of him: Though he has appeared in the background of Roulette's club in JSA #28 (2001), his only major role was as the foil in World's Finest vol.3 #2 (1999).
Example story: Green Lantern vol.1 #30 (1948) "The Last Criminal Gets an Education" by John Broome and Irwin Hasen 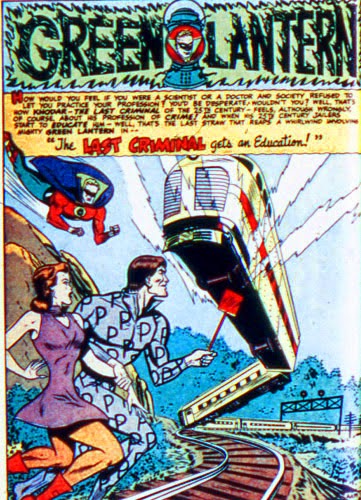 Well, looky here... The anachronistic fedora is an affectation he picked up in 1986 under Roy Thomas' pen. The Golden Age original never wore one. Huh. Anyway, the story starts when, through a feat of far future science, Knodar and Green Lantern Alan Scott switch places in time and space. GL sidekick Doiby Dickles barely has time to react when he's zapped by an equally futuristic brain-ray that turns him into an unwilling puppet. One who knows which Guinness world records to beat.

Dethrone Jesse James as history's greatest train robber? I guess that's one way to screw with the time stream. Meanwhile (if that word has any meaning in this context), Green Lantern finds himself in a cell in the far future. He soon convinces Knodar's hot school teacher Rhya that he isn't the "last criminal" in disguise, and uses his ring to get both of them back to the 1940s to apprehend him. 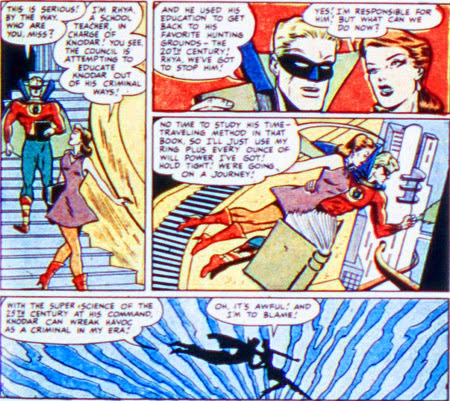 Rhya has learned her lesson about lending Knodar books that explain how you can time travel, and we're sure this won't happen again. Knodar's other new trick is his flyswatter/metal controller and he uses that to bend train tracks and axe any opposition to his plans.

GL intervenes after Doiby Dickles manages to trick Knodar into activating his signaling device, but the two are too evenly matched and Knodar escapes. GL and Rhya figure out the next crime will involve a luxury passenger train, and go undercover aboard. And on cue:

But meat-puppet Doiby recognizes Alan and tells him what's going on (Knodar has no control over his mouth, clearly). But Knodar grabs Rhya and uses her to cover his escape. GL is in pursuit when... 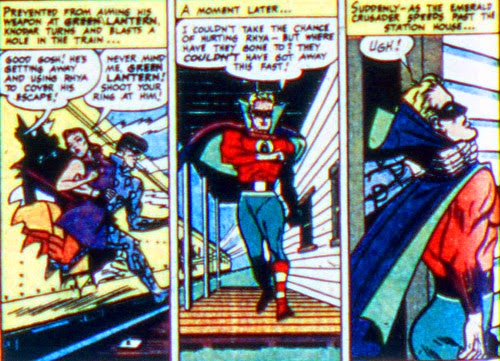 ...he gets choked out by the last criminal. I wasn't expecting a vicious streak from him! But he's still a crazy supervillain, so instead of killing GL right then and there, he ties him and Rhya up to a stove in a train station, and wires the stove to the tracks so that the next train passing will throw a switch that will electrocute them both. Look, dude, you lost me at stove. In any case, GL pulls a James Bond and gets out of it by using his ring  to turn on a red signal light that stops the train - yes, instead of using the ring to cut their bonds, and no, Knodar didn't disarm him while he had the chance. An over-complicated supervillain plan deserves an over-complicated superhero escape. And speaking of over-complicated, Doiby leaves a clue to Knodar's next caper: a fish drawn on a wall. So OF COURSE it has to be an attack on railroad president J.F. Salmon! Duh! And off they go to rescue the old man. Once again, the two men's weapons cancel each other out, but it's not all about the fancy rings/flyswatters, you know. 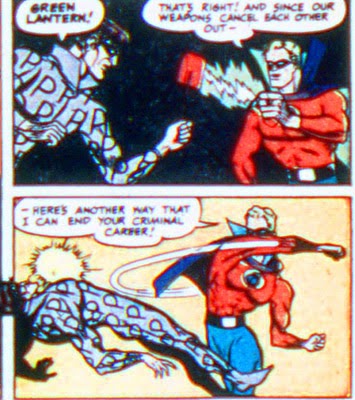 Green Lantern is BUFF for a reason. And so Rhya takes him back to the future and his re-education sentence, leaving Doiby to wonder if he's still under Knodar's control while Alan Scott makes a quick exit. "Yeah, I don't care about your pangs of existentialism, Doiby. See ya!"

So does Knodar deserve return engagements? Well, if he had a new suit, perhaps. The idea of a time traveling criminal who wants to outdo history's isn't bad, and there's the still-waiting-to-be-told tale of Knodar fighting Abra Kadabra for future criminal supremacy. But I'm in hurry. Are you?

Who's Next? We're done with volume 26, but not with this series of Who's Who. I went a little fast in the early days, and skipped over characters that deserved better. If you have any requests, I'll gladly entertain them too.
Comics Golden Age Green Lantern Who's This?

American Hawkman said…
Him being from the Reverse-Flash's era is a thread that needs explored.
April 14, 2015 at 5:35 PM

JeffJedi said…
By far one of the oddest looking characters. As a kid I never read his profile and just assumed he had a spatula with some kind of yellow taffy on it as a weapon.
April 18, 2015 at 2:41 AM