RPG Talk: The Game Is the Story, Not the Reality 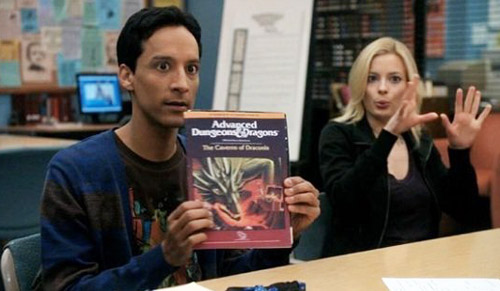 So I was talking to one of my players this week and it got a little meta-textual. He was referencing someone else's house rule that super-critical successes (such as triple-acing in Savage Worlds) become ingrained in the mythology of the campaign world. While that sounded cool on paper, we chuckled remembering the triple+ ace his SW Evernight character had scored slamming a big heavy shovel on a swarm of rats, killing several dozen in the span of a few minutes. Would that be his "mythical" legacy? I'm sure historians will be arguing about it for centuries.

Well, I say yes. Sure, it was a low-level encounter early in the career of a character who would end up on the campaign world's throne, but it can still be the thing everyone talks about. The day the future king rid the kingdom of rats with one mighty swing. If it's going to be mythical, then lay it on thick.

And that got us talking about the gaming session as a STORY. Now obviously, I'm well-known as one of those filthy Narrativists who sees role-playing games AS stories, and puts story well above simulation and adherence to strict rules, but I'm not talking about that. Over the course of any session, there will be many moments that break the illusion of an immersive world. The players are always joking around, of course, and saying things that are out of character, but there'll also be crazy dice rolls or even game rules that will create illogical moments of both success and failure.

And there's the realization. The game isn't what's really happening in the game world; it's how the story was later TOLD. Probably by the characters themselves, possibly by witnesses, but it's one way to explain the gaming experience, and much closer to what's actually happening. After all, what's an RPG session if not a bunch of friends sitting around a table laughing and telling tall tales? 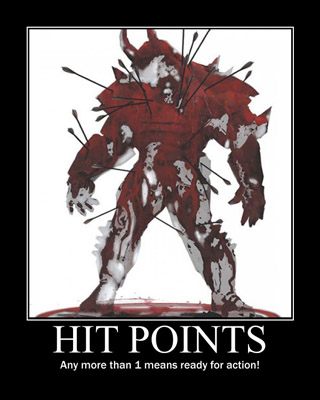 From that perspective, illogical rules like D&D hit points are just characters writing off wounds as mere scratches in their story. They don't dwell on specific damage unless they have a cool scar to show for it. That critical success? Who decides it's "critical", except the storyteller, exaggerating for his audience? And why not do the same with critical failures? Self-deprecation is good for the soul. Alignments? Who really thinks like that? But it's efficient to give your ideology a name (see almost any political party). Who's that stranger who just joined the party? Oh we don't need to go into the details of his back story right now, campfire listener! And all the jokes? Sprucing up the narrative with humor. The bits that aren't so funny where the PCs shop for equipment or explain in detail their camping plans? Some storytellers are boring and tedious indeed! Even the dice rolls can be viewed as drum rolls to create suspense.

All very interesting, but how can that notion be used in games? On the surface of it, it's a magical No-Prize that helps explain away inconsistencies. Instead of having a dispute at the table about the name of some obscure NPC, or whether a house rule was changed, or what have you, gamers are invited to chalk it up to the story as (badly) told. But enterprising gamers can be more proactive with it. If it IS just a story being told, then Narrativist tricks can be inserted into games that don't normally use them (oh, I done and tricked you now): Flashbacks, flash forwards, rewinds to reveal new information that changes the objective present, calling characters out on their lies and rewriting scenes, all sorts of meanwhiles and elsewheres.

The "Tale" could even become the basis for a replay of an adventure, this time telling the "truth". How would that gaming session look with the PCs more flawed, and the dangers not quite so dangerous? Have an extra 20 minutes at the end of a session? Run a scandalous replay where everything's really, really mundane. It's a hoot!

But I see I've gone too far...
Advice RPGs

Tim Knight said…
Thanks for opening that can of worms. In all my years I've never thought to looking at gaming this way, but now it makes perfect sense!
June 23, 2015 at 6:44 AM

Anonymous said…
"From that perspective, illogical rules like D&D hit points are just characters writing off wounds as mere scratches in their story."

Back in the day, our interpretation of hit points was, most of them didn't indicate an actual wound, but the character having narrowly dodged a wound through training and focus. But after a while fatigue sets in, adrenaline starts messing with fine muscular control, and you can't focus; you're just not as good, and as your hit points reach the bottom, that's when the actual wounds happen.

Siskoid said…
Yes, I refer to it as fatigue too.

Anonymous said…
I have been in a couple of game session that used either storytelling ("Tell us about the time that . . .") or a report before a board of inquiry ("Explain the event that happened when . . .") which were quite fun once we got into the metanature of the game.
June 23, 2015 at 5:47 PM

Brian said…
Not as a hard rule, but groups I've been involved in in the past have used "super-criticals" as elements that change the story before. One group, doing a mega-campaign that rolled over through a few versions of D&D and a few generations of Dragonlance characters, was testing a variation of continuing to roll again for multipliers if the confirmation roll on a crit was also a 20.

A few low-level characters are sneaking into the cave of the ancient red dragon that's going to end up being the final boss to save an NPC who the story dictates we don't get to save, given the dragon's power and backup. My LG monk, however, opts that leaving an innocent behind isn't an option and instead pulls the sacrifice play against a creature who is insanely beyond his ability to fight. I manage to dodge around the cave and distract the dragon long enough to let the rest of the folks escape, miraculously dodge one attack, then counter and actually score a hit – a critical hit that I roll a series of twenties on. Given the rule we were playtesting, I did enough damage to have killed anything in my actual CR...but just enough to piss off a creature this much out of my depth. The DM magnanimously ruled that I actually punched out a centuries-old wyrm's eye, as I was bitten in half down to -50 with one attack.

Flash forward two years, as the much more-advanced party is finally facing down the dragon and his army in major combat. With half the characters down and the forces of evil looking to eke out a victory, the tide suddenly turns. As our Knights of Solamnia keep flying forward and getting batted away, the one assassin in the party sneaks around the side where he reminds the DM – to the DM's chagrin – that the dragon has a blind spot where the monk left him damaged and strikes him the crippling blow.

Unknown said…
Fate Core handles injuries in the most story-driven fashion I've ever come across. Thats because there is no damage in Fate Core- stress and consequences. Players' characters don't die unless a player chooses to die.

You take consequences as a cost to remain in a conflict. Otherwise, you just lose the ability to decide which way the conflict can go.

There is a load more to explain in relation to Fate Core, but it does scratch the narrative-extreme itch if you ever get it.