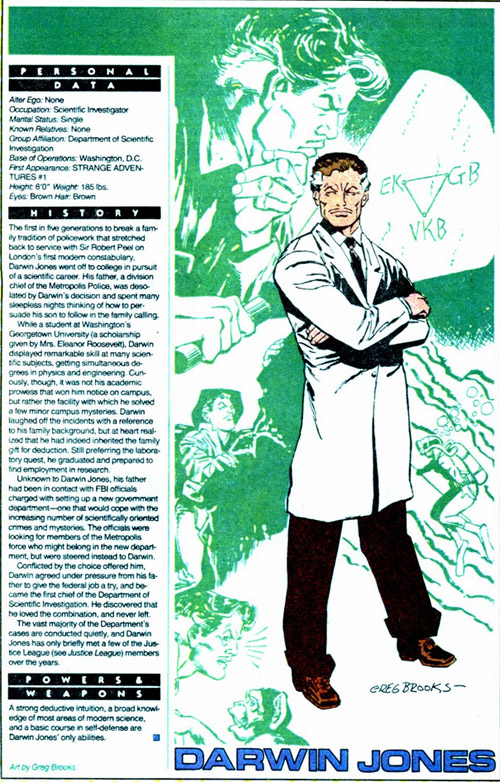 The facts: Though his stories were never labelled as Darwin Jones adventures (ergo, the lack of a classic logo), the Chief of Staff (later, Director) of the Department of Scientific Investigation (DSI) did appear in a fair number of scientific mystery stories published in Strange Adventures. He was in the very first issue (1950), created by David V Reed, and would later appear, rather irregularly, in issues 48, 58, 66, 70, 76-77, 79, 84, 88, 93, 149, and 160 (in 1964). His Who's Who entry seems to be based on the fact he'd recently appeared in more than half of DC Challenge and in the seventh issue of Daring New Adventures of Supergirl back in 1983.
How you could have heard of him: Darwin Jones has made minor appearances in various books since his Who's Who entry - in Power of the Atom #15 (1989), Action Comics #683 (1992) Underworld Unleashed: Patterns of Fear #1 (1995), and has more recently been referenced (but not seen) in Final Crisis and Justice League: Cry for Justice.
Example story: Strange Adventures #66 (1956) "Strange Secret of the Time Capsule!" by Otto Binder, Gil Kane and Bernard Sachs

The DSI is a top secret organization "called on to solve the unsolveable... to explain the inexplicable... and to understand the things that few men on this Earth have understood". It was the 50s. The US government was actually interested in knowledge ;). Today, these guys are studying Big Bang particles, anti-vaxers, and Donald Trump's hair, but back then, they were examining... Roman time capsules made of impossible-to-scratch metal! 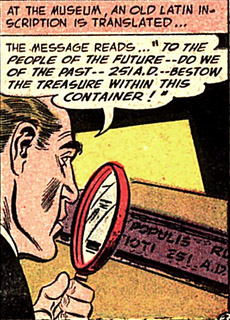 Well, Darwin Jones doesn't give up easily. Except a blowtorch won't melt it, a diamond drill breaks instead of piercing it, and even X-rays won't penetrate it. So this top secret organization does the only thing it can: Broadcast a P.S.A. 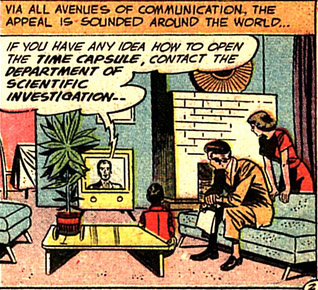 Many people respond with various solutions, but it's a locksmith with a skeleton key who finally manages to open it. But Darwin knew someone would come forward with the solution (have you guessed why? I gave you all the information you need already). Before he can tell us what he's thinking, the locksmith vanishes, and TV cameras rush into the room to see what's in the capsule. THIS IS MUST-SEE TV!

Some news aren't as "breaking" as you think they are, 1950s TV. So the wand ends up in a museum and attracts lots of visitors (see, 1950s TV? if you were any good, people would stay at home and watch you instead!), including Darwin who expects something to happen. One morning, they call him to say it has. The wand has been stolen. Simultaneously, there's crime wave sweeping the city. 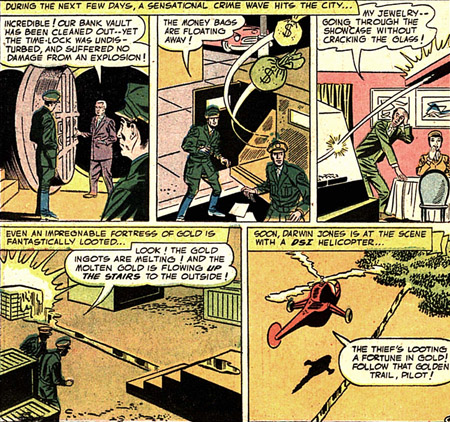 Somehow, the loot is floating away by itself, and through walls! Following the trail of that gold in his science-copter (my word), Darwin Jones catches up to the mysterious locksmith. And he's dressed in a science fiction costume! Damn, it's one of those criminals from future. 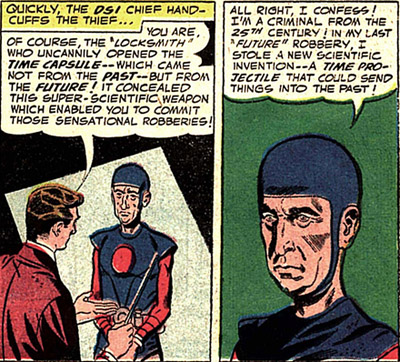 He "had no future in the future" so he stole a "Time Projectile" and put his wonder wand in it, shot it back to our century to be discovered by archaeologists. When he saw the test was successful (thanks to archived news reports), he got into a larger projectile and shot himself into the past as well. So the question remains... LEARNING! Well, ok, that's all well and good, but it's not like that crucial clue is how Darwin defeated the Locksmith. He just followed the flowing gold to the guy's lair and sort of punched him into submission. He could have done that even even if he didn't know anything about the time capsule or the wand. It's irrelevant. Hmf.

The point of that ending? To be condescending to the guy from the future. This is why people don't like nerds.

Who's Next? I have half a mind to research Dr. Ub'x. He is a space beaver, after all.
Comics Silver Age Who's This?

2.) Dr. Ubx is definitely worthy and has a lot to unpack... like the Psycho-Pirate, he remembers the pre-CRISIS universe, he's responsible for the creation of a new sentient race that will come to power thirty six centuries from now, and he's a tribute to Ub Iwerks. Good stuff.
August 13, 2015 at 7:27 AM

Green Luthor said…
Hm... does that mean if Future Locksmith Guy had inscribed "CCLI A.D.", Darwin Jones wouldn't have been able to figure out it was a fake? I'm not sure we should be impressed by Dr. Jones' credentials, since the A.D. calendar era wasn't even devised until 525 A.D., let alone adopted into common usage. (But then, Dr. Jones didn't have Wikipedia to lean on...)

locksmithingny said…
I'm truly enjoying the design and layout of your site. It's a very easy on the eyes which makes it much more pleasant for me to come here and visit more often. Did you hire out a designer to create your theme? Superb work!

Siskoid said…
The credit is at the bottom of each page. The design is available to anyone who would like it. I found it because a friend of mine's cooking blog used it and I was looking for something that allowed for more articles to show on the main page, thought it was clean and cool too!