Who's the Phantom of the Fair? 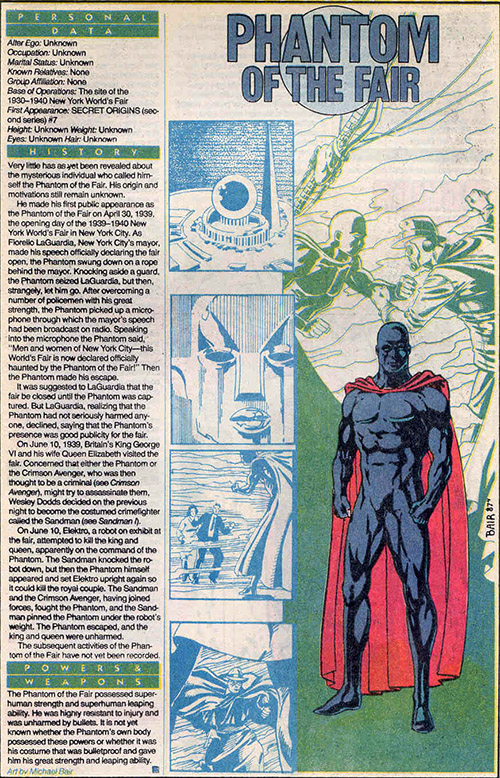 The facts: Here's the thing. The Phantom of the Fair first appeared in Secret Origins #7 (1986) as part of the Sandman's and his entire Who's Who entry is about that incident. His story would continue in a later issue of All-Star Squadron (#65), but not much of a resolution there. Before this point, however, he is not actually a DC character. Roy Thomas pulled a public domain character published at CENTAUR during the Golden Age, so the Fantom of the Fair (note the spelling) did enjoy a fair, if not stellar, run in the pages of Amazing Mystery Funnies, first appearing in vol.2 #7 (1939) and running until vol.3 #8 (1940), 14 issues in all. In the last, he was called Fantoman.
How you could have heard of him: As the Phantom of the Fair, his connection to Sandman would be reused in an eponymous story arc in Sandman Mystery Theater (#41-44, 1996). When Malibu Comics started using old Centaur characters as their Protectors, the Phantom was re-imagined as Gravestone, not that anyone us supposed to remember any of that more clearly.
Example story: Amazing Mystery Funnies vol.2 #7 (#11 overall, 1939) by Paul Gustavson 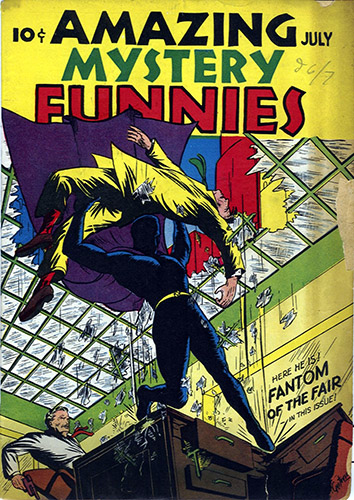 It's the first appearance, and why not. I certainly don't want to delve into later stories where they give the Fantom a colorful half-mask. Gross. Why would you mess with such a strong look?

So though other heroes patrol entire cities, or even planets, the Fantom only looks after a single theme park. How much crime can there be at New York's World Fair? Enough for 14 stories? Well, in the first installment, a sniper shoots the rope holding a painter's scaffolding and he would have plummeted to his death had the Fantom not swung in to save him. The next swing takes him to the sniper's rooftop where...

From there, he'll carry that goon Bane-style for another two pages - which in Golden Age terms, is an eternity - while the resident mall cop refuses to listen to eyewitness accounts and decides the guy in the black leotard has to be the bad guy. That's costume profiling! 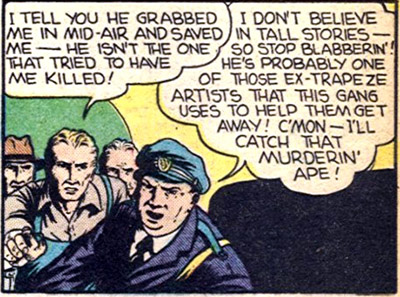 Yes, one of those ex-trapeze artist crooks all the best gangs are using these days... The Fantom and his prisoner escape Fair security with amazing speed and well-placed trap doors. And UNDER the fairgrounds? A cave system complete with a river and a torture chamber.

Faced with waterboarding and 99 other torture techniques, the goon spills the beans. He's been hired by Occo the Contractor to cause accidents for Johnson his rival so he can poach the lucrative Fair contracts. I'm not sure I would have hired a sniper for this, but then I'm no construction criminal. After hypnotizing him and wiping his memories, the Fantom brings his pet rat to Occo's office.

Meanwhile, the authorities are looking up the Fantom in a book of Scandinavian legends, as they relate to the Fair... uhm... I don't know what's going on there.

No matter, when we catch up with the Fantom again, he's breaking desks (see the cover, above) and giving Occo a good talking-to. But the mall cop shows up, so the Fantom escapes, the art absolutely refusing to follow the narration's order to draw a proper chandelier. 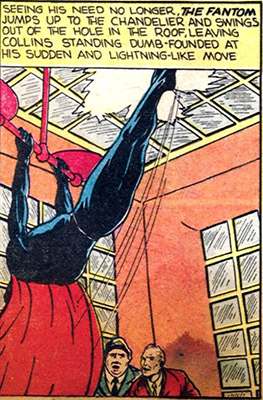 Missed him again! And yet, there's obviously a reason for the Fantom's actions and Occo is interrogated on the spot about his possible criminal activities. He won't admit to anything, so the Fantom does his ghost thing - walking through walls. Or something like it:

Oh geez. Just creating more contracting work, when you think about it. Occo chokes out a confession, which I'm sure is admissible in 1939 court. The copper now sides with the Fantom, but vows to one day figure out what makes him tick. Would he succeed? Not really. The Scandinavian connection feels like such a non sequitur, I think I'm gonna go with the Fantom being Paul Gustavson's alter ego.

Who's Next? A character who really only exists because of a licensing problem.
Comics Golden Age Who's This?

American Hawkman said…
I'll note that a later story mentions that the Fantom had fought the threat of the day 10000 years previously, probably tying into the myths and legends bit from this.
October 8, 2015 at 11:23 AM